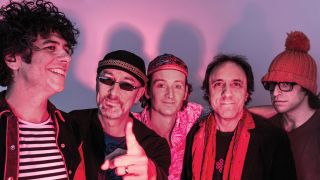 Kavus Torabi is addressing the somewhat incredible situation that he and his bandmates in Gong find themselves in. “You really have to not think about it because otherwise you become too reverential,” he says. “We’re going to have to do this our way.”

Gong fans will be familiar with what this situation is, but for those who aren’t, it’s quite a story. Over the past few years, Gong have been undergoing something of a musical renaissance, with leader Daevid Allen assembling a new line-up of the band, including Brazilian guitarist Fabio Golfetti (from Violeta de Outono) and bassist Dave Sturt (whose credits include Jade Warrior and Bill Nelson). In 2014, Allen recruited Torabi as an additional guitarist, despite having never heard the Knifeworld, Guapo and ex-Cardiacs man actually play.

But only a few months later, Allen announced that he had been diagnosed with cancer and would be unable to fulfil the world tour booked to promote I See You, the album they had just recorded. Reluctantly, but with Allen’s full encouragement, the rest of the band agreed to do the shows without their leader. And to their surprise, a new chemistry developed within the Allen-less Gong.

“Each night, we sent Daevid recordings or links to YouTube footage and from his sick bed in Australia, he wrote gushing praise about what had happened to the band and how this was exactly what he had hoped,” explains Torabi. “By the end of the tour, and with the full blessing of Daevid, we decided to carry on.”

Allen had clearly been planning his legacy carefully, and had every intention that Gong should live on without him. “For the last few years, he was always talking about a continuation; he was always looking for a new direction,” says Sturt.

We’re not one of those bands where you’ve got one original member and a load of young dudes playing the old material.

Allen died in March 2015, but the people he had entrusted with taking Gong forward had been well chosen, with each member strongly identifying with the ethos of the band, as well as its unique sound. Sturt was attracted to the “craziness mixed with musical complexity”, while for Golfetti, it was hearing Gong in his teens that made him want to be a musician in the first place. Torabi was another teenage Gong obsessive. “When I first heard Flying Teapot, it was everything I’d been looking for,” he says.

Gong’s outsider, countercultural stance was also hugely important to Torabi. “Absolutely,” he confirms. “It’s only when you start meeting bands that you realise how few actually think that way.”

“It’s never conformed, which is probably why it’s never made any money,” comments Sturt, with characteristic dry wit.

Gong’s decision to continue without either its founder or any original members isn’t without precedent – Golfetti cites the Sun Ra Arkestra, and Torabi mentions Napalm Death – but what’s different is their commitment to strike out on their own terms, respecting the band’s heritage but determined to take it somewhere new.

“We were all fairly sceptical,” says Torabi about the thought of Gong continuing. “But we’re not one of those bands where you’ve got one original member and a load of young dudes playing the old material. It’s kind of a brand new band, but with this blueprint to draw from and create stuff in the style of. It’s more like a political party… one that’s getting more extreme!”

However, there’s no question that this is still Gong. “As a Gong fan, I know for a fact that the version we do of Master Builder is outrageous, it’s so out there – [former guitarist] Steve Hillage loves it,” says Torabi.

Sturt agrees: “There’s been lots of discussions with the old guard. They all want it to carry on. They appreciate where we’re taking it. Steve Hillage has been very supportive.”

The new album in question is Rejoice! I’m Dead!, a stunning hour of modern psychedelic/progressive music that affirms the new Gong as a serious creative force in their own right. While there are connections back to the classic ‘Radio Gnome Invisible’ trilogy of albums from the mid-70s, and particularly to the heavier sound of Planet Gong’s Floating Anarchy, it’s a vital and exciting piece of work with brilliant playing throughout from Torabi, Golfetti and Sturt, as well as returning sax and flute player Ian East and new drummer Cheb Nettles.

“As soon as we started playing with Cheb, a new dynamic was created,” says Torabi. “During the big improvisational parts in the middle of things like You Can’t Kill Me, we really started feeling, ‘We’ve got something here.’ The music started going in directions it hadn’t done previously. So we knew that if we got to make another record, it was going to be really good.”

Yet despite this self-belief within the band, the pressure to deliver was still high. Torabi explains: “We all knew this had to be an amazing album, because otherwise that’d be the end of it. If it had just been Angel’s Egg 2, or even I See You 2, people aren’t going to buy into it.”

Perhaps inevitably, nerves kicked in. “I’m always the stressy one, and once we got locked into it happening, I had a bit of a meltdown,” confesses Torabi. “I was so worried because, having signed a record deal, we didn’t have any songs. Dave got it in the ear – I rang up and was just freaking out!”

Sturt adds: “But just from the first session between myself, Kavus and Ian, loads of ideas came out, many of which ended up on the album. And then Fabio sent through a demo of five or so ideas, and suddenly everything coalesced within a few weeks.”

As the songs came together, Allen’s presence was still being felt by the band, as Sturt elaborates: “I could absolutely imagine Daevid dancing round the rehearsal room because it really felt like he would have loved what we’d done. We were firing on all cylinders, which is what he would have wanted.”

Allen is also literally present on the album, with old recordings of his voice popping up on a couple of songs. Beatrix in particular sounds like a poignant dispatch from the afterlife (where, naturally, everybody speaks French). But on the whole, while retaining the charm and eccentricity of Gong, Rejoice! I’m Dead! is a good deal less whimsical than previous releases, with the band electing to emphasise the more radical agenda that Allen was increasingly pushing in his lyrics. There’s certainly no mention of gnomes or pixies.

“The Pot Head Pixie thing was Daevid’s vision and it would have been bogus to take that on and write another chapter,” says Torabi. “But with the more radical thing, that was something we could all take on. It was nice that Daevid was steering the ship this way because we all get that.”

“He thrived on the whole Occupy movement, and he loved the idea of standing up to The Man,” adds Sturt.

Allen tapped into this growing feeling of popular discontent on I See You, with lines such as, ‘This revolution will replace all those greedy capitalists who so fucked up.’ The Sturt-penned Model Village on the new album reciprocates the sentiment, being a Floydian vision of suburban hell where ‘Power and riches reside in the hands of the few.’

Even more strident, musically as well as lyrically, and perhaps the most un-Gong-like song on the album, is the predatory Sturm und Drang of Kapital, which comes on like a demonic cross between Sabbath’s Children Of The Grave and Eno’s Blank Frank. Even more surprising, it’s the one song on Rejoice! I’m Dead! that’s an Allen composition.

“When we heard Kapital, we all wanted to do it,” says Torabi with undisguised glee. “And it’s like, ‘My God, this is Gong’s most metal tune. And if we’re going to go metal, let’s go metal up the ass!’ But at the core of it, it’s a Daevid Allen song. It’s not like we took liberties.”

The other overriding theme of the album, from the title onwards, is, of course, Allen’s death. “As this is the transitional album, it felt important to make it about Daevid, like this was handing over the baton,” says Torabi. “Daevid seemed to have a certainty about death – he certainly embraced it. One night in Brazil, he had become convinced that this was the night he was going to die – he had his body painted all white and had a death ceremony. Then the following morning, he found out that [French drummer] Pierre Moerlen had died. He said he realised he’d had a premonition, but it was about the wrong person.”

Yet despite this talk about death, the mood in the Gong camp is exuberant – it’s the confidence of a band who know they’ve pulled off something special.

“All my experience before joining Gong feels like it was building up to this point,” says Sturt, and Torabi is equally upbeat: “It’s like we’re in a teenage band, only everybody’s really good now! I just want us to make another record, and I really want to go out and start playing this music…”