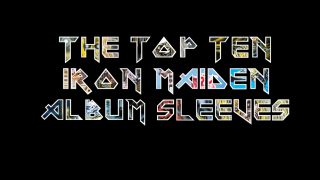 On March 16, we asked you to tell us what your favourite Iron Maiden album artwork was. And you replied in your thousands. The votes have been counted, so now, we present Iron Maiden’s top ten album sleeves – as voted for by you.

**10. Piece Of Mind (1983) **By 1983, Eddie was well established throughout the metal world, so it was something shock when they chopped his hair off. Not nearly as much of a shock as when they cut his brain out and locked him away for good measure – perhaps as a punishment for attacking poor Icarus with a flame thrower (1). Perhaps the least complex or detailed of all the 80’s Derek Riggs (2) LP covers but striking nonetheless, the bolt used to reattach his skull would become a feature of nearly every Eddie to follow.

**9. Iron Maiden (1980) **This is where it all started! Before Bruce and Blaze, and even before Paul Di’Anno, there was man called Dennis Wilcox (3) who sang for our heroes. During Prowler he would don a mac and mask, draw a sword through his mouth, then spit blood everywhere. When he upped sticks, Maiden lighting tech Dave Lights hooked up a mask and small pump to spurt blood over their poor drummer. The planets aligned when the band stumbled across a painting entitled Electric Matthew Says Hello! Rechristened Eddie after the head-based gag, it was a snarling, wild eyed monster allegedly based on a Vietnam War GI’s severed head; clearly the perfect representation of the aggressive young upstarts from the East End. The wall is still there (4) (Endymion Road, around the back of Finsbury Park, if you were wondering) although Eddie has since moved on.

**8. Brave New World (2000) **When the news emerged that Bruce was back in the fold, hopes were high but many asked could they really revive past glories? The answer was no – they would surpass themselves, becoming bigger and better than ever. Based on the Aldous Huxley book of the same name, the cover featured Derek Riggs’s Eddie as an angry looking cloud, looming over Steve Stone’s futuristic city scape and was to be found on stages across the continents as they reclaimed their title of greatest metal band in the world.

**7. Fear Of The Dark (1992) **This was the first time Maiden had used anyone other than Riggs to paint the cover, who was synonymous with the band by this point. Melvyn Grant’s take on Eddie was part pagan Green Man, and part twisted Gremlin. In retrospect, the change in artist coincided with many changes both in personnel – it would be Bruce’s last album for a while – and the band’s sound, too, as Maiden’s song writing became far more introspective and personal. The album was less than well-received by the critics at the time, but can you imagine seeing a Maiden set without them performing the title cut?

**6. Killers (1981) **What a difference a year makes. The follow-up to their self-titled debut album sees Eddie transform from a open-mouthed zombie punk to a axe-wielding maniac. This was the first Iron Maiden album where Riggs allowed background details to really flourish; you can see the Ruskin Arms pub (5⁄6) where the band first cut their teeth and elements of his neighbourhood around Etchingham Court in London’s Finchley (7). Can you spot the naked lovers entwined whilst foul murder was committed outside their flimsy curtain?

**5. Number Of The Beast (1982) **This cover was originally designed for the cover of the Purgatory seven-inch (8), but was eventually used as the artwork for Bruce Dickinson’s first album with the band. Eddie features as a puppet master controlling the devil, who in turn is controlling his own miniature mascot, whilst all the while thousands of souls writhe in torment in the fires of hell. What was going on in Derek’s head at the time? Interestingly, the ominous black clouds were somehow printed as a less than doom-laden light blue on the first press.

**4. Live After Death (1985) **Not only is this one of the greatest live albums ever made, but features one of Eddie’s finest incarnations. Clearly bored of the afterlife as a God and having found time to grow his hair back, Eddie was to be found erupting from the grave during a thunderstorm. You’ll find the full gatefold cover repays hours of scrutiny, and the inclusion of a massive booklet insert made this Maiden’s most impressive packaging of the 80s. Plus, there’s a brilliant Grateful Dead joke hidden on the back of the sleeve…

**3. Seventh Son Of A Seven Son (1988) **A concept album dealing with mysticism, a prophetic vison, reincarnation and the afterlife? You’re going to need something pretty incredible to do that idea justice, and Riggs delivered in spades. Plenty of heavy symbolism here in the icy landscape wastes while a disembodied Eddie – supposedly due to Derek tiring of drawing him – emerges from the water, pregnant with the seventh son. Freud would have a field day. Some might argue that this was Maiden’s finest hour, and they could well be right.

**2. Powerslave (1984) **You know how people go on about the superiority of vinyl? Powerslave is the reason. Not only did it sound amazing (and still does, obviously) but features one of the greatest covers of any records, ever. Having lobotomised Eddie, where do you go next? Make him an Egyptian god. Close up, the detail was astounding; 80’s headbangers would spend hours pouring over the little details whilst spinning the vinyl – Mickey Mouse’s face sits alongside an engraving which ‘Indiana Jones was here 1941’ (9), while another reads ‘wot no Guiness?’ (10). Plus, the entrance to the tomb is decorated with Riggs’ distinctive signature, which has been drawn by every Iron Maiden fan in the world. Just try finding these details on an MP3!

**1. Somewhere In Time (1986) **Could Iron Maiden ever top the cover of Powerslave? As it turned out, the answer was an emphatic yes. With its incredibly detailed Blade Runner-style background, and Eddie returning from the grave as some sort of Terminator-esque cyborg, Somewhere In Time was Derek Rigg’s masterpiece. As ever, the devil is in the detail on the album’s gatefold sleeve, including: bassist Steve Harris’ beloved West Ham thrashing Arsenal (12), a digital nod to their 1984 single 2 Minutes To Midnight (13) and Bruce Dickinson clutching Eddie’s brain from the 1983 album Piece Of Mind (14). You could spend hours staring at this art, so it’s obvious why this album sleeve remains Iron Maiden fans’ favourite almost 30 years on…