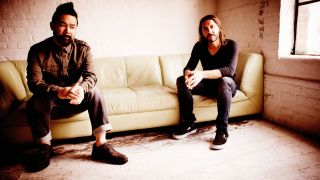 When it comes to U2, Feeder’s Grant Nicholas is something of a fanboy. Following the band for over three decades, he got the ultimate payoff when Feeder were asked to join U2 as support for the Vertigo tour in 2005.

Below, Grant recounts what made The Joshua Tree so special to him when it was released 30 years ago, and what it means to him today.

Were you already a fan of U2 when they released The Joshua Tree? How did you discover the album?

I knew the band a bit from some of their earlier albums, and we used to cover Sunday Bloody Sunday in my school band.

Do you remember the first time you heard it?

I bought a copy of it when it first came out as I was already a fan by then, and after hearing Where The Streets Have No Name.

Did you love the album straight away, or did it take a bit of time for you to come round to it?

It was pretty immediate if I remember, as the songs were so strong. I loved the production from Brian Eno and Daniel Lanois.

What was it about the album you liked?

I liked the sleeve – the black and white Anton Corbijn photography – and the anthemic production of each song. I have always liked The Edge’s guitar style, and he has influenced a lot of players of today. The Joshua Tree has some of bono’s best vocal performances too.

Has that appreciation changed or developed since the album was released?

I still think it’s a great record and one of – if not the most – memorable moment in U2’s work to date.

Does it remind you of a particular time, stage or moment in your life?

It reminds me of growing up in South Wales as a kid, and I remember going to see them on the Joshua Tree tour at the NEC Birmingham. Bono’s voice was shot but it was a great show, and he managed to pull through to the end. They opened with Where The Streets Have No Name and it blew me away.

What was the impact of the record on you and your songwriting?

I think maybe just trying to sometimes write songs that could can fill an arena or stadium space and really take you on a journey.

You’re a fan of U2. How did that effect your experiences of touring with them?

It was just great to play all those massive stadiums and experience the sheer size of the production, after being a fan as a kid. U2’s audience were appreciative to the support acts also, so we had fun.

30 years on, how would you sum up the legacy of the record as a fan?

Still a timeless classic, and one album I will always keep a copy of.

Reissues of Feeder’s Generation Freakshow and Renegades will be released on March 24th, and are available for pre-order now. You can catch them on the tour dates below:

The Story Behind The Song: Buck Rogers by Feeder

U2 Bono's shades a result of chronic eye condition