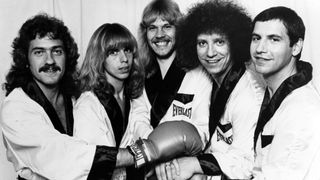 AOR, or ‘Album/Adult Orientated Rock’ to use its often disputed full titles, is also known as melodic or soft rock, even hair metal. Arguably the greatest AOR group of them all were (and still are) Journey, who said goodbye to their jazz rock roots to seduce the North American airwaves with a combination of lighter-waving ballads and raunch during the 1970s.

So, let’s rewind to those times awhile. All the following records were released between 1970 and the end of the decade. And although it’s generally considered that it was the 1980s when AOR truly cleaned up – Bryan Adams, Michael Bolton, Heart, REO Speedwagon – the next ten albums are proof positive that when it came to AOR, the Seventies could easily hold its own.

Essentially a vehicle for studio boffin, guitarist and all-round perfectionist Tom Scholz, Boston seemingly erupted to the top of the chart from nowhere, a refreshingly direct set of tunes that became one of the fastest selling debuts of all time. Although encased within neat Saccharine-coated shells, Peace Of Mind, Long Time and Rock & Roll Band all fizzed and popped with contagious energy, overlain by the shrill vocals of Brad Delp. Bizarre, then, that Nirvana’s Kurt Cobain was said to have been inspired by lead track More Than A Feeling in writing Smells Like Teen Spirit.

Every self-respecting rock fan should be familiar with Kansas’ signature hit Carry On Wayward Son. But for those still unaware, Leftoverture is the mesmerising album from which the six-man group’s classic song was lifted. Though Kansas went on to make many more albums, Leftoverture’s diverse mixture of uplifting, melodious pop and hard-driving prog-style instrumentation has yet to be matched. Steve Walsh is at the peak of his vocal powers on Miracles Out Of Nowhere and The Wall. Even the six-part Magnum Opus is politely demanding, but never too hard on the ear.

The Grand Illusion was the first Styx album to sell a million copies. In doing so, the Chicagoans initiated a record-breaking run of four triple-platinum selling records. It was easy to see why. Resident babe magnet Tommy Shaw assured the quintet of huge female support, though the sturdy likes of Superstars and Miss America also tapped into the archetypal rock dream. Later lampooned in the cartoon South Park, keyboard player Dennis DeYoung’s interstellar epic Come Sail Away also sounds unfeasibly grandiose.

Featuring 70s US pop star Rex Smith’s brother Michael on vocals, Starz played mildly sleazy yet unmistakably classy rock, infused with smart, poppy choruses that dimly recalled all-night parties and wild women in tight dresses. Like its self-titled predecessor, Violation was produced by Jack Douglas, of Aerosmith fame. Cherry Baby came within a smidgen of giving Starz the hit that might have ignited their career, but far from diminishing with time, Rock Six Times, All Night Long, Subway Terror and Sing It, Shout It all somehow retain their original resonance and vibrancy.

Opening with the pulsating, aptly titled Feels Like The First Time, then slamming home with the almost impossibly anthemic Cold As Ice, Foreigner’s self-titled debut was one of the biggest albums of 1977 – no mean feat at a time when the charts were plagued by disco. Strange to think that every label in America had snubbed the sextet before Atlantic’s John Kalodner spotted their potential. Foreigner moulded elements of hard rock, progressive rock, R&B and pop into a cohesive whole, with Lou Gramm’s sashaying, soulful vocals their ace in the proverbial pack.

An early launching pad for the careers of vocalist John Waite (of Missing You solo fame), and future Journey keyboard player Jonathan Cain among others, the initially British-based Babys were forced to find their niche in the US with a quaintly effective balance of understated power and delicious melody. In addition to the estimable keyboard contribution of Michael Corby, producer Ron Nevison’s introduction of strings allowed the quartet to add extra colour to already ear-catching material such as the Top 20 hit Isn’t It Time, Golden Mile and Broken Heart.

In pure credibility terms, Toto not only hung themselves with their collective backgrounds as session musicians but also built the gallows and tied the noose. Even 27 years after its critically reviled unveiling, Toto still sounds impossibly assured – yes, almost to the point of being blasé. Songs such as I’ll Supply The Love, Georgy Peorgy and Girl Goodbye are blessed with a natural swing that their rivals could scarcely comprehend, yet alone attempt to emulate. Trading virtuosity for vigour, Hold The Line is a traditional white-boy rock belter that gave Toto a rare appearance in the UK’s singles chart.

Journey’s fifth album completed the metamorphosis from jazzers to arena-rock goliaths. Encouraged by the million-plus sales of its predecessor, Infinity, and Roy Thomas Baker’s production skills, the quintet’s sound became more streamlined and symphonic. Steve Perry’s most stratospheric lead vocal up to that point helped to coax Lovin’, Touchin’, Squeezin’ into America’s Top 20, while Do You Recall, Just The Same Way and the instrumental Majestic all became staples of the band’s live set. In the next decade and beyond, Journey would go on to make superior, landmark AOR albums.

With white satin costumes, ozone-hostile coiffure, a logo that worked upside down and a penchant for materialising ‘magically’ on stage, critics often accused Angel of placing showmanship before artistry. Well, they did share management with Kiss. Harder-edged than previous pomp-inclined releases, the group’s fifth album went some way to silencing the gripes. Fuelled by the flashy keyboards of future Guiffria/House Of Lords man Gregg Guiffria, Punky Meadows’s gritty guitar work and Frank Dimino’s high-octane vocals, its ten songs were all supremely memorable.

With their career overshadowed by Sylvester Stallone’s invitation to score not one but two Rocky films, Survivor nevertheless notched up a dozen songs to register in Billboard’s Hot 100. Featuring the cowbell-charged, metronome riffery of their first minor hit Somewhere In America (‘I need a teacher who could use a pet/Give me a lesson in etiquette’, croons Dave Bickler), Survivor was where it all began. An engaging blend of finely textured pomp, irresistible pop hooks and super-slick hard rock, the likes of Can’t Getcha Offa My Mind were indeed well named.

For more AOR gems and the incredible story behind the making of Foreigner 4, then click on the link below.

The Strange And True Story of Foreigner 4