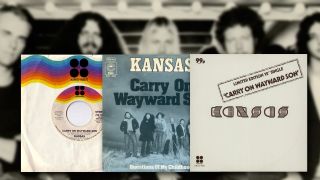 Carry On Wayward Son b/w Questions Of My Childhood

By 1976, Kansas had released four US singles, without even bothering even the lower reaches of the chart. But their fifth attempt changed everything. Carry On Wayward Son was actually edited for the single, with two minutes being shaved off the version featured on the Leftoverture album. It was the band’s only charting single in the UK, while in America only 78’s Dust In The Wind did better, reaching number six. Carry On… has become a regular fixture on popular TV series Supernatural, being used in the opening episode of each of the first nine series, to set the scene.

Where did the inspiration for Carry On Wayward Son come from?

“I have no idea! I was under such pressure to write the album at that point that I kinda launched myself into a gear that I had never had before. I was a writing machine. I’d come home from rehearsal having learned one song, and that night I’d write the next one. This went on for days. Steve Walsh wasn’t writing at that time, so it all fell to me. Carry On Wayward Son was the last one I wrote. It was the last night we were in Topeka. I came into the studio on the last day and said, ‘I think you better hear this one’. The guys looked at each other and said, ‘We gotta do this’.”

“Well, it went close to the top of the charts and stayed there for some time. It was a song where every component was a hook: the opening riff, the verse, the chorus, the middle section… Even the guitar solo was approached that way.”

“Well, no. We never felt like pop stars. We’d been beating the road for years and making albums. But that song opened the doors to a whole audience. It was the difference between being an opening band, and playing stadiums.”

Was having a hit a blessing or curse?

“Well, first of all, I’d say it’s a blessing. Even today, when the royalty cheques come in, it’s significant. Not only was it a financial blessing, but of course it opened up that whole new world of audiences for us. But it was also kind of a curse in that, as a writer, it increased the pressure on me to write hits. On the Point of Know Return album, we had to be all about writing another hit. Dust In The Wind was another similar case. It’s a gentle curse, though. I wouldn’t even use the word ‘curse’. Living up to it was the hard. And that’s what became challenging for the band members, living up to that expectation.”