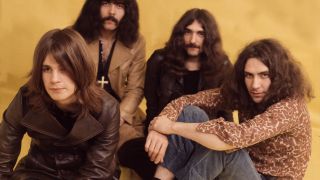 Almost 50 years after their landmark debut album, Black Sabbbath’s influence remains as strong as ever. Their first six Ozzy Osbourne-fronted albums make up one of the greatest runs in the history music, and they had some stellar moments afterwards – not least the two albums they made with Ozzy’s replacement, Ronnie James Dio. Their retirement in 2017 seemingly put a full stop on this most momentous – and frequenly turbulent – of careers, but thankfully they’ve left the world with an unequalled legacy. Boiling it down to the 10 best song hasn’t been easy. But we've done it…

During the recording of Master Of Reality, Tony Iommi took the decision to tune his guitar down three semi-tones in order to give Sabbath a weightier, heavier sound. That decision would eventually birth the entire stoner rock and grunge movements. One of Iommi’s favourite Ozzy-era recordings, Into The Void’s lumbering riffs and tempo changes gave it a jarring, dislocated feel. That Soundgarden, Kyuss, Melvins and Monster Magnet would all later cover the track is a testament to its influence and enduring power.

9) Symptom Of The Universe

It’s heavy, it’s savage, it’s aggressive, it’s melodic and it’s beautiful. It is everything that’s great about Black Sabbath rolled into six-and-a-half minutes. It’s probably the greatest and most brutal riff that Tony Iommi has ever written, Bill Ward’s drum fills are phenomenal, Geezer Butler’s bass lines are genius and add another layer of heavy, and Ozzy delivers his greatest vocal performance of all time.

Geezer Butler’s instantly memorable, fuzzed-out bass riff might have been blatantly indebted to Cream, but N.I.B. found Sabbath inventing a new vocabulary for heavy, blues-based rock. Honed during the band’s early residency at the Star Club in Hamburg, the song moves from that simple opening riff into a crunching descending chord pattern overlaid with a sparkling Iommi solo before resolving back to that intro. Written as a tongue-in-cheek “satanic love song” by Butler, the song was originally titled Nib, a nickname bestowed upon Bill Ward on account of his pointy beard. Butler added in the punctuation marks to make the song sound more “intriguing”. A joke it might have been, but it worked.

Over the years, Iron Man has become not only one of the cornerstones of the Sabbath catalogue, but also credited as one of the most important songs in the history of metal. For Geezer Butler, it’s the track that bests sums up the band. “I really do feel that when you listen to Iron Man, what you’re getting is the essence of what made Black Sabbath such a special band,” he offers. “It’s fairly simple, yet also has a lot of depth. I’m very proud of what we achieved here.” Who are we to argue?

Dashed off as a last-minute filler for Sabbath’s second album, Paranoid may not have ever been intended as an immortal anthem for the ages, but that’s what it has indubitably become. As humble as its birth was, it’s a textbook example of a classic heavy rock song: short, to the point, laden with hooks and performed with the kind of urgency and vitality that only young bands with big dreams and tons of confidence can muster.

5) Children Of The Grave

In his 2009 autobiography I Am Ozzy, the Double O hails Children Of The Grave as “the most kick ass song” Sabbath recorded on their first three albums. That annoying Americanism aside, he has a point. Chugging in on a classic, down-tuned Iommi riff, it’s both a song of its era (with Ozzy sounding not entirely convincing in his delivery of Geezer’s flower-power pleas for hopes and dreams of a brighter tomorrow for the children) and a blueprint for what would become the NWOBHM and later thrash metal. Stretching out suited Sabbath, and here their balance of brute force and fluid dynamics is showcased perfectly.

Tony Iommi was stricken with writer’s block when it came to working on Sabbath’s fifth album, Sabbath Bloody Sabbath, but you’d never know from the title track. Riding in on a mammoth Iommi riff, it merged a heavy section (‘You’ve seen life through distorted lies/You know you had to learn’, etc) with a lighter one (‘Nobody will ever let you know/When you ask the reasons why…’) to create light-and-shade contrast. Sabbath might have been heavy metal, but there was more to them than bludgeon. More importantly, it gave the band back their confidence. As Geezer Butler put it: “When Tony came up with the riff to Sabbath Bloody Sabbath, it was almost like seeing your first child being born. It was the end of our musical drought, the beginning of our new direction, an affirmation of life. It meant the band had a present – and a future – again.”

Rain falls. A church bell tolls. Thunderclaps resound. And then: ‘Dah- dah-daumm-mm! Dah-dah-daumm-mm!’ Tony Iommi’s funereal guitar tones jolt the dead into wakefulness. Listen carefully and you can hear desiccated corpses raising their fissured fingernails to scratch at cobwebbed coffin lids. ‘What is this that stands before me? Figure in black which points at me?’ wonders Ozzy, plainly caught up in the wheels of confusion. And that, right there, is the point where heavy metal as we know it was born.

Majestic. Other epithets can be applied to the title track of the rejuvenated Sabbath’s first record with Ronnie Dio, but ‘majestic’ pretty much covers it. Introduced by a thumping unison riff from Iommi and Butler, the track quickly drops down to bass/drums to showcase RJD’s remarkable voice, before exploding into a widescreen chorus, a choral midsection, a dazzling, effects-laden Iommi solo and an exhilarating, galloping coda rounded off by several classical guitar flourishes. Epic, adventurous, dramatic and uplifting, it’s little wonder Dio cited it as his favourite-ever recording.

It’s ironic that Black Sabbath were often painted as misanthropic harbingers of destruction and misery, when in fact there was a hypermoralist, humanist core to many of Geezer Butler’s early lyrics. Originally titled Walpurgis, a title rejected by Vertigo as “too satanic”, War Pigs was born out of conversations Butler had with returning Vietnam veterans on American military bases in Germany. The bassist was trying to paint a fantastical, Hieronymus Bosch-style vision of hell on earth, skewering “war-mongers… the real satanists… the people trying to get the working classes to fight their wars for them”.

Spawned from a club jam session, the track began to coalesce when Tony Iommi hit upon its iconic two-chord riff, Butler and Ward’s swinging, jazzy rhythm acting as a counterpoint to the stop-start dynamic. Producer Rodger Bain and engineer Tom Allom also made an important contribution, underpinning Iommi’s spiralling solo with a contrasting guitar line and speeding up the end of the song to accentuate its chaotic feel – a decision the quartet were initially uncomfortable with, but let go, correctly believing that no one would listen to them anyway. And with that, a doomy heavy metal masterpiece was born. “No wonder we never got any chicks at our gigs,” Ozzy later quipped.