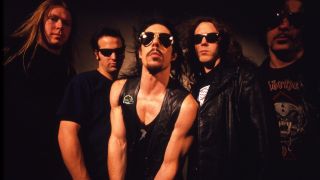 It’s so hard for me to choose my favourite songs from the Monster Magnet career, because they all mean something to me. But I suppose a lot of the time I’d go for the little songs, the ones which might get overlooked. So, I guess what I’ve chosen here will surprise people – because they’re not the obvious ones.

SPINE OF GOD (Spine Of God, 1991)
I remember walking around a shopping mall in New Jersey when the idea came to me about a serial killer murdering people at a Grateful Dead concert. Then, I finished the song idea on the beach. I had the music inside my head, and rushed home to record it on my four-track machine – and it sounded so cool!

LORD 13 (Tab, 1993)
What I love about this song is that I recorded it on that four-track machine I just mentioned, and then bounced it onto eight-track. Now, these days when I have 48 tracks or more available, that might not seem like a big deal. But back then… wow, eight-track. That meant everything, and it came out so well. I also like the fact that it has a Velvet Underground vibe on guitar. And it was fun to do!

BLACK BALLOON (Superjudge, 1993)
Now, this is one of those little songs I was talking about at the start. It’s my story, about leaving a small town in New Jersey and moving into the show business world, getting a big record deal and everything else that was happening to the band. That time had a big effect on me, and I lost some friends because of it. In this song, I managed to capture what it was like at the time. Besides, it was just such an easy song to write.

BABY GÖTTERDÄMMERUNG (Powertrip, 1998)
I just wanted to fit in the word ‘baby’ with a Wagnerian idea – the whole Twilight Of The Gods thing. That seemed like something cool to do. The song itself was a total confessional. Why am I? What am I? And I recorded it on a my little Rickenbacker amp, with the tremolo turned all the way up. It sounded fucking amazing.

MELT (God Says No, 2001)
Did you know that Jack Kirby, one of the greats of the comic book world, died the day after Kurt Cobain? But it hardly got noticed, because people were so obsessed with Cobain. Kirby was the guy who came up with The Silver Surfer, Doctor Doom and so many other classic characters. I just thought a little more respect and attention should have been paid to him.

LITTLE BAG OF GLOOM (4-Way Diablo, 2007)
In Too Bad, I talked about my optimism against someone else’s pessimism. Well, this song is me being pessimistic. It was about getting fucked up on drugs. At first, I thought I was talking to a girl in the song, but when I listened back, I realised I was yelling at myself. I wrote it on a Casio keyboard, which I loved working with.

STAY TUNED (Last Patrol, 2013)
I wanted to come up with a song to end this particular album. So, I sat down with an acoustic guitar and it was written in just half an hour. It’s about people my age who have one foot in the past, working in the analogue world, and one foot in the future. That can be very scary, and it’s the message I wanted to get across here.

COBRAS AND FIRE (HALLUCINATION BOMB) (Cobras And Fire (The Mastermind Redux), 2015)
Not the version on Mastermind, but the one we did for Cobras And Fire. It has a prog style. So, why do I like it so much? Because got to play the Mellotron.

Dave Wyndorf was talking to Malcolm Dome. Monster Magnet’s Cobras And Fire (The Mastermind Redux) is out now through Napalm Records.