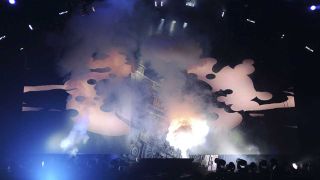 Somewhere in there, AC/DC are about to kick off their Black Ice set (Image credit: Kevin Mazur / Getty Images)

As you're no doubt aware, Iron Maiden staged an aerial dogfight before their headline set at Sonisphere in 2014, which might just be one of the grandest ways to make an entrance in rock history. But they're not the only ones who know how to kick off a gig in style, as we shall discover.

A band not given over to a less-is-more way of thinking, Kiss’s stage entrances have long been utterly spectacular. There are many bands who use fireworks, pyro, smoke, flashboxes, but it’s how Kiss pull it off that is so impressive.

Their 2012 tour featured them arriving on a fiery, floating, UFO-type platform, while a previous high was the 1990 H.I.T.S. tour, in which a giant Sphinx called Leon fired lasers across the auditorium before opening its mouth and spitting Kiss onto the stage.

In response to criticism over their inclusion at 1998’s Ozzfest, Limp Bizkit decided to make a point. So it was that, on the tour’s first date and for the rest of its run, they emerged onstage from a giant, filthy toilet while the PA blared the theme tune from Rocky. The point was reasonably clear: if you think we’re shit, then we’re going to come out fighting.

Hence Rammstein’s 2011 tour had quite the opening: a giant, industrial, metal scaffold running the entire length of the arena on which the band walked down over a cacophony of noise and hissing steam. Which beats “Hello, we’re Rammstein, this one’s off the new album” by some distance.

Rage Against The Machine

Not as gimmicky as much of the rest on this list, nor a stunt, Rage Against The Machine’s entrance onstage at 1993’s Lollapalooza is still one of the most memorable of all time. Furious at the campaign group PMRC’s attempts to censor rock music, the band walked out entirely naked except for a piece of gaffer tape across their mouths and the letters PMRC scribbled on their bodies.

They remained stock still for 15 minutes, then walked off. Point made. They later played a free show to make it up to upset fans.

The king of stage entrances, Alice Cooper more or less invented the dramatic arrival. Back in 1975, his opener consisted of him singing Welcome To My Nightmare while the characters from that bad dream – a spider, a bat, a ghost, a ballerina, some weird shit – danced around in perfect choreography. Freaky, odd and unforgettable.

Unafraid of a flashy entrance at the best of times, Mötley Crüe began their 1987 Girls, Girls, Girls tour with a pitch black stage. Then, as the drums began to beat, slowly things started to come to life.

Speaker stacks were lofted into the air on hydraulics, before drummer Tommy Lee emerged from beneath the stage in a drum cage that was then lifted above the band at the back of the stage. It meant that, both physically and mentally the drummer was often the highest person on the tour.

In the moments before The Darkness walked out onto the stage at Alexandra Palace in 2006, giant TV screens crackled into life and showed images of the band apparently arriving by helicopter. Lights swept around the room, and the sound of bagpipes erupted from the PA.

Drummer Ed Graham began the beat to Knockers as guitarist Dan Hawkins settled into its anticipatory riff. They just needed one thing to really tie things up: something that marked an impressive stage entrance while saying something meaningful about such a heartfelt song.

Cue singer Justin Hawkins arriving on a pair of flying, inflatable breasts – complete with light-up nipples – that swung across the auditorium. Job done.

Whatever you think of the right-wing, gun-toting, hunting enthusiast and guitarist, there’s no denying Ted Nugent knows how to make an entrance. Over the years, he has ridden onstage on a buffalo, dressed as a native American, and marked his arrival by leaping off a 25-foot stack of Marshall amps.

Perhaps his most impressive stage entrance was when he stripped off to a loin cloth and swung out on a rope like Tarzan. Not so good when it goes wrong, though.

Starting with an immaculately animated cartoon of an illicit liaison with two near naked girls in a train, which is blazed onto the stage’s big screens, the start of AC/DC’s 2008 Black Ice tour was already impressive. But when the train ‘crashes’ and bursts through onto the stage, amid a blizzard of pyro, the band proved they had still got it on the entrance front.

And finally, a stage entrance that has become iconic because it was so bad. Spinal Tap were always a band who – when not in Cleveland and therefore actually able to find the stage – were keen to make quite an entrance.

So, when they unleashed Rock ‘n’ Roll Creation, they upped the ante by beginning the show in plastic pods. The only problem was, bassist Derek Smalls’s failed to open. While The Tap might have been a spoof, incidents like this were uncannily familiar to a host of ‘70s rock bands, notably Yes, who suffered the same fate.