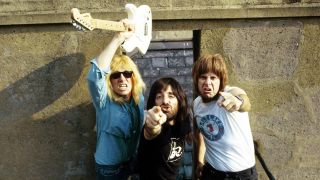 30 years ago this month, Spin̈al Tap released their debut album, This Is Spinal Tap (their real debut, not the in-film debut). And because we still love both the movie and the music, we thought we'd look back at just why Spin̈al Tap are the greatest band on the planet.

It Was So Brilliantly Well Observed

The ridiculous nature of many of the rock gods of the time were ripe for parody, but it would take a group of gentlemen that actually understood the world of hard rock rather than just mercilessly mock it. Spinal Tap were laughing WITH you, not AT you.

“He died in a bizarre gardening accident.” “She should be made to smell the glove.” It seems absurd now that a low budget comedy film could have given us moments as recognisable to a rock fan as devil horns and a denim jacket. You don’t even need to have seen it but we bet you’ve described something as ‘Turned up to 11’.

They Created The Blueprint For Modern Comedy

In an era of canned laughter and slapstick, the subtleties of This Is Spinal Tap seemed like comedy from another era. That’s because it was. Try watching The Office, Curb Your Enthusiasm, Modern Family, Parks And Recreation or Brass Eye and not see some form of influence from Christopher Guest and co. Spoiler alert: You won’t.

Spinal Tap were never a band or an idea that were meant to be judged by their music, but actually they’ve written some bona-fide hilarious bangers. Just check out THAT bass line to Big Bottom! Admit it, you’re nodding along.

You might not know the name but you’ll definitely know the face, Fred Willard is one of the finest comic character actors that the US has ever produced and his cameo as a, slightly too friendly, security guard is one of the many excellent cameos in the movie. Willard went on to work with Christopher Guest on almost all of his future projects… and is brilliant in them all.

They’ve Got Mr. Burns On Bass

Derek Smalls, aka Harry Shearer, is the voice of Homer’s iconic boss in The Simpsons. That’s pretty cool, right?

With the original cover art of Smell The Glove deemed too offensive the ‘None more black’ cover replaced it… eight years later the biggest metal band of all time’s biggest selling album featured a cover consisting of nothing but black. How’s that for influence!

For a fictional band they certainly have some famous fans! Spinal Tap have been joined onstage by everyone from Slash, Joe Satriani, Steve Vai and Phil Collen to… um… Cher and Jarvis Cocker.

Comedy metal? That’s a genre right? We’d point you towards Tenacious D, Steel Panther and the like and say yes it is. Tap got there first.

Their Folk Side Project Isn’t Bad Either

The three men that made up Spinal Tap, Christopher Guest, Harry Shearer and Michael McKean, donned different personas for Guest’s 2003 movie A Mighty Wind as folk trio The Folksmen. They managed to parody the folk scene in just as hilarious way as they did metal and the trio supported Spinal Tap on their final tour in 2009.

Hmm… maybe we should just compliment them for trying, eh?