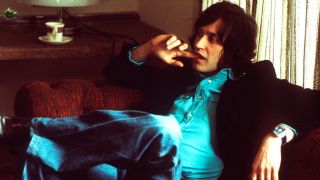 Ray Davies may have been the creative genius in the Kinks, but brother Dave was responsible for defining their 60s sound. The lead guitarist has a valid claim for having invented heavy metal via the roaring riffs of the Kinks’ monster hits You Really Got Me and All Day And All Of The Night.

He is articulate and outspoken, although somewhat less frantic than in his pill-popping 60s pomp. “I was pretty manic and driven back then,” he says. “Music was like a big green light going on in my head.”

There was a wild, cliquey little gang of us in the 60s – me, Townshend, Long John Baldry, Eric Burdon and Jeff Beck – and we used to hang out at the Scotch of St James. Me and Townshend used to spend a lot of time smoking joints in the back of tour vans.

The Kinks always used to look forward to playing on Ready Steady Go! because we’d always score drugs off Keith Moon. He’d be supplying us with uppers, downers and a bit of reefer.

The last time I saw Keith was about two weeks before he died. I was staying in the Hyatt House hotel in LA. He just looked different. He was in the bar on his own and looked sad and old. I was on my way out with a girl I’d met, and he said: “Oh, stay and have a beer with me.” It was said in the same way as my dad might say it: ‘Come and have a beer, son’. It was very odd. Maybe he was very lonely in the end.

There was a lot of mutual admiration between the Kinks and the Yardbirds. When Eric Clapton left and Jeff Beck came in, he got wrapped up in the glamour of it all and we got to be good mates.

I think he was actually trying to copy me. You know: “If Dave can do that, so can I”. We used to go drinking a lot and end up doing silly, childish, drunken things. One night we went down the entire road by walking over all the parked cars on the pavement. When we were drunk, we’d think: “Ah, that’s a good idea”. [Laughing]

Usually we’d get home at four in the morning and not remember a thing. Our main place was the Cromwellian club. Everyone you could think of would be there. We were all big drinkers. It was a very drink-and-drugs culture. Jeff was always a wild character. He had the potential to be really insane, I think. He was born to be Jeff Beck; he could never have been a conventional pop star.

In real life, Hendrix was nothing like the wild guy that he portrayed on stage. He was a quiet, introverted guy, like Ray was. He was explosive on stage, but very softly spoken off it. I’d see him from time to time at the Scotch of St James or at parties. We used to exchange the odd word to each other, but it was never like we were close. I remember once sitting next to him on a plane bound for Stockholm. After a while we got talking a little and he suddenly said to me: “Y’know, that guitar riff you did on You Really Got Me was a real landmark.” You can imagine how I felt. To be endorsed by Hendrix was really something. It was a great compliment.

The only thing me and [late Kinks bassist] Pete Quaife ever argued about was The Beatles. I never liked them but Pete thought the sun shone out of their arses. I used to say: “C’mon, Pete, we can do this stuff better than them!”

The Kinks opened for The Beatles at Liverpool Empire, and we were dying to see the guitars they used. We knew they were Rickenbackers. I was going to go up there and play one, but John Lennon wouldn’t let us touch anything. “Don’t you dare touch those!” He was a paranoid guy, but funny.

They were so protective of everything, with their posh suits and Beatle haircuts. John used to hang out at the Scotch of St James. I think he liked me, mostly because he knew I didn’t give a shit. My attitude wasn’t down to inner resentment, like his was.

A lot of his discontent was born from deep-rooted experience and resentment. But, unlike John, I’d had a great childhood. We were once both drunk, sitting at the table in the Scotch of St James. I’d had a few pills as well and he couldn’t stop me talking. As I was leaving, John said to me: “You’re one of the most obnoxious people I’ve ever met!” I took that as a great compliment.

Jimmy Page was a protégé of Big Jim Sullivan’s in the early 60s. They played on a lot of sessions together. In those days people formed bands and not everybody could actually play, so the record company or producer would bring Jimmy in to play guitar in the studio. It happened a lot back then.

Jimmy was always very quiet and unassuming, kept himself to himself. He’d be behind the glass at the early Kinks sessions, after [producer] Shel Talmy had called him in, in case he was needed. But he was never on those records.

Some people still think otherwise, but he never played on You Really Got Me or All Day And All Of The Night. That’s me on there. Later on, I’d bump into Led Zeppelin at the Hyatt House in LA. I saw them play in Hollywood, sometime around 1971 when they’d really made it big over there. John Bonham came up to me afterwards and said: “You know what? We just give ’em You Really Got Me all night. That’s what we do.”

I’m not putting down anyone else in the Stones, but Brian was the true artist in that band. Sometimes he was into the whole rock’n’roll thing, but other times he just wouldn’t play the game.

Someone might ask him something, and he’d just drift off or choose to look at a tree or a cloud. A lot of their early creativity was down to him. There’d be this great build-up to a Stones show, with people expecting lots of volume and noise. Then Brian would come on and play the guitar with a feather.

Every time the Kinks toured Paris, I’d meet up with a girlfriend there called Zouzou [actress and model Daniele Ciarlet] and we’d hang out, smoke weed and end up in bed together. We used to have a great time.

Then one day at the Scotch of St James, Brian and I got talking and I told him about this girl in Paris and how great she was. He looked shocked: “What? You mean Zouzou?” It turned out that he was seeing her too. So unbeknown to both of us, we were involved in a strange kind of menage-a-trois. It was a fantastic idea, actually, and I would have liked a menage-a-trois with Brian and Zouzou, but it never happened.

We’ve always had a strange relationship, and just don’t communicate these days. Yes, he’s a genius songwriter, but there’s other stuff you have to be accountable for as well. And Ray’s just not a nice person. He’s a sly, manipulative, nasty person. He’s treated me like a piece of shit over the years.

As kids, I’d be outgoing and carefree and very open, while Ray would be introverted, troubled and sneaky. He was never happy unless he was taking something from me. You can kind of live with that as children, but once you’re adults it becomes a real issue. When we were about twelve, our brother-in-law bought us each a pair of boxing gloves.

One day we were sparring in the old front room. I was quite a useful southpaw, and started leading and jabbing at Ray with my left. Then I suddenly caught him with a right-handed uppercut. He went flying and ended up smacking his head against the side of the piano.

He wasn’t moving at all, and I was going: “Jesus! I’ve fucking killed him!” So I took my gloves off and moved in closer. He still wasn’t responding, so I leaned into his chest to hear if he was breathing or not. And just as I did that he punched me right in the face with a big right-hander. Take from that what you will, but that just about sums up our relationship.

I probably would never have picked up a guitar if it hadn’t been for Eddie Cochran, but Chuck Berry was the key to everything that happened in the 60s. His lyrics were on a par with Dylan and my brother. I eventually met him at an airport in Atlanta. [Long pause] Shit, I’m getting emotional here. He had these great shoes – white and brown brogues, but kind of 50s style. I looked at him and was speechless.

Then he started swearing at some flight attendant who’d put him in the wrong seat. I was thinking, “Wow, I wish I could swear like that!” I was just completely in awe of him, while I think he just thought I was some cocky kid.

He ended up saying things like: “Sure, yeah, how you doin’?” and “Oh, you’re in a band called the Kinks?” Humouring me, I suppose. He was looking over his shoulder and waiting for the flight to be called and the lights to go up. He had incredible presence.

I never got to play with Chuck Berry, but I did get to play with Jerry Lee Lewis. That was a big mistake. He’d been another big hero as a kid. It was at an all-star tribute gig for him. I saw Brian May there, and teased him with the You Really Got Me riff, and all of sudden, from being the super-cool Brian May he turned into a little punk Brian May: [in a falsetto voice] “Oh, great to meet you, man!”

Anyway, me and Brian were plugged into the same amp, and James Burton was in the back-up band. But when we got going I soon realised that Jerry Lee Lewis was an arsehole. A complete arsehole.

I quickly decided to just get on with it and get through it. He had a terrible personality. He didn’t treat people well at all. Maybe he was like that because he was surrounded by arseholes himself. You know, he could win all the accolades he wants, but on his deathbed he’ll have to look at himself. When I had my stroke I came very close to death myself, so I know how that feels.