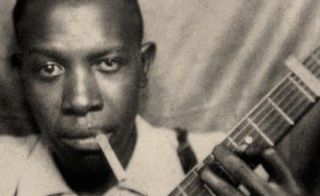 A master technician with an extraordinary touch, whose guitar style was also conversant with country and ragtime jazz, Johnson had a haunting delivery that Clapton once called “the most powerful cry that I think you can find in the human voice”. I Believe I’ll Dust My Broom, Sweet Home Chicago, Terraplane Blues, Love In Vain, Hellhound On My Trail and Traveling Riverside Blues are just a few of the essentials included on the classic collection, The Complete Recordings.

"It doesn’t matter that The Complete Recordings sounds old and scratchy. That just adds to the ambience,” says bluesman Walter Trout. “It takes you right back to the day when he sat in that room, in the sweltering heat, with all the windows closed, so they couldn’t hear the traffic out on the street."

“Robert Johnson was an incredible guitar player and singer. On these songs, he sounds like three guys, because he’s playing a bass line, a rhythm and slide leads, all at the same time. There are guys who can nail it note-for-note, but it’s lacking the spark of creativity.

“But to me, the reason he’s considered in a league of his own – among all those other guys like Blind Lemon Jefferson, Blind Willie McTell, Charley Patton and Blind Willie Johnson – is because of his songs. They’re universal and they’re lasting and they’re classic. In the canon of the blues, his songs are really top of the heap. My favourite is Love In Vain Blues. That one makes me weep. It tears me up. Cross Road Blues is incredible too, the guitar playing and the singing."

Central to Johnson’s enduring appeal is his air of mystery. An itinerant musician from Mississippi who was dead by the age of 27 – supposedly poisoned by the jealous husband of one of his sexual conquests – he is most often associated with the classic blues myth about selling his soul to the devil in a midnight pact at a Delta crossroads.

“That whole thing about going to the crossroads and selling your soul to the devil…" says Trout. "If you ever talked to BB King, he’d say: ‘No, that’s bullshit. The blues is beautiful. And beauty doesn’t come from the devil’.

“These songs were unknowingly instrumental in the creation of rock’n’roll. But one thing that’s kinda mind-blowing, when you hear Clapton and the Stones and all these people doing these unbelievable songs, is that the guy never made a dime. He was paid a total of thirty-eight dollars. That’s what he made off these songs. Hopefully his family is receiving royalties from all this. But even if they are, that’s still somewhat questionable. He’s another in a long line of originators of blues music who were born and who died basically penniless.

“So that’s a real travesty about this music. Its impact worldwide is monumental, but the guys who originated it never, ever received what they were due. And they died having no idea that their music was going to become immortal.”

Buy Robert Johnson's The Complete Recording on Amazon. Walter Trout's latest album, We're All In This Together is out now on Mascot.