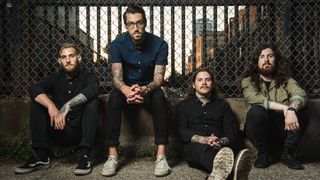 As they release their sixth album, Transit Blues, Ohio metalcore quartet The Devil Wears Prada are hoping for change. When Team Rock spoke to Mike Hranica, we found him in a contemplative state of mind; anxiety, equality and gun violence are all weighing on his mind, and he’s used the new album to make his views known.

You’re discussing some pretty personal subjects on the new album, like anxiety and the toll touring takes. Do you find being on tour difficult?

“Prada’s been an incredible vehicle for me to see some of the places I’ve been privileged to see, but it does take a toll and I do have a hard time keeping up my body physically. And there’s the mental aspect – panic attacks, which are not so much fuelled by being on tour, but a lot of times it’s that the excitement is a subconscious trigger. It’s not fun, but it’s something to deal with that made its way onto the album. We’ve been around for 11 years touring and I’ve said since day one that it’s not as glamorous as it’s often looked at.”

How do you deal with your anxiety?

“A lot of my panic feels like it comes in situations that I can’t control. It’s quite relative to what I’d consider claustrophobia. A lot of the time, especially on tour, what I find is good for me is napping. But if I’m out and about doing press or interviews, it’s not like I can lie down! So breathing, stretching a little bit, and just telling my mind everything’s going to be fine. It often doesn’t work so well, but that’s the steps.”

There’s a couple of novels that have influenced the record, especially The Mandarins by Simone de Beauvoir. What about that book inspired you so much?

“I’ve always been an avid reader, and all I wanted as a kid was to be a writer. So naturally, it reflects very brightly on my own work and what I want to achieve. It wasn’t that long ago that I first read The Mandarins, which is the main subject of our song Daughter. My girlfriend introduced me to her breakthrough feminism writing and I’ve read a lot from her, it’s all absolutely incredible. I’m rather nostalgic to that era, like Russian literature and Nabokov. In the last six or seven years, I’ve been getting into Chekhov and Dostoevsky. It all resonates loudly with me.”

There’s a line in the book where the writer says she doesn’t love her daughter, and you’ve recreated that in the song. What resonates so much with you about that? Do you have a family of your own?

“No, I have two dogs who are like my two daughters. But it was just the sheer impact of that climax in the novel very much fit with the rampant nature of our genre, and I thought it could be really cool to implement that into a song. It’s purely objective. I just found that passage to be so moving, and I actually jotted down the few pages where all these moments were occurring in the novel and was like, okay, if I ever have writer’s block, go re-read this.”

You’ve got Giuseppe Capolupo on drums - is he a permanent replacement?

“I totally perceive it being a permanent replacement if things go well. He’s done a handful of songs with us this year but he’s not done a full tour. I love Giuseppe, I’ve known him for about 10 years now, we played some of our earliest shows together. I’ve always stayed in touch with him; he’s an outstanding friend and a machine as far as playing drums goes. He came in and wrote the drums for the album in about three days. He’s insane. He’s definitely who we want to have behind the kit.”

Was it amicable splitting with Daniel?

“I’ve never wanted to be dramatic – I hate it when things like that in this scene make the news, it’s almost like paparazzi reporting on a certain couple breaking up. I don’t find any place in music for that. I try to avoid things like that which is why we’ve been quiet on the matter. I wouldn’t have considered it amicable, maybe things will work out in future but it’s not something I’m enthusiastic to comment on.”

You’ve got Dan Korneff producing again – what did he bring to the album? Did you know you wanted to work with him again after working with him on Space?

“Yeah, we did. Dan has mixed a few of our releases in the past and it was just a matter of time before we could get into the studio with him, which was the Space EP, and it just worked out perfectly. Dan is very much on our same page; he’s open and willing to explore different tones and find different voicing in our songs which is something I’ve always been very intentional about. I can’t say enough good things about Dan, he’s the right fit for us.”

You’re also talking about gun violence, and it feels like a pertinent time to bring the subject up with the recent spate of shootings in the US. Is that something that’s been on your mind for a while?

“I’ve been here in Chicago for coming up on eight years now. The murder epidemic is outstanding compared to a lot of other places, in the most tragic way. I remember a few years ago a mother lost a few of her children all due to gun violence, whether it was gang involvement or sheer tragedy of a drive-by. This topic has been hot on my mind for quite a while. When we wrote the song, it was only a few days after the tragedy in San Bernardino. When we sat down with guitars and said, ‘What are we going to do here?’ it felt natural to approach the gun situation. It’s not a matter of taking away your gun or being anti-military, but it is something that we want to approach. It’s also a bit of a calling for musicians to have a stance on this and try to influence change. I think it happens a lot in indie and rap, but in the metal scene we keep talking about the exact same things and it’s boring! I’d like it to spark people to have a stance, for people to vote. I think Lock and Load is the most complicated song on the album. It really upsets people – pro-gun people here in the States hate this conversation, but it’s something we find that needs to be had. It needs to change.”

What kind of gun reforms would you personally welcome?

“Personally I would go to the extremes. I know people would hate to hear that. I don’t own a gun; certain guys in the band do own guns, but for me personally, I don’t see the purpose. I look to places like Australia and their gun reform and how successful it is, so I’ll vote for anything I can to limit what’s happening. We need to start at least at not being able to grab a gun online without a background check.”

Do you hope more musicians might speak up about social issues?

“Yeah, it’s not even this matter specifically. Why hasn’t metal been more upfront about same sex marriage and every person being equal? These are things we need to be talking about. Even on our end, these are things that we haven’t talked about enough, as far as pro same sex marriage or equal pay in the workplace. It’s absurd these things are still occurring in 2016.”

Some people might expect you to have more traditionalist views, given that you’re a Christian band.

“Yeah, certainly. We still play a lot of Christian music festivals here in the States, and it’s rather alienating to us to be as progressive and liberal as we tend to be. I think a lot of that is because half the band is here is Chicago and that’s the community we have here; equal rights across the board is something that we absolutely cherish. Frankly I have no idea why that isn’t more a part of the conversation in Christianity. I don’t have an answer. But I still am a person of faith and that’s how it’s always been, and I think that if one were to ask me to look through the lens of Christianity, it feels like the topics I want to talk about are more Christian than things like the woman in Kentucky who wouldn’t give a marriage certificate to a gay couple. That’s entirely backwards from the way I view it.”

Do you still incorporate the non-materialistic message you started the band with into your current material?

“Not so much in the foreground. To me, it’s not so much ruling against possessions as forthright as I was about that early on, but it’s more about people that buy expensive or crazy things without donating. I much prefer philanthropy and the humanitarian [approach]. Look at someone like Bill Gates, he’s changing everything. Or even the recent proposals from Mark Zuckerberg and his wife. To me, that’s wealth well spent. It’s not even just for the extremely rich, but for everyone to think that way. Prada’s always tried to be as generous as possible in working with different charities but there’s always more we can do.”

Transit Blues is released on October 7 through Rise Records.