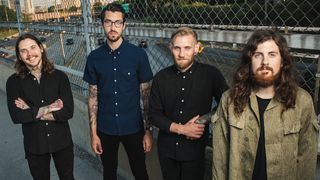 A geographical journey through frontman Mike Hranica’s imagination, The Devil Wears Prada’s sixth album Transit Blues references his love for great literature and his own short stories inspired by his wide reading. Conjuring images inspired by the passage of time and its effects both physically and mentally, Mike sheds light on his influences and development as the days tick by.

“This one moves quickly with its great upbeat chorus. Lyrically, this speaks of the degeneration of myself and it’s right at the beginning of the literary references across the album – this one references William Faulkner’s 1929 novel The Sound And The Fury. This was the first song we wrote because I’m really attracted to short songs – it makes you want more and it doesn’t give you too much to bore you.”

“This is based around the climax of Simone de Beauvoir’s 1954 novel The Mandarins. The main character is at the pinnacle of her life, she’s on the brink of suicide and looking at the dizzying whirlwind around her that’s become her life. She quite casually mentions it and it’s a real shedding of obligation – one so often has to love your family but she just sheds it away and I find that somewhat admirable.”

“This is by far our most upbeat ‘pop’ song. The last time we played Tokyo, me and our keyboardist Jon (Gering) were walking through Shibuya thoroughly drunk. Jon has a habit of making little joke songs so he started singing this chorus, we laughed and I said we’d record it someday. Fast forward a few years and we’ve actually made it into a song! There’s something nostalgic about it now – we’re a simple bunch.”

“I’m so nervous about this gun culture song because I was determined not to sound like we’re downplaying our military and the brave men and women that serve us. We’re a liberal lot coming from Chicago where gun violence and murder is unbelievably rampant, so this was inspired by a mass shooting. But there’s been so many that I can’t remember which one. I firmly stand behind this song’s message – common sense and background checks.”

“We wrote this one as an instrumental because the reception for our instrumental track Kansas from the album Dead Throne was incredible, but when we recorded it instrumentally it just sounded way too bare without vocals. Kansas lets me play guitar live, so I wanted to come up with another song like that. Now I can be very forceful about playing this one live just so I can play guitar.”

“I heard this title on the radio discussing old blues records, it sounded so poetic. I came up with this story of an old man living in downtown Detroit and one day his wife leaves him, so he’s waiting there to see if she’ll ever come back. His friends around him have died so he’s truly left on his own. This is one of my favourites. We have guest vocals from Stevis Harrison from The Chariot, it’s great to have him with us.”

“This was inspired Nayyirah Waheed’s short poetry book Salt. She describes something as “the condition” and I sprinted with that idea. The song looks at life and existence as a condition, a sickness, suggesting that nothing good comes of human existence. Part of what I wanted to do with this album was not be so forceful with singing, so I’m proud of being able to use clean vocals in a different way on this track.”

To The Key Of Evergreen

“I love the romance of a cross-country drive, the evergreen colours and the beauty and solace found in driving. I added in a lot of elements of Vladimir Nabokov’s novel Lolita, one of my favourite novels, because it’s so profound. It’s controversial given it’s based on a love affair between an older man and a younger girl, but the aching sorrow in their love is absolutely stunning and magical.”

“This song speaks of the idea of submersion, to find peace in drowning and to be floating away, to be desperate and separated but to still carry on. It’s conveyed here as the difference between what people want you to do but what you need to do to be happy in life. I see it as being happy but persisting in drowning. I was thinking of this total emotional rebellion, I saw the word ‘submersion’ and went from there.”

“On 8:18, the song Home For Grave spoke of a relationship that failed because the man dies and his wife never amounts to anything. It suggests how unfair life can be. This felt like the right time to continue the story when Anna finds out that Ian died. Vocally it’s a great contrast because it’s more spoken word and yelling, it closes with ‘move along, you’re next’, and that’s basically saying carry on, because you’ll die too.”

“This speaks to my daily anxiety and dealing with panic attacks and my mental and physical degradation with age in what can be a hectic lifestyle. It’s meant to tie up the loose ends and closes with a similar line to Praise Poison’s opening line – it bookmarks the whole album. It closes on the thought that ‘you can’t feel the transit blues without losing something you thought was true’. It’s a fitting end.”