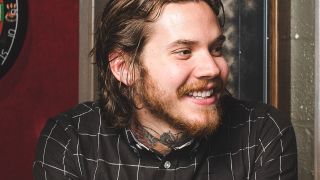 Mike Hranica, 26, is the frontman for Ohio quartet The Devil Wears Prada. His band recently released a new EP, titled ‘Space’ through Rise.

“I like to spend a lot of time by myself. I’ve kind of always been that way and I think it’s important for people to do well on their own, independently, but at the same time, friendship is inexplicable in some terms – like when I get off tour and some of the guys that I hold very dearly and some of the people I love more than anyone else in the world, my best friends that I get to tour with, when we get back together there’s that kind of warmth that can only come from friendship. Immediately I’m drawn to warmth.”

“Religion, in some aspects, feels very stubborn and ignorant. I’m very much a Christian, God-fearing man. But at the same time, I think a lot of values with religion are so often exercised or applied without subjective consideration, and I think that’s where ignorance can come into the picture and, honestly, a lot of hate and a lot of violence and war and people not caring for one another. Being a believer in God, I obviously believe that there are many wonderful things that come from faith.”

“Love? It’s misunderstood. I think a lot of people take love for granted and maybe need to spend a bit more time considering it. Every band has a song about it or about love lost. It’s a little too easy. I’d much prefer a different look at it, unless it’s executed really well, like Nick Cave.”

“With internet criticism, the first word that comes to mind is ‘meaningless’. I won’t put myself above it, but I don’t go through YouTube comments and I don’t go to Reddit, as a lot of people seem to these days. People will tell me ‘People are saying this on Reddit’ and I’ll be like ‘I just don’t care’. These people are meaningless. The unfortunate side effect of the internet is that people feel like they have this opinion that needs to be voiced, while classically and traditionally they have to earn that right. At the same time, free speech and being able to voice an opinion is a wonderful thing. But when people become so conceited in their own ideas, and because I think they have a means of expressing it so openly to the entire world, it blows things out of proportion as compared to what actually does have meaning or substance. Criticism is a wonderful thing in some forms, but in other forms, and especially in 2015, it can become very much meaningless.”

“I’m very opinionated when it comes to streaming music. When I was a kid, I’d make my money working at a Dairy Queen, and I would take my money and I would buy a CD at BestBuy. Every weekend I would go down to the mall that was about a half hour away and I would buy a CD and expand my collection. Fast-forward 10-12 years, I now buy everything on vinyl. I feel a very deep attachment to music when you have the physical aspect of it and I know a lot of people feel that way and it shouldn’t be lost. It should very much be revered and respected and valued. And that’s how I prefer to go about listening to music. A lot of that I feel is instantly negated by streaming, but at the same time, I definitely stream music by a new band, and then I’ll buy the record. So it’s got its place, but you can receive much more when you hold a piece of artwork in your hand and you have that attachment to it, and that’s something that’s very important to me. Heritage is completely ignored, or not factored into the picture, which is a shame, because those sentimental moments and emotions of going through your folks’ records is lost. I remember my dad’s CD changer – he had one of those ones that held 200 CDs and you typed in the number and it puts it in, kind of like a jukebox to some extent, and those are my earliest memories of music. It makes me think of growing up listening to R.E.M. and whatnot, and none of that happens with streaming.”

“I’ve never been too attached to the idea of extra-terrestrial life. What we’ve done with both EPs now, both *Zombie *and Space, they’re subjects that I realistically am not a huge fan or nerd of. When I have a less distinctive topic to talk about in these songs, I have more fictional liberty and I can make more up, which is something really entertaining and enjoyable for me. With that in mind, I’m not a huge alien dude. I’m not completely opinionated about these things and, long story short, I’ve never spent too much time thinking about it.”

“I believe that people landed on the moon. I guess I’m kind of conservative when it comes to a lot of conspiracy theories and a lot of modern myths. Andy [Trick, bassist] would be a better person to talk to about that because he likes to goof around with it and look into it, but I’ve never really considered it that much. A year of two ago, we were overseas doing a mainland European tour and I ran out of books to read, and my tour manager had this book about the moon landing called Space Race or something, about the race between the Russians and the Americans in developing a rocket programme and whatnot, so my understanding of the moon landing is very scientific. I’m not good with conspiracy theories!”

“Touring is hard work, and as I age I’ve had more issues health-wise. I feel very much like an old man and I’m not even 27 yet! A lot of that has come from touring. I have a really hard playing hot shows, doing summer tours. I have anxiety problems and I guess that kind of evolved from my depression when I was a kid. Now it’s just anxiety. But a lot of it comes from just being away and lacking the solidity of being on your couch or in your bed. At the same time, I’ve gotten to do so much from touring that I know a lot of people will never have the chance to do, and that’s something I’m entirely grateful for and I will always remain thankful for. And that’s a wonderful thing and that’s what keeps it going. I enjoy it, but it is work and it takes a physical toll.”

“As I get older, I feel I have to take more medication every year. That’s not to say I’m medicated-medicated, but that comes with ageing. I was in the emergency room on Sunday, just a few days ago, because I got this gastro-intestinal virus and I could not stop vomiting. And it makes you feel old. But I also have a method of abandonment as far as my youth and things that didn’t go my way – I just try to learn and forget, rather than mourn or regret too much. I just leave things on their own, and I think that’s part of my ageing, an unconscious method of coping that I have.”

“Nostalgia is something that becomes closer as I age as well. It only grows and expands due to memory and our ability to age and for new things to happen. It’s like this increasing index of nostalgia and memories and whatnot. But I remain very fearful of nostalgia.”