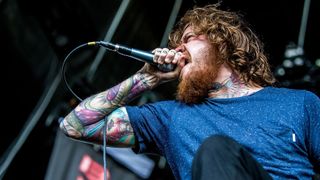 Ohio metalcore quintet The Devil Wears Prada are set to release their new album Transit Blues next week. As the band prepare to hit the road in support of their sixth full-length release, we asked vocalist Mike Hranica what was the first gig he ever attended…

“I must have been about 13 when I went to my first-ever show. I saw Incubus play at the Nationwide Arena in Columbus, Ohio.

“This would have been when they were touring after the release of Make Yourself and songs like Pardon Me were big hits. My dad loved that band, so he was all giddy and excited to see them play. I was definitely into it. I remember he took me and a neighbourhood friend of mine. We were all excited for this concert.

“I remember thinking how huge the Nationwide Arena was. While we weren’t in the nosebleed seats, we were pretty high up and away from the floor. It was still memorable for me, though. Did the experience make me want to be a vocalist there and then? It actually didn’t. I never really had aspirations to do that. I was planning on being a writer. I’d write stories and fantasised about creating something, but I also wanted to play hockey professionally too. But as much as music was part of my life when I was growing up and the fact that all my family were avid music listeners, no-one in my family played music. Nor could I sing or anything. The prospect of being on stage was romantic, but after seeing Incubus, it wasn’t like, ‘Oh, I belong onstage!’ or anything like that. I thought Incubus was cool at the time and that some of their songs were just total bangers. It was only later that I’d watch local bands each weekend. I’d get inspired by that and I ended up joining the band.”

The Devil Wears Prada launch To The Key Of Evergreen video