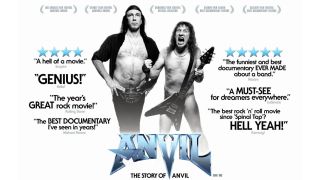 Netflix isn't just home to Breaking Bad, Stranger Things, Big Mouth, Bojack Horseman and hundreds more shows we've binged in a hungover stupor, it also includes some of the very best music documentaries. From Metallica's struggles making St Anger to the rollercoaster life of Keith Richards, there are many rock docs to lose yourself in.

Here are the ten best music documentaries on Netflix in the US.

Split into two parts this documentary covers the US rock institution's early years and 1994 reunion. Despite Don Felder and Don Henley claiming certain disagreements with Glenn Frey were downplayed, the film seems to pulls few punches as it reveals the often fraught relationships between the Eagles members.

Originally meant to oversee the recording of Metallica album number eight, the cameras kept rolling as James Hetfield went to rehab, arguments ensued and music's greatest supervillain Phil Towle did his best to piss everyone off. Essential viewing just to see Lars Ulrich screaming 'Fuck' into James' face without getting slapped.

Following the ups, downs and even bigger downs of Canadian metal band Anvil as they make one more push for glory, this is one of the finest rock documentaries ever made. You'll laugh and you may cry as the ever-positive Lips and Rob keep their horns high despite every KO punch that comes their way.

Understandably a highlight of this film is the footage of the guitar god enrapturing thousands from the stage, but with the voice of Bootsy Collins playing Jimi we also get a more personal side of Hendrix. Revealing sketches, recordings and even postcards sent to his father are presented to help paint a more intimate portrait.

Keith Richards: Under The Influence (2015)

The seemingly irrepressible guitarist who can't be killed by conventional means comes across exactly as you'd expect in this doc. Yes there are tales of drink, drugs and all things decadent, but underneath it are the musical anecdotes and passion that reveal Keef's continued devotion to the Stones and their legacy.

What do you do when a trio of metal-loving-kids who've just hit their teens go from playing on the street to opening for Metallica? Naturally, follow them with a camera. This brilliant film shines a light on relentlessly enthusiastic Brooklyn metallers Unlocking The Truth who stick two fingers up at the music business the only way they know how – by riffing out.

You probably don't know the names of the various mercenary musicians sharing the stage with the likes of Kiss, Bon Jovi, Pink and Billy Joel, but once you've seen their skills in Hired Gun there's a good chance you'll be a fan. An amazing film that shines the spotlight on the guys and girls who are largely remain unseen despite being onstage.

Celebrating the Canadian trio's unlikely journey from misfits to a global phenomenon. At a succinct 107 minutes Beyond The Lighted Scene belies the band's own mammoth creations, cramming in a full history as well as plenty of live footage and famous fans declaring their adulation of all things Rush.

Chronicling the history of Chicago from their 1967 beginnings in the Windy City through to the present, Now More Than Ever inevitably centres on mainstays Robert Lamm, Lee Loughnane and James Pankow but delves into the array of members who have come through the ranks to add their own flavours to the band's story.

Shot! The Psycho-Spiritual Mantra Of Rock (2016)

Going behind the lens of celebrated photographer Mick Rock, Shot! reveals the art of the music photographer and the stories behind the pictures. As well as showing Mick's relationships with the likes of David Bowie, Iggy Pop and Queen alongside his own rock n' roll lifestyle, this captures music from a different angle.