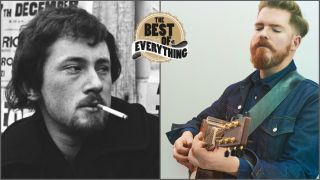 “His death really hit me hard,” says singer-songwriter John Smith of his friend and Pentangle legend John Renbourn. “He was so much more to me than someone I’d played with, and who had encouraged me. He was a friend as well, so I wanted to reference him on this album – that’s why I’ve dedicated it to his memory.”

The new album in question, Headlong, serves not as a showcase of Smith’s intensely-impressive, folk-inflected guitar work, but also of the inspiration Renbourn provided to Smith’s style and career. Emotionally-taut and packed with virtuoso picking and strumming, it’s little wonder Renbourn himself once previously dubbed Smith “the future of folk music”.

Below, we catch up with Smith for his list of the 10 John Renbourn/Pentangle tracks he hold dearest.

“This tune was my entrance into the big house of folk music. My dad gave me Bert & John on cassette in the summer of 1998 with a very clear instruction: Listen To This Album.

The first track is under a minute and a half long, yet somehow it sounds like a trip around the world, condensed and squeezed between two guitars. There’s so much going on, it’s so dense that all these years later I still marvel at what’s happening here.”

“Bert’s most famous piece of songwriting is a stark meditation on the white horse. He knew a few people who dabbled and this is his account. There is no flamboyant guitar playing here, instead it’s one of the moments he chose to showcase his writing and playing. Elsewhere on his debut album you can find some mind-bending trance guitar (I’m still figuring out how to play Smokey River). The Neil Young cover of Needle Of Death is worth a listen.”

“I love this song. It just sums up a very particular kind of sadness. Anne Briggs wrote this, and I learned the Bert & John version, but recently I heard this live band version. Terry Cox’s drums just roll and tumble all over it. Pentangle were a folk-jazz band. Folk-rock is too blunt a term to describe them. Terry worked his drums around and into the song, rather than having the song shout over him. It’s a very refined and subtle approach. He plays the kit like it’s an orchestra.”

“One of Jacqui McShee’s most beautiful vocals, I think. I admit I wasn’t always a fan of her singing. She can be so pure and plaintive that I somehow just let it pass me by. When I started to really pay attention to the subtlety in her delivery, this record in particular just opened up. Check out her phrasing here; she sounds like a fiddle. This song has a spectacular bowed bassline too (but we’ll talk about Danny Thompson later).”

Sarabande (by John Renbourn, from The Lady and The Unicorn, Transatlantic Records, 1970)

“John Renbourn is one of the greatest guitarists that ever lived. That’s a fact. One of the things I love about John is that he got really deeply into medieval and renaissance music – just totally obsessed. He didn’t care what people thought of it. This whole record is a trip into a strange and misty world. On this track, the Sarabande in B-minor from Bach’s 1st Violin Partita, he put his Gibson 335 through John Martyn’s Princeton Reverb, with the tremolo on six. It’s a monstrous tone, just crazily good.”

“What can be said about Danny Thompson in one paragraph? He and his beloved bass, Victoria, have carved a path through British music in the last 50 years that, surely, every double bass player since must have walked down at some point. He’s up there with Charles Mingus and Ray Brown as one of the true pioneers of the instrument (though he’d never admit it). His work with Pentangle is as fundamental to their sound as the playing of Bert and John.

He went on to work with John Martyn for a number of years, and this is one song in particular where Danny and Victoria make a little room to flex their muscles.

When I toured with Danny he put his big hand on my shoulder and said ‘You’re a nice boy. Don’t turn into a c*nt.’ I think it’s the best advice I’ve received.”

“The first time I saw John Renbourn play, at the Green Man Festival in 2006, he held a packed tent in the palm of his hand and veered wildly between renaissance and ragtime. Late in the set he pulled this out, the traditional song Lord Franklin. I believe he played it better than anyone in its near 200-year history. Months later I opened for John in Ullapool. He summoned me to his dressing room, poured me a drink and sat me down to tell me how great he thought I had played. His kindness to a young and fearful artist was staggering; it changed my life.”

House Carpenter (by Pentangle, from Basket Of Light, Transatlantic Records, 1969)

“My favourite version of this song is elsewhere (dig out Shine Eyed Mister Zen by Kelly Joe Phelps if you know what’s good for you). However! Pentangle recorded a duelling banjo and sitar. And it works! The wild lyricism of Bert and John, spoken by two of the most potentially disastrous string instruments known to man. They threaten to go over the top throughout, but somehow stay in the pocket for the whole five minutes.”

When I Get Home (by Pentangle, from Reflection, Transatlantic Records, 1971)

“Another song from Reflection, a record which was critically panned upon release, but it’s my favourite of theirs. This track in particular has a real J.J. Cale vibe. It’s a tough trick to pull off, but John plays lead all the way through the song and makes it sound vital. You can hear Bert’s rhythm part, super loose in the background, pulling at the drums the whole time. The whole thing has such a great feel.

It’s a beautiful, bittersweet Bert lyric, on drinking too much: ‘Once I caught the moonbeams, but now I have clipped my wings’.”

“It’s hard for me to imagine a better piece of guitar music than this. They take Charles Mingus’ deep, dark tune and transcribe it to DADGAD, where it becomes this perfect folk-blues meditation.

When they recorded this album, before Pentangle, they were playing together ten or twelve hours a day. They were completely obsessed with the guitar and its possibilities. It’s a powerful example for any musician.”

John Smith’s new album, Headlong, is available now. Catch him on tour at the dates below:

The bluffer’s guide to Folk Metal