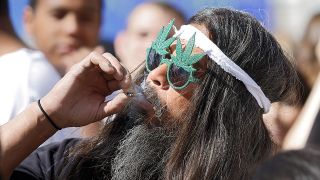 Few musicians are so synonymous with mixing the magic of massive riffs with a strong herbal remedy as Matt Pike. Whether peeling out gargantuan slabs of thick guitar majesty with the stoner rock godfathers Sleep or shaking your bong water with the modern day Motörhead vibes of High On Fire, Matt’s a man who understands that weed and metal are perfect bedfellows.

“It was a revolutionary thing for me,” he tells us. “I liked this music but it all started to really open up this whole new world when I was stoned.”

So we asked a genuine expert in both fields just what the best albums to get high to are.

“I gotta start by going back to Black Sabbath. I got fucking stoned and put on Into The Void, that was a real turning point in knowing what music I was going to like, what direction I was going to go in, and what music I’d play. Before that I’d heard AC/DC and Van Halen and ZZ Top, and those bands are all great, but I hadn’t heard anything as heavy as Tony Iommi and Geezer Butler. That was the heaviest shit out there, and when you first get stoned and listen to that it makes you understand that that music was made out of weed. Master Of Reality is the pure weed album, once you go past that you can add in a little coke or whatever, but that’s the real deal.”

“You know what was a really weird one? The first time I heard Metallica and I was stoned. There were these two brothers in my neighbourhood called the Flanagan Brothers, and they were the weed dealers – I was in elementary school and they were in junior high, so they were older. They were these crazy dudes with feathered hair, I’d go ‘round there and they’d get me stoned and play me music; one of them picked up Metallica’s Ride The Lightning and I just went ‘FUUUUUUUCCCCKKK!’ I thought it was bad with Black Sabbath, but now there’s this thrash metal and no one knows where it’s coming from! They’ve got a little bit of the British metal bands in there but it’s just so much faster, it felt like your head got stuck in a vortex. That was a moment that really changed me too.”

“Before that I was listening to punk: Circle Jerks, Dead Kennedys, Black Flag and all that shit. There was definitely a crossover with the metal shit, but I was living in Colorado and if I could get some green weed – like if someone got some Maui Wowie or some of that good shit that’s much more potent – then that music could really do a number on you. There were so many great records from that period, but I'd have to say, if I had to pick one quintessential hardcore weed record, it would definitely be My War by Black Flag.

“When I was a kid I bought the Celtic Frost tape Emperor’s Return, and that was one of the first super-extreme things that I could put on and get really freaked out by. It intensifies that paranoia when you’re smoking, if you know what I mean? That set me on a real path musically too, because after that it was soon followed by Slayer’s Hell Awaits, Exodus’ Bonded By Blood and Venom's Welcome To Hell.

“I went out one day and bought Misfits Legacy Of Brutality and it’s a weird one, because it’s got to be the worst recording in the world... but if it wasn’t then it wouldn’t have so much power to it. It was another record that would spin my head when I was getting high, because you have this guy singing like he’s in the 50s and then a really scratchy riff from this three-chord punk band going on over the top of it. A very disorientating sound; this 1950s surf rock crooner and this crazy goth-punk music. Very original, too.”

Pink Floyd – Dark Side Of The Moon

“When Sleep started we essentially wanted to take the heaviness of Black Sabbath, some of the drone of dub music and mix it with the experimental/psychedelic side of stuff like Jimi Hendrix and Pink Floyd. I am a huge fan of Pink Floyd’s early material and they have really opened my mind up at times, I really love Meddle and Animals, but who can deny a song like Shine On You Crazy Diamond? I love The Wall too but I would really plump for the earlier stuff, I like Nick Mason and I really love Dave Gilmour, there really isn’t another guitar player like that around. He’s one of the greatest ever, up there with Iommi.”

“If I was to sit down today and light up, what would be the first album that I would reach for? Well, obviously, a lot depends on the mood you’re currently in, but I'd probably want to go for something like Celtic Frost. There’s a band called Crimson Relic who I really love, and they’re basically Frost worshippers just like me. High On Fire is just basically me paying homage to Celtic Frost in any way that I can; if you love something that much you just take things from that toolbox. And those guys really use the tools in an awesome way.”

High On Fire's new album Electric Messiah is released October 5. Pre-order it now from Amazon or from HMV.