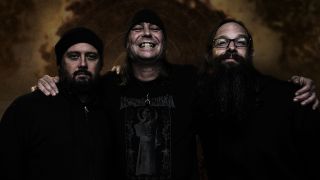 Oakloand sludgelords High On Fire are headlining London's Desertfest on May 7, doling out brain-ripping guitars with a punked-up attitude to a horde of greenfingered metalheads. But with seven albums in their riffy repertoire, where do you start with HOF? Well, we asked drummer Des Kensel to pick his 20 all-time favourites (as it's the band's 20th anniversary), and he did not disappoint!

"At the time we were so psyched on this song – we thought the end part was the heaviest thing ever! I can remember after the recording, we listened to the end part while drinking beer and watching Bruce Lee eat a barbecued cat in Fist Of Fury over and over – we would just rewind the part where he aggressively takes a bite out of the cat! Also, I really like the drum part. It's sort of my first heavy tom beat with ride bell in High On Fire."

"Our first  – and probably only – song that all the chicks were in to. A friend of ours said she used to play it when she danced at the strip club."

"I really felt that we had some song-writing capabilities after this one. It’s got hooks, heaviness and emotion. It kinda gave me a Sabbath Volume 4 vibe, too."

"A crowd-favourite at the time. It's also the first High On Fire song where one of my guitar riffs was used."

"I like the drums – it's very busy and physically challenging."

"This song was my first time ever of overdubbing drums. I did 4-5 tracks of drums all on top of each other, which was fun to do – it added a cool effect and sounds heavy as fuck!"

"Matt and I spent many drunken nights down at the studio till 4am finishing writing (2005 album) Blessed Black Wings. I can remember riding my bike home through Oakland hammered! I even thought to myself that I’m too wasted to ride. Anyway, this song was one of my favourites from writing because it’s heavy yet kind of emotional. I remember Matt doing the end on an acoustic and I forced him to play it in power chords. He reluctantly did at first, but when he eventually got it down it sounded awesome!"

"I was fuckin' psyched to finally play a song with a fast beat!"

Death Is This Communion

"The chorus part is so heavy, and has an awesome hook!"

"So simple yet catchy, and has pure, raw energy!"

"I love the intro riff and drum fills."

"The first song were I did 'fast' double-bass. It’s not Lombardo fast, but it was fast for me at the time. Also the song title was inspired by my son Devin and my growing up in the north-east."

"The drum intro was inspired by all the Fife and Drum Corps parades I used to go to as a kid. Every July there was a Fife and Drum 'Muster', and I always looked forward to it. Lots of loud drums and the officers of the drum corps would shoot muskets, rifles and cannons. What’s not to love about that as a kid! Anyway, I thought it was a cool intro until someone pointed out to me it sounded exactly like the drum intro to Ozzy’s Little Dolls! I guess subconsciously it was inspired by my hours of listening to Diary Of A Madman as a kid."

"This song is so heavy and epic! I just love the way this one came out – very complex songwriting with lots of layers to it. Some of the key changes are so good!"

"It sounds so rabid and aggressive!"

"I just like the way this one moves. It’s heavy yet groovy."

"It's just fast and aggressive – no bullshit!"

"Finally close to that 200bpm mark! I love the speed and ferocity of this one."

High On Fire headline Desertfest in London on May 7.