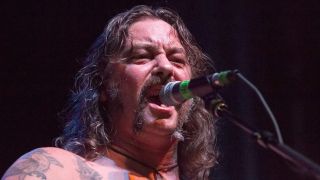 “It was actually super hard to put that list together,” Sleep and High On Fire guitarist Matt Pike says. “During my career, I don’t feel like I’ve ever made a shitty song,” he continues. “I’m very particular about what I release to the public, so it’s kinda like being asked to pick your favourite child, y’know?”

So how did the perpetually shirt-adverse guitarist settle on his top 10? “Basically, I just picked the tracks that I’d put on if I turned on each one of my albums – what I’d put in a set-list right now. It was really hard to pick 10… I stated with, like, 70 of ‘em!

“I picked a lot, too,” he adds, “where it was not so much that I thought my own performance on that track was particularly good, but also tracks where I could really hear my band evolving an getting better at what we do – Blessed Black Wings is the perfect example of that. And, dude, the song Sons Of Thunder, the instrumental, that’s my favourite song off of that album, that song is the fucking bomb! We were opening the set with that one for a while, too…

“Shit! I should’ve put that one in the list!”

Too late now, Matt. So, dig out the skull bong and enjoy.

“That song kind of made Sleep what it was, that was our signature thing; that’s us ripping off Black Sabbath with taste! I literally took Lord Of This World, changed the scales and the tone around a bit – and dude, the way Al [Cisneros, Sleep bassist] plays bass around the riff, it just all works so well. And that was the moment when Sleep knew we were Sleep and not Asbestos Death or ‘punk Sleep’. Plus it was the moment they finally let me solo! I’d pent that shit up for a long time; I was, like, dudes, you got to let me solo! If I’m in a band and I can’t solo, I’m going to tell you to fuck off!”

“This was the first album after I picked up Jeff Matz [bass] – I loved playing with George [Rice] and I loved playing with Joe [Preston], don’t get me wrong, but Jeff was the refreshing thing that I needed; I needed another person that I could co-write with, who I trusted to co-write, and when me Jeff and Des [Kensel, Drums] got together it felt like something special – Jeff really gets the spirit of the whole thing, he gets my style. Eleven years later he’s still my man, and this was one of the first songs that we wrote together – hands down it’s still one of the baddest we’ve written too!”

Ethereal (High On Fire – Death Is This Communion)

“This is the song where I really learned I could sing, and where I learned I could play melodic guitar solos. And this is also me finding my own spiritual path and not just walking among – and I hate this term – the ‘sheeple’, y’know? I don’t know if it’s all the acid I took or just the way I was born, but I’ve always felt uncomfortable with the idea of sin, and apologising for just being alive. I realised that religion and spirituality are way different things, and this song is kind of about that, that’s why it’s so important to me.”

Baghdad (High On Fire – The Art of Self Defense)

“The weird thing about Baghdad is that before the twin towers came down, and all that shit, I had this really prophetic dream about Baghdad – the ancient city of Ur. I felt this weird struggle inside of me, I’d had this weird dream about Baghdad, so I named the song that. And then sure enough the towers came down very shortly after I had recorded it. It’s also about coming straight out of Sleep, fighting with my dogma and keeping my sword up, choosing the path of defence, rather than letting others make my mind up for me… And I don’t want to get into the ancient aliens shit!”

“Y’know why I like this one? Because it’s about me, as a kid, realising who I was before I was even in a band. I was doing a lot of acid, I was talking to spirits, I was talking to aliens and demons; it’s about when I was a little kid and I used to get these visions in my head of me playing in front of huge crowds. I’ve not talked a lot about this in the press, but I used to get a lot of these prophetic dreams. But it’s also some reminiscing on ditching school and taking acid a lot, skateboarding downtown – basically being a stoner, y’know? iIt’s essentially about that important turning point in my life.”

From Beyond (Sleep – Holy Mountain)

“What I love about this one is it all comes from Al’s genius. Al plays chess, he’s very pattern-orientated in his head and you can hear from the timing in that song; he likes to start things on a five count, rather than a four, and the timing in that song is just extraordinary – when Al really first showed me his unique sense of timing is when we wrote that song. I mean, we’d been playing together for a while by then, but that was when I really started figuring out his genius – the way that guys thinks is just way, way outside the box. It’s also one of the most soulful songs that Sleep has.”

“Dopesmoker is probably the hardest thing I’ve ever done in my life. But one of the magic things with Sleep is the patience involved, the way the riffs come to life. With Dopesmoker I play for two to three minutes at the beginning of it and you don’t know what it is until it all kicks in, and then it makes sense. It’s not simple, but when people get it, it’s fucking magic! And, y’know, I never would’ve been able to figure a thing like Dopesmoker out unless I had magic people in my life like Al. That dude is my brother, he’s a musical soulmate. It’s shit like that that makes is so special.”

“This is one of the first songs we wrote where I got to experiment a bit more; it’s in a different key to what we’d been writing in. But it was also really mine and Al’s indulgence in our infatuation with fantasy and comic books, too. And it was way collaborative – the dynamics of that song have always been a little amazing to me. I really love this song, and live, we can really manipulate it and do the weirdest shit to it – fast, slow, and no one notices! It’s another really magical song, one of my favourite that Sleep ever wrote.”

Blood From Zion (High On Fire – The Art of Self Defense)

“This is my Christian nihilist song! That was the first song we ever wrote, so it’s probably the most important High On Fire song, as well as being the first time I sang and played at the same time. Actually, that riff was going to be a Sleep riff, but those dudes fucking quit on me so I was like, okay, I’m taking this to the next level, I’m going to speed this shit up. It was my first experiment in speeding up doom – putting a thrash/hardcore drummer to a doom sequence, and that’s what makes that song amazing; this was High On Fire’s Dragonaut.”

“This one is just the most well-rounded, best ending song of all time – my guitar playing, my lyrics, everything just fucking clicks. It’s all just showing off, but it works perfectly. It’s my baby, but it’s also Jeff’s baby and Des’s baby too, and every night when we play it, it’s just the sound of fucking victory! It’s the fucking glory song. Seriously, if you’re a band playing after us, and we play Snakes…, good fucking luck dude, because it sucks for you, it sucks for every fucking band.”

High On Fire Tour the US and Europe later in 2016 with Meshuggah, dates below:

Matt Pike: An Artist Without Rules