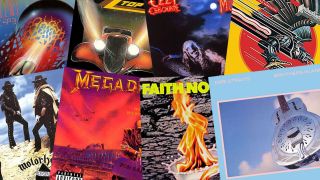 When looking back over rock's rich heritage, it's fair to say the 80s were dominated by sounds which truly were rock hard. From the advent of Black Sabbath 2.0 in 1980, right through to the MTV generation and glam metal's last gasp in 1989, heavy metal laid down the template for much of what made the 80s one of rock music's greatest ever decades.

But there was plenty more going on beyond those heavy metal scenes. The punk sounds which had dominated the late 70s were turned on their head by a generation hungry for experimentation, who morphed the template into their own electric post-punk movement. Then as the 80s drew to a close and grunge's chart-toppling power loomed on the horizon, rock with a twist took hold: Nirvana arrived and The Pixies tightened their grip. From balls to the wall metal to dark, sexy alt-rock; from Aerosmith to the Replacements, the 80s was the decade when there really was an alternative to whatever was going on in the mainstream.

But when it came to picking the decade's finest albums, we decided we needed a little help. So, we turned to Louder readers to hear what they thought. We opened a poll and asked our readers to vote for the albums they loved. And vote they did – we got just shy of 35,000 of the things – with some obvious choices, and some not so obvious choices, making the final cut.

Here, the 50 best albums of the 80s, as decided by Louder readers.

Many people thought that Pink Floyd would be unable to survive without their erstwhile visionary Roger Waters. Indeed, Waters was so against the idea of the band carrying on without him that he tried to sue his former bandmates to stop them from doing so. Cue a vicious war of words, and the aptly titled A Momentary Lapse Of Reason album.

The doubters needn't have worried, as David Gilmour stepped into the breach and delivered a record that lived up to the Floyd name, what with its atmospheric instrumentals, twisted lyricism and sparse arrangements. It also re-established Pink Floyd as one of the world’s leading rock groups without Waters, a fact which only prolonged the bitterness between him and his former bandmates. But, as drummer and co-founder Nick Mason put it so memorably: “Roger was fond of saying that no one is indispensable… and he was right!”

In late 1989, Rush, moving from Mercury to Atlantic, decided to ease off on their “computers and synths period”, reverting to rock. The result was a real return to form for the progressive trio from Canada. Produced by Rupert Hine, it boasts echoing drum sonics and a glistening sheen. The Trevor Horn-like rhythms of Scars could almost be ABC or Frankie Goes To Hollywood. This is not a bad thing – in fact the marriage of clean, concise arrangements and Rush’s innate, shrill, histrionic edge often punches above its weight.

The trio wrote some powerful hooks and choruses, with tracks like Chain Lightning and The Pass excelling as a breed of accidental power-pop. War Paint, with its rousing, anthemic refrain of ‘boys and girls together/paint the mirror black’ is like a trashy gothic Sweet – a tighter, tougher sound that sacrifices none of the group’s trademark technical wizardry. Hard-rocking opener Show Don't Tell is a highlight and features a stellar vocal performance from Geddy Lee. A better Rush album than most Rush fans realise.

Although Heart’s second line-up had cut their teeth on 1983’s Passionworks, follow-up Heart feels like a debut. Discovering that not all record labels had written off the band, they signed with Capitol and underwent a total reinvention.

Outside songwriters such as Martin Page, Bernie Taupin and Holly Knight were brought in. To say it was a success would be a massive understatement; the album yielded no less than four hit singles, with What About Love?, Never and These Dreams being the pick of a very high-quality crop. The album marked a turning point in the band's career, but also a dark point, as what Nancy Wilson calls "the whole drug haze of the eighties" began to take hold.

Springsteen’s seventh studio album generated as many singles, Dancing In The Dark, Cover Me and I’m On Fire among them. But for all the album’s overall quality, the deceptively uplifting title track’s tale of a shafted Vietnam veteran is the one that most people recognise.

Born In The USA had come along right on the heels of a dark period in both Springsteen’s own life and for Americans in general. Springsteen, who was susceptible to his own depressions, had for his part sunk into an existential crisis following the tour to promote his fifth album, The River. He articulated as much on his next record, 1982’s Nebraska, a stark, solemn collection of songs that sounded like whispered moans in the dead of night.

The ordinary Joe characters with which Springsteen populated Born In The USA were often as not fighting the same internal and external battles as on its predecessor, but musically this was an altogether different and more welcoming beast. Filtered through the returning E Street Band, Born In The USA was instead rousing, uplifting, as slick and sleek-sounding as a sports car, and balm to tend the battered psyches of millions of Americans.

Despite the grim subject matter of some of its songs, Born In The USA made Springsteen arguably the biggest musical star of 1984.

For many, Van Halen just wasn’t Van Halen without Diamond Dave. Eddie saw it differently. “We lost a frontman,” he said, “but we gained a singer.” And with Sammy Hagar on board, the band’s career arc continued upwards. 5150, the first ‘Van Hagar’ album, was also the band’s first US number one.

The band upped the keyboard and power ballad quota on this record – and immediately hit the jackpot. With 5150 they laid down a blueprint that would serve them better in commercial terms than ever before. With trusted producer Ted Templeman defecting to the Roth camp, VH enlisted Foreigner’s Mick Jones to put a fine gloss on the album’s three keyboard-driven hit singles, Why Can’t This Be Love, Dreams and Love Walks In.

This is an almost perfect summer rock album, and a sheer joy to listen to, even if fans of Roth would never really take to Sammy Hagar as the new (infinitely better and more successful) singer.

The Miracle was the first Queen album to be made in the shadow of Freddie Mercury’s secret fight against AIDS, and came after a three-year hiatus the group took following the band’s legendary 1986 tour. It was originally going to be called The Invisible Men, which would have hardly been appropriate for one of the biggest bands in the world.

The mix of styles ranged from the progressive title track to the pomp pop flow of I Want It All and the electro funk of The Invisible Man (which namechecked all four members in the lyrics). Scandal was especially noteworthy, being written by May as an attack of the UK media, who’d hounded him over his developing relationship with Anita Dobson, and also for the way they treated Freddie Mercury as he battled AIDS.

Although swathed in synth sounds, the album is triumphant thanks to Mercury’s stunning vocals and May’s agitated guitar work. As a studio-only record it showcases the marvellous versatility of the four-piece, and its stand-out tracks could quite easily have come from any Queen album. The balance between all the styles worked out better than many might have feared.

It’s easy to understand why this was the album that made Priest stars in America. The British legends’ second creative peak arrived in the mid ‘80s, and Defenders Of The Faith was the result.

Although lacking the chart hits of Screaming For Vengeance from two years earlier, its songs were robust and stirringly performed. Guitarists Glenn Tipton and KK Downing caused sparks from the off, while Rob Halford’s vocal performance is at times frighteningly good – check out his locomotive-fast turn of phrase that begins with “Look before you leap...” in Freewheel Burning.

There's real substance and power to the likes of The Sentinel, and an endearing frisson of censor-baiting sexuality to the menacing Eat Me Alive. Jawbreaker and Eat Me Alive were icing on the cake. All killer, no filler.

Hot on the heels of 1980’s Departure came another all-time American classic. The greatest AOR album of all time, Journey’s first US No.1 made them stadium-filling superstars.

It’s impossible to resist such lachrymose blockbusters as Don’t Stop Believin’, Stone In Love, Who’s Crying Now and Open Arms. Journey, who also released their live album, Captured, in ’81, were completely untouchable at this point in their career.

Pivotal to this album's success was their new keyboard player: Jonathan Cain co-wrote every song on Escape. “What changed about Journey,” Cain said, “is that I started writing about the people that cared about the band.” Don’t Stop Believin’, an evocative tale of ‘streetlight people, living just to find emotion’, became an American classic. Open Arms – rejected by his previous band The Babys – was a monster hit.

By the time Bon Jovi had put together New Jersey, the band had mastered hard pop-cum-rock. Released in 1988, the album caught the band at a point when they had the world at their feet – so willing to eschew cool and so prolific with a killer pop chorus that they strode across the charts like a bouffant-haired colossus, and with the grunge party-extinguisher three years away, they ruled the roost.

The follow-up to their huger than huge 1986 album Slippery When Wet, New Jersey sees Bon Jovi following in Bruce Springsteen’s footsteps artistically. It’s a high-water mark for epic, anthemic pop-rock, with big-chorus belters such as Bad Medicine and Lay Your Hands On Me.

If, as guitarist Rudolf Schenker once told Classic Rock, the Scorpions taught the aforementioned Bon Jovi everything they know, Love At First Sting was a priceless lesson in potty training.

Love At First Sting is packed with high-quality songs that struck a chord with the US market but retained their European roots, and the party metal of Bad Boys Running Wild, fan tribute Coming Home and the heartfelt ballad Still Loving You proved to be winners not only on record but on stage as well. An album that scarcely puts a foot wrong.