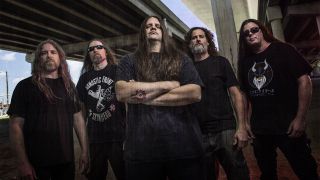 Even if you’re not a death metal fan, you know the name Cannibal Corpse – they appeared in Ace Ventura for crying out loud! And they have just released their 14th studio album Red Before Black, which is a disgustingly heavy slab of gore-laden depravity… which is exactly what we wanted, to be honest.

Cannibal Corpse have become synonymous with grotesque, horror movie imagery in their lyrics, telling many a tale of bloodshed and murder. But which songs really push the envelope of taste and decency? Well, we thought it was time to find out!

Entrails Ripped From A Virgin’s Cunt (Tomb Of The Mutilated, 1992)

Arguably the most offensive song in the Cannibal Corpse canon, this lively number from their third album doesn’t really require any further explanation. The phrase ‘mutilated with a machete’ is one of the more upbeat, uplifting moments.

One for the DIY fans out there, this vicious tale of unsolicited surgery is worth avoiding if you’ve got a sore throat. ‘Sawing the neck I am engulfed in fantasy!’ shrieks Corpsegrinder, before adding: ‘Chew the oesophagus, cannibal delicacy!’ Jesus.

‘Dangling above a vat of putrid muck…’ No, it’s not Noel Edmonds’ gunge tank (ask your parents), it’s your impending death, in a giant cauldron full of hissing, bubbling man-matter. That explains the ‘rancid stench of foul decay’, at least.

You can read the full story of Cannibal Corpse’s new album in the latest issue of Metal Hammer – on sale now. Buy it directly here or become a TeamRock+ member to read it right now.

Cannibal Corpse: how one band took extreme metal to the mainstream

This is what Cannibal Corpse would sound like on Radio Disney