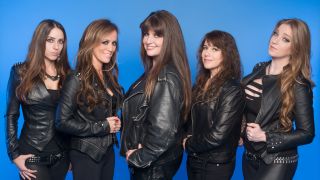 “It’s so difficult to pick 10 Iron Maiden songs, which is why a had to pick 12!” explains The Iron Maidens drummer Linda McDonald – aka Nikki McBurrain – whose passion and enthusiasm for the band radiates crystal clear down the transatlantic phone line. “I could have gone on and on, but I guess we have to cut it down!”

In truth, of course, they’re all favourites. When TeamRock makes a passing reference to 1992 deep cut Judas Be My Guide, she says: “That almost made the list, but we haven’t played it in so long! That is such a great song. It’s got a great guitar solo. It’s very melodic and I love it!“

THE TROOPER (Piece Of Mind, 1983)
Linda: ”That one is a standard. Even if there’s a language barrier, where English isn’t the first language, everybody knows the words. I don’t know if they know what it means or not, but it’s very powerful and uniting. We’ve had [Motörhead guitarist] Phil Campbell join us onstage a couple of times for that one, and Alex Skolnick. The crowd go nuts every time we play it, no matter where we are.”

RIME OF THE ANCIENT MARINER (Powerslave, 1984)
“Sometimes, some of the other girls in the band think this one’s too long to play, but it’s one of my favourites because it is such an epic song. It’s really fun for me, especially after that break with the speaking part, when the bass kicks in with the hi-hats, the crowd just loves that. There was one particular show where I really had to use the bathroom, and during that break I ran backstage, went to the bathroom and came back right as it was time to cue up with Wanda on bass!”

CHILDREN OF THE DAMNED (The Number Of The Beast, 1982)
“To me the era that got me interested in Iron Maiden was the first three albums, and this just reminds me of that era. It’s such an early classic, very powerful, people get very emotional when the start of that song kicks in, they’ve got their fists in the air! It just goes over really well live.”

PHANTOM OF THE OPERA (Iron Maiden, 1980)
“With live playing it’s all about the energy, and this one just has so much energy, and so many breaks; again, the audience just love hearing all these early classic ones. And you know, sometimes maybe they don’t think that girls, for whatever reason, might be able to play something that’s a little more non-traditionally arranged and whatnot, so it’s nice to be able to pull it out and watch them eat it up!”

REVELATIONS (Piece Of Mind, 1983)
“There is such a roller-coaster of emotions in this song. It’s up, it’s down, it’s very beautiful but very strong, it’s got harmonies – it’s got everything! It’s not really a ‘slow song’, but we’re not doing any ballads or anything, and with this one you slow it down a notch before you pick it up again. People love the interaction with our bass player Wanda in the verses, when they throw their fists in the air at the point that Steve Harris always does. We emulate everything!”

HALLOWED BE THY NAME (The Number Of The Beast, 1982)
“This is one we have tried to leave off the set, sometimes, and the audience just won’t accept that, haha! When we’re done, they want us to come back and play it. It’s one of the most anticipated songs, so we kind of have to do it! And the strange thing is, as Bruce always says, ‘you don’t mosh to Maiden’. This is the song they want to mosh to!”

GENGHIS KHAN (Killers, 1981)
“As a drummer, how could you not want to play Genghis Khan? People just drop their jaws when we play it. Coming from the drummer’s perspective, to me Clive Burr is a huge influence and one of the reasons I wanted to start playing, and this is one tune that made me say: ‘I have to learn how to play like that!’ With that kind of explosive energy. And eventually, down the line, I did!”

THE CLAIRVOYANT (Seventh Son Of A Seventh Son, 1988)
“This one’s got a real nice, different mood to it. We try to balance it out, but there’s just so many great songs to choose from! It changes the direction of the set, and we do want to include more eras than just the early days up to Live After Death. Whenever we finish a song and Wanda starts that amazing bass line, everybody knows what it is and a lot of times you hear a gasp from the audience. And it sounds OK without a keyboard!”

PURGATORY (Killers, 1981)
“Again it has to do with Clive Burr’s energy, and this really shows off the punk-ish influence on early early Maiden. Some may not be aware now that their roots came from a lot of that early punk era. It’s a great one to throw in because anyone who’s into the lesser-played early tracks really appreciate it.”

THE PRISONER (The Number Of The Beast, 1982)
“What’s not to like about The Prisoner!? We start with the sample of the voice, it kicks in with that very simple but super-powerful drum intro and takes off from there. There’s a really melodic harmonised chorus, and I get to do a lot of the back-up vocals. I know that neither Nicko or Clive ever sang back-up vocals, but I get to in this tribute band, and it’s just a lot of fun!”

ALEXANDER THE GREAT (Somewhere In Time, 1986)
“Yes! Alexander The Great is another great absolutely epic Maiden song. Because it was never performed live by Maiden themselves, and a lot of people were constantly requesting us to play it, we just thought ‘Why not?’ It’s got that brilliant mid-section, where the solos, the harmonies and the rhythm section gets everybody jumping in time, we see this wave of people in the crowd. We performed this in Mexico City when Steve Harris and Bruce Dickinson were in the crowd, so it was just a little bit nerve-wracking! But awesome.”

SEVENTH SON OF A SEVENTH SON (Seventh Son Of A Seventh Son, 1988)
“It’s fantastic, but we’ve only played it once, because with this song we really absolutely must have keyboards. And we actually had Michael Kenney – Iron Maiden’s keyboardist – sit in with us for this one, and we put so much time into learning it because we only had one shot. It was absolutely amazing. Maybe one day we’ll play it again, but I don’t think we can borrow Michael Kenney every time we want to play it live; hat might be frowned upon by Iron Maiden!”

What's it like to be the female Bruce Dickinson?