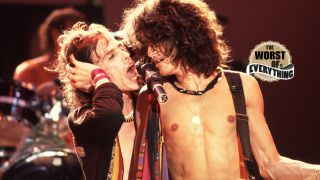 Aerosmith’s recorded history feels like two bands. Pre- and post- drug addiction. Or pre- and post- MTV if you prefer. One is a freewheeling kaleidoscope of attitude, styles and sounds. The other is a much slicker machine producing songs for maximum commercial impact. Guess where Aerosmith’s real turkeys are roosting…

If the secret of a hit song is “don’t bore us, get to the chorus”, then this track from 1993’s Get A Grip album get things well and truly back to front. The verses aren’t stellar, but they can pass muster. The song’s chorus, however, is so tossed off that it’s amazing the band could ever have felt strongly enough to release it as a single.

The commercial blueprint Aerosmith adopted in the mid-‘80s to reverse their flagging fortunes fixated on parping horns and vocalist Steven Tyler’s lascivious yet tongue-in-cheek lyrics. It worked well enough, of course, but by the time this tune appeared on 1997’s Nine Lives the trick was wearing horribly thin. This is nothing but a pale re-tread of far better tunes like Rag Doll.

Written by Tyler and guitarist Joe Perry with Damn Yankees’ Jack Blades and Tommy Shaw for Get A Grip, this is all style and no substance. Tyler tries to sing with that fantastic drawl of his that so appealed on early tracks like Spaced. But this sounds like a weak pastiche weighed down by a production that cares more about a sound than a song.

Oh dear. Taken from Just Push Play, this is presumably the sound of Aerosmith trying to be contemporary, featuring as it does some ill-advised scratching and any number of laboured studio tricks. The chorus is horribly tossed off, and even if vocalist Steven Tyler can lay claim to have been the first rock singer to dabble in rap, his performance here sounds embarrassingly out of time.

Tyler tries hard to pump some life into this perfunctory pop rocker from Get A Grip, but if feels like a really bad fit. The song is simply too vacuous to be worthy of a big, loud rock band like Aerosmith. Lenny Kravitz gets a writing credit on this one and even features on the tune. Was he responsible for the tired “don’t get funked up” line?

The trite response to this song from Music From Another Dimension is “Oh no!” This utterly perfunctory r’n’b tune is a solo composition from Perry that feels like a “shit, we need another song for the album” moment. You can’t tell me that anyone can listen to this next to, say, Toys In The Attic and believe it has any place in the Aerosmith repertoire.

If you’re going to let the average voice of Joe Perry loose on an Aerosmith song and relegate Tyler to the bench, then that tune had better be an absolute rip-snorter. This track from Music From Another Dimension really isn’t one. And those “whoah whoah whoah oh” bits are simply woe, woe woeful.

We all know that songwriter Diane Warren has an impressive track record of crafting hugely successful tear-jerking ballads. It doesn’t mean her song from Music From Another Dimension is any cop, though. This feels like a facsimile of real feeling, full of endless platitudes and nonsense. “I will lift you high above the rain” indeed! Aerosmith have recorded some great ballads. This isn’t one of them.

This sounds like Aerosmith went for a curry, listened to the music playing in the background, and felt themselves ‘inspired’. It’s a terribly ham-fisted attempt from Nine Lives to conjure up the vibe of the country, with lashing of dulcimers and strings making the whole thing utterly cringe-inducing. Lyrics including ‘She a friend of mine/She a concubine/The sweetest wine/I gotta make her mine’ only add to the embarrassment.

Aerosmith have always sounded most affecting when they’ve been recorded organically. Just Press Play, produced by Tyler, Perry, Mark Hudson and Marti Frederiksen, is the polar opposite of organic, drowning tunes in gadgetry and studio slickness. This is the most obvious example of a finished tune that feels like its entire soul’s been hollowed out.