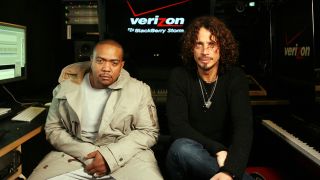 When Bob Dylan dared to pick up an electric guitar, he was branded a traitor by some of the more over-zealous purists in his audience. But aren’t our idols supposed to do the unexpected?

The Beatles made the phenomenal transition from mop-topped, besuited beat combo live act to psychedelic, mustachioed studio experimentalists. Few would have predicted Coldplay’s incremental evolution from Yellow (well, beige actually) to day-glo. In both examples, you can clearly trace the journey through their recorded output – what screenwriters might call a distinct ‘character arc’.

But what about those acts who made a sharp U-turn, faster than a politician sniffing out a photo op? Those abrupt changes in artistic direction that no-one could possibly have anticipated. David Bowie forged an entire career out of WTF moments, constantly changing his sound and image at the height of its popularity – much to the irritation of his record label’s PR department, apparently, who were forever having to reassess how to market him.

We take a look at some of the biggest musical curveballs over the years, from Arctic Monkeys’ lunar exploration to Metallica’s bizarre collaboration with Lou Reed.

10. From goth punk to yacht rock

Cali goth-punks AFI built a following on fast, doom-laden hardcore punk. Over the years, their styling and lyrical imagery have maintained dark, gothic overtones while the music itself has gone through a range of stylistic shifts. But when it was announced in 2017 that frontman Davey Havok was joining three members of No Doubt in an 80s-flavoured pop supergroup, many surely checked their calendars that the date wasn’t April 1st. But fooled we were on the release of Dreamcar, which proudly showcased 12 slices of unadulterated, glossy yacht rock, inspired by the likes of Erasure et al. It shouldn’t work, yet somehow it does.

Snoop Dogg surprised a few people when he reimagined himself as Snoop Lion and released the reggae album Reincarnated after a trip to Jamaica. But nothing brings greater joy to the heart than his ongoing love-in with fellow stoner Willie Nelson. At first, you couldn’t think of two more unlikely characters forming a bond, but really they were a perfect fit: two chilled-out entertainers coming together to celebrate God’s gift to mankind. The biggest curveball is the bluesy singing voice that Nelson coaxes out of Snoop on Superman.

Beck is known for his curveballs, typically producing at least three about-turns before reaching the bridge. But even the master of reinvention surprised many when he went from a swaggering country hip-hop maximalist to a stripped-back troubadour on the appropriately-titled Sea Change. Released in 2002, it was the album that polarised both fans and critics.

No longer propped up by bravado, caricature and endless samples, the comparatively skeletal production left him with nothing to hide behind except the quality of the songs. For some it was too earnest, in one stroke shedding all the mystique that he had spent years cultivating. For others, it simply added to his enigmatic persona.

Serial collaborator Jack White is no stranger to inspired partnerships. His somewhat unexpected pairing with Alicia Keys for Another Way to Die is to this day the only Bond theme ever to be performed as a duet.

But this isn’t his strangest partnership to date. After a chance meeting with Insane Clown Posse at an airport, White suggested a hook-up with his fellow Detroit oddballs. The result was Lech Mich Im Arsch. You don’t need to be fluent in German to translate that title, but if in doubt Google will do it for you.

Perhaps even more bizarrely, the profane title itself was actually the product of 18th century classical composer Mozart, a piece taken from his ‘scatological canon’. And yes, it’s actually a thing – check it out.

In 2002, Paul Cattermole left teen pop sensation S Club 7 at the height of their popularity. Why? So that he could start a nu metal band with his old school mates, inspired by Limp Bizkit and Rage Against the Machine of course!

The result was Skua. Alas, it would be an agonising 12-year wait for fans until their debut album finally dropped. If you’re unconvinced by Paul’s metal chops then 2014’s Kneel might be something of a surprise. It’s actually a lot more palatable than you might suppose, albeit more Hoobastank than RATM and about 15 years too late.

Unfortunately, with Paul regrouping for a leaner, meaner S Club 3, a second album from Skua is yet to materialise. And, if you’re curious enough to check them out on Spotify, it would seem that the 2019 melodic progressive trance album Nothing Special is not yet another curveball, but rather the product of another artist altogether who happens to share the same name.

In March 1989, shortly before parting ways with the legendary punk band, Dee Dee Ramone switched things up and became Dee Dee King with the release of his debut solo effort, Standing in the Spotlight. Who wouldn’t want to hear what the punk bassist would sound like rapping in English and German? Evidently Warner Bros were curious enough to stump up a $25,000 advance to find out.

Dee Dee managed to persuade another rap pioneer, one Debbie Harry, to perform on German Kid and Mashed Potato Time. But even her effortless sparkle couldn’t rescue its fortunes. In the words of the critic Matt Carlson, it “will go down in the annals of pop culture as one of the worst recordings of all time”, which, to be fair, is something of an achievement in itself.

The former are British metal heavyweights, the latter are the ridiculously prolific 80s hitmakers who released a string of electro-pop chart toppers for the likes of Kylie, Jason and Rick Astley. What could possible go wrong? SAW produced several tracks for Judas Priest’s 1988 album, Ram It Down. Pete Waterman has claimed, perhaps slightly mischievously, that it’s some of the best stuff the production trio have ever done. Shame then that Priest lost their nerve and removed the tracks from the album. Surely the most rock'n'roll thing to do would have been to put them out. For the curious, tantalising snippets can be found online.

When the sadly-missed Chris Cornell teamed up with Justin Timberlake hitmaker Timbaland for 2009’s Scream, it was met with general derision. Even Cornell’s contemporary Trent Reznor claimed to feel embarrassed upon hearing it. The dirgey guitars were replaced with bleeps, squelchy bass and sampled beats.

What really perplexed the critics was the apparent note of desperation in an ageing rocker trying to remain relevant. In fact, according to interviews with Cornell, the initial collaboration and creative process was a lot more fluid than supposed. What began as the suggestion for Timbaland to remix one of Cornell’s tracks progressed into a full-fledged collaboration, with each party bringing their own perspective to create something unique.

Unfortunately – and this is said with the greatest of respect – the sum did not equal its parts. It’s an interesting curio on both of their resumes, but thankfully it won’t be the defining work that either party is remembered by.

2. Arctic Monkeys land on the moon

So when they dropped their lounge space odyssey, Tranquillity Base Hotel + Casino in 2018, it sparked a wave of raised eyebrows, general confusion, scratching of chins and even rants from angry fans: “WTF happened to my favourite band?” Was this some kind of sick joke? Were we being trolled?

Having finally broken America with the colossal AM, Turner and Co could so easily have rolled out Part II and cashed in the royalty cheques. Instead, they did something far more interesting, releasing one of the most intriguing and compelling albums of the year.

Take a closer look at the liner notes and it’s essentially an Alex Turner solo record in all but name. The other members crop up throughout, but then so do countless other musicians. For all that drummer Matt Helders talked of exercising restraint and ‘serving the song’ in contemporary interviews, we reckon he has a lot more fun behind the kit when Brian Storm turns up in the set list.

Often a frustrating listen, Tranquillity Base was certainly easier to admire than to enjoy. It’s still hard to shake the nagging suspicion that the listener is simply the butt of an elaborate in-joke. Where they go next is anyone’s guess, but it’ll definitely be intriguing.

Reed was never one to toe the line, as his bizarre 2011 collaboration with Metallica, Lulu, gleefully attests. Both acts have built careers upon doing things on their own terms. The pairing wasn’t so much of a curveball for Reed (he already had top form in that regard), but it certainly was for Metallica. Their followers are a passionate bunch, but this one tried the patience of even the most ardent of fans.

But Reed’s ultimate curveball arrived in 1975. his fifth long player, Metal Machine Music, is an abrasive industrial noise-fest, supposedly released to fulfil his record contract obligations. It wasn’t really a divisive record, in that pretty much everyone agreed it was unlistenable. The double album contains over an hour of distorted experimental noise. Whether or not anyone has actually made it to the end of the album remains unconfirmed.

Indeed, the final side of the vinyl version falls into a continuous loop that plays indefinitely. Time, however, has been kind to the record, whose sheer, stubborn anachronism towards the world it inhabits has helped it assume a level of mythical status. While the critics still generally agree it sounds like roadworks on the M4, it’s now held up as an influential piece of high art, pre-empting industrial noise rock.