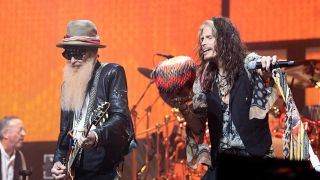 London's Palladium has hosted its fair share of stellar performers over the years – Beatlemania started here after the band played in late 1963, and Bruce Forsyth's ashes were scattered under the stage in 2018 – but in terms of an ensemble cast, not much beats the Mick Fleetwood and Friends line-up.

The show was arranged by Fleetwood to pay tribute to Fleetwood Mac founder Peter   Green, with proceeds going to the Teenage Cancer Trust. The call went out, and a veritable A-list of musicians assembled.

It was a special night. It wasn't always great – Christine McVie looked and sounded unprepared, and some of the playing was looser than you might expect – but when it all came together, it really came together.

These are the 10 all-star highlights.

A box set recording of the show is available to pre-order now. The concert will be shown in cinemas in the UK in June and tickets are available to book now.

10. Shake Your Moneymaker (Everyone, but particularly John Mayall)

It's the encore. As is traditional at these get-togethers, the entire cast reassembles on stage for a thrash through Elmore James' Shake Your Money Maker, a song Fleetwood Mac recorded in 1968.

Kirk Hammett almost steals the show with a wild, flashy solo – he looks like he's having the time of his life – but the winner is 86-year old John Mayall. Clearly held in enormous regard by those assembled, he throws a gleefully ad-hoc scat vocal into the mix and looks like he'd rather be nowhere else.

"I know what some of you are thinking," says Noel Gallagher. "He hasn't got the blues. Well, we're about to fucking find out, aren't we?" And indeed we do, as Noel leads on a stripped-down take on Sandy Mary, from 1971's Black Magic Woman.

He's solid rather than spectacular – and he's almost anonymous on the following Love That Burns and The World Keeps Turning – but he does a job.

Every time Gibbons and Tyler hit the boards the geiger counter that measures onstage charisma crackles into life. Gibbons is festooned with rhinestones and proceeds to wrangle maximum velocity from his guitar with minimal apparent effort, while Tyler – his mic stand draped in the long-traditional scarves – is cock-sure and strutting, tossing his hair and moving with all the limber certainty of a professional athlete.

Whatever your view on Neil Finn joining the cast of the Fleetwood Mac soap opera, he delivers one of the evening's more eloquent tributes to Peter Green, and gets to perform one of his most dramatic songs, Man Of The World. Like David Gilmour's guitar (more on that later), his singing voice is so identifiable with another band that it all sounds a little more like Crowded House than it probably should.

Bonus fact: the melody for Man Of The World was lifted by Ian Broudie for the Lightning Seeds song I Wish I Was in Love, on which Green received a songwriting credit. Broudie is in the audience.

Pete Townshend's amp is louder than anyone else's. We know this because he plays the riff from The Who's Won't Get Fooled Again solo, guiltily pointing out the similarity to the riff of Station Man (actually written by Danny Kirwan, Jeremy Spencer and John McVie) in the manner of someone who's been waiting a while to admit this.

Townshend launches into the song, bellows the vocal in the manner of the very best blues wailers, windmills a few chords, and for a moment or two everything teeters on the edge of chaos.

5. The Sky Is Crying (Jeremy Spencer)

The one real surprise of the evening. Jeremy Spencer abruptly left Fleetwood Mac in 1971, popping out to buy some cigarettes and failing to return. But here he is, welcomed back onto the stage by Mick Fleetwood before embarking on a beautiful version of Elmore James' The Sky Is Crying.

His slide guitar is pure, his voice aches, Fleetwood seems genuinely moved. And standing on stage left, holding down the bottom end with nonchalant aplomb, is the one and only Bill Wyman. History unfolding before our very eyes.

If we're completely honest, this isn't the slickest version of Albatross ever played. The beginning is sketchy, Gilmour's lap-steel and Rick Vito's guitar don't quite intertwine as they should, but man. That song! That sound!

You realise that Albatross inspired a musical movement: there's Albatross, and there's all those other songs that try and capture that Albatross feel but invariably fall short. Like Led Zeppelin's Kashmir, it's a song that inspires sonic plagiarism in others.

3. The Green Manalishi (With the Two Prong Crown) (Kirk Hammett)

The Green Manalishi was the last song Peter Green wrote for Fleetwood Mac before stepping into the wilderness, and its hellish themes and demonic chord progressions make it the perfect vehicle for Metallica's Kirk Hammett.

He's actually playing Peter Green's original Les Paul, the fabled 'Greeny', the guitar the song was written on. It's a guitar that was later owned by Gary Moore and subsequently bought by Hammett for a reported two million dollars. Again: actual history, right here.

Mick Fleetwood tells us that Oh Well, Part 2 has never been performed live by Fleetwood Mac, and David Gilmour makes it feel like they've been waiting for him to show up.

It's trademark Gilmour throughout, transporting the original's rather dour classical facade to somewhere entirely, well, Floydian. He solos, that guitar soars, that sublime tone fills the room, and there's magic in the air. You can take the man out of Pink Floyd, but you can't take Pink Floyd out of the man.

Oh Well, Part 1 was never envisioned as a duet, but here it is, with Steven Tyler and Billy Gibbons trading lines like it's the most natural call-and-response in the world.