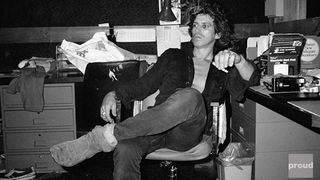 “I prefer to keep out of the way and capture candid photographs that are un-staged an natural,” says former Rolling Stones bass player Bill Wyman. He’s been a photographer for most of his life, and is celebrating his 80th birthday by staging an exhibition of iconic photographs of the band, many of which are previously unseen. The show runs at Proud Chelsea in London until November 27.

Included in the show are a photograph of Keith Richards, taken at the Rolling Stones office in New York just days after being given a black eye by Chuck Berry. “He’d left his guitar out in his dressing room and I’d just been sitting there and I just picked it up,” says Keith. “And he walks in, “nobody touches that”, bam!! But he didn’t know it was me. It don’t matter. Chuck, you did the right move, I wouldn’t let nobody touch mine either!”

Other photos show Ronnie Wood and David Bowie together after one of Wyman’s solo recording sessions at The Record Plant in Los Angeles, and the Stones backstage before a show in Boulder, Colorado, on the Some Girls tour (see gallery below).

Around the World in 80 Years: Photographs by Bill Wyman is open now at Proud Chelsea in London, and runs until November 27.