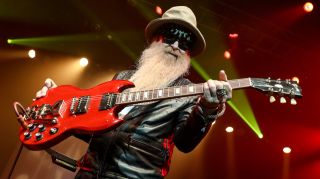 New Gibson boss James ‘JC’ Curleigh is standing onstage at his own gig, setting the scene. “When I started at Gibson three months ago,” he says, “The first thing the staff asked was, ‘Can we go back to NAMM?’”

“I told them: ‘Only if we’ve got something to back with.’”

The NAMM Show is the biggest music industry convention in the world and Gibson had a lot to prove. Last year, the company was the talk of the show: For the first time in its history, Gibson wasn’t there.

The company looked to be in ruins. Their then CEO Henry Juszkiewicz had a reputation as an outspoken loose cannon, more likely to be found hanging out with Glenn Beck than Jeff Beck, and obsessed with turning Gibson into “the Nike of the music world”.

There were questions about the brand’s quality control and direction, and dismay that all new Gibson guitars had been fitted with G-Force, a new self-tuning innovation the company had spent years developing but few guitarists actually wanted.

Gibson were officially In The Shit. In May 2018, the company filed for bankruptcy protection. It looked like the end of an American musical giant.

Curleigh was appointed President in November, with new investment and an all-new Executive team, and the fight to save this iconic American brand began. They had just three months to get a new range of guitars together and this year NAMM buzzes again with Gibson stories: about the bad old days, sure, but also about how they’ve got it right this time, by giving players (and retailers) what they want: classic designs. MusicRadar’s Best-In-Show Electric Guitar of 2019 Award goes to The Les Paul Standard 50.

To celebrate their return, Gibson threw a party - the Gibson NAMM Jam - and the night itself showed not only how Gibson can subtly modernise while staying true to their roots, but maybe also how rock music itself can push forward into the 21st century. These ‘jam’ nights are usually a relentless procession of old school worthies – players whose relevance has long been in doubt. Tonight’s show was a perfectly judged mix of old legends and exciting new artists: male and female, gay and straight, from all genres.

There’s The Rock’n’Roll Animal: Jared James Nichols, a guy who looks and plays like a young Ted Nugent. He is the double live gonzo made flesh, a blistering player that looks like an old school rocker and has the chops to match. He is unreconstructed fun.

Then there’s The Kid: Toby Lee - “the 13 year old bluesman” who turns 14 the day after the gig. Unnaturally gifted, even if the novelty of another “kid with a guitar” leaves you cold, you’d have to have a heart of stone not to wish him well. He’s getting one hell of an education.

Then there’s The All-American Songwriter: country singer Cam dials down her likeable Shania Parton schtick for a fragile version of Palace, the song she wrote for and with Sam Smith. The NAMM show can often seem like a sausagefest of people in love with polished wood and distortion. Cam is a reminder that guitars needn’t be just about testosterone and volume, they can be at the heart of an actual song too.

Next up is The Raucous Alt.Blues Duo: Black Pistol Fire - whose music style is straight out of the White Stripes/Black Keys/Picturebooks playbook, featuring a dude with a Epiphone Casino and an Animal on drums. They attack Fleetwood Mac’s Oh Well like it said something offensive about their mum, and manage to fill the stage, with singer/guitarist Kevin McKeown throwing himself around like a man possessed by the evil spirit of rock'n'roll. They are so rough-around-the-edges they could file Cam’s nails while she watches.

Then there’s The Indie Kid: Emily Wolfe. Imagine if Kiera Knightly’s cooler sister had Chrissie Hynde’s voice and J Mascis’s love for overdriven guitar. Wolfe is a brilliantly surly presence, with a taste for gnarly guitar tones and an incongruous UFO patch on her denim jacket.

What next? It’s time for The Living Legends: The Doors’ Robby Krieger brings the wobbling blues riff and quicksilver slide guitar of Love Me Two Times.

He is backed by a Rising Gay Icon: Lauren Ruth Ward supplies the vocals, having recorded an album of Doors covers last year for Morrison’s 75th birthday. Singers have a tough job tonight - the night belongs to guitar players – but her presence adds a refreshing twist to the Doors’ classic.

Next? The Bonafide Guitar Hero. Peter Frampton is all perfect teeth and infectious enthusiasm. Four Day Creep - the opening track of Humble Pie’s Rockin’ The Fillmore album, should you need reminding that this is a guy with TWO legendary live albums under his belt – is blistering, all fat riffs and rhythms that roll and tumble.

If his version of Soundgarden’s Black Hole Sun just seemed like a bit of a novelty when it came out in 2006, in 2019 with Cornell gone before his time, it crackles with meaning – an inarticulate expression of grief and loss, with Frampton’s guitar doing all the anguished talking. For Do You Feel Like We Do? he introduces his guitar, a black Les Paul: “I lost it for 32 years,” he says, “I had a live album once and if anyone has a copy, this is the guitar on the front cover.”

Next? The Alpha-Femme of Rock. Nancy Wilson with an acoustic turning Wings’ Lennon-alike Let Me Roll It into a mid-American country rock singalong.

What’s left? Well, The Reverend. Billy Gibbons: the man who met Hendrix and was there at the heart of the British Invasion – learning from Jeff Beck as much as John Lee Hooker – a retro-modernist whose favourite live band is Fugazi and who marked ZZ Top’s 2012 comeback with a mind-blowing cover of an obscure Texan hip-hop track.

Billy isn’t just one one of the best ambassadors Gibson could have, he’s one of rock’s best ambassadors. He plays a blast of I Thank You as a literal thank you to Gibson and then he’s off and running through ZZ Top’s Thunderbird, and Hendrix’s Foxy Lady (originally played by Jimi on a Strat, but who’s counting?). He invites up Austin’s Van Wilks – a guy Gibbons recently named one of his favourite guitarists - for Larry William’s 1957 tribute to rock’n’roll, Short Fat Fanny.

The star of the show is La Grange, a song with an insatiable, unstoppable riff that's perfectly built for soloing over endlessly. So they do: Kevin McKeown, Jared James Nichols, Frampton and Emily Wolfe come back on and we’re treated to a 10 minute jam in which everyone - and I mean everyone – takes a solo. Jared James Nichols looks out at someone in the audience, gestures to his surroundings and visibly mouths an astonished “What the fuck?”

WTF, indeed. Gibson are back, and tonight not only threw down a gauntlet to their critics but built a bridge between the past of guitar music and its future.

For more from NAMM, visit our sister site, MusicRadar.