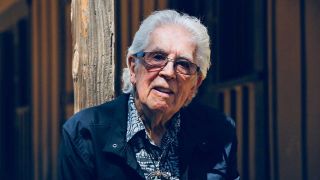 “This project has been a true labor of love for me, and I can’t wait for people to hear the fireworks that took place!" says Mayall.

Below, John Mayall chooses eight records that changed his life.

"My father had a good record collection. He was a part-time guitar player, so a lot of the records were guitar orientated, so I heard a lot of those when I was growing up. But my first real love was Ravel's Bolero, which has a great rhythmic build up.

"It's a very simple phrase, which elevates as far as the piece goes on. So I learned a lot from that, the fact that you could really express yourself through rhythm."

"The next thing that really attracted my attention was the of the work of guitar player Eddie Lang, who did a lot of work with the violin player Joe Venuti. He also played some duets with the great blues man Lonnie Johnson. There's quite a few wonderful duets they did together."

"Albert Ammons was one of the great boogie-woogie players. I really admired him, and Pete Johnson and Meade Lux Lewis, who were the the kings of boogie-woogie in the 1940s.

"The first record I bought had Albert Ammons on one side and a track by Meade on the other. Two different people on one 78! I think people will enjoy the energy of Shout To Joy!"

"My father had a really good record collection, so there were lots of great guitar players I heard through listening to his stuff, but I would pick Charlie Christian, who was the guitar player who played with Benny Goodman for many, many years, and is on quite a few of his records.

"Seven come Eleven is a good one to start with because it has all all the energy of the master's playing, and if you get addicted to that then you can go to your local record store and pick up a club recording called Swing To Bop. I think you'll be quite satisfied!"

"Art Blakey was the leader of Art Blakey and the Jazz Messengers, and I always admired his taste. He always put great lineups of musicians together. I had the pleasure of seeing him in concert when he had had Lee Morgan on trumpet and Wayne Shorter on the saxophone and Bobby Timmons on piano.

"I think his most popular track of his would be Moanin', which is a very catchy tune. It was something that a lot of my friends listened to."

"Cannonball Adderley was a great saxophone player. Everything he did attracted me:  not only was his playing fantastic, but he was a great band leader. He always talked to the audience and told him all about the songs hew was going to play, and he was a great entertainer.

"I did get the pleasure of meeting him in the 1970s when he came to Los Angeles, and he was a great fella to hang out with, and a very knowledgeable person in the Jazz world. He also had a lot of bluesy musicians working with him, and you'll enjoy listening to him."

"Django Reinhardt was a wonderful gypsy guitar player. He had a unique style because he'd unfortunately lost the use of two of his fingers. So it was amazing to hear what he could play with just three three fingers (including his thumb on his left hand).

"One of the tracks I think might be of interest to listeners is a thing called Mystery Pacific, but anything you put on by Django is going to be a good treat for people, especially the songs he recorded with the great violin player Stéphane Grappelli."

Robert Johnson - If I Had Possession Over Judgement Day

"Robert Johnson is an almost mythical character, because he died at a very early age and was supposedly poisoned by his one of his girlfriends. But nobody really knows how quite how he died.

"But before he passed away he recorded some wonderful singing and guitar playing that was really quite unique. I think Eric Clapton was one of the first to turn me on to Robert Johnson's work, and to the variety of songs that he wrote. The king of the delta blues!"