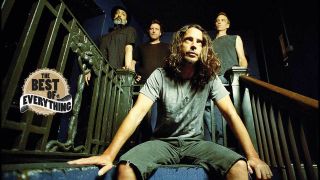 I was lucky enough to meet Chris Cornell and Soundgarden backstage before their 2012 Download Festival appearance, as my friend and I were [there to interview] Ben Shepherd. They were easy going and laid back, Chris had a quiet intensity that was something to behold when unleashed on stage, as the band went on to give a knock out performance.

Soundgarden are a big influence on our band and my songwriting, so rather than picking out all the singles, I chose some killer deeper cuts.

This was the comeback single after the band’s long break between 1997 and 2010. It is just classic Soundgarden at their very best, dating from the Badmotorfinger sessions. This song still sounds as fresh now as it did then. It also got more than a few fans excited over their very welcome return.

Another of my all-time favourites. Fresh production and I love the ghostly vocal effect and impossible time signature. A real mind-melter of a tune and quite rightly a big hit for Soundgarden.

This song has a truly stellar vocal performance from Chris Cornell. What a range! At times it is so high that dogs prick up their ears! All set to a crushing guitar riff.

The opener from their Superunknown masterpiece album. I just love the rolling drum intros and great lyrics. ‘Seal my tomb without a face, I’m going to the lonely place.’

This song has the most awesome Matt Cameron drum work out going on. I love trying to follow the kick drum pattern on this, it will blow your mind. Heavy yet ethereal, with a hilarious video that was directed by none other than Dave Grohl.

Ultra heavy slowed down dirge, with an almighty chorus that sounds like the heavens opening up. Absolutely breathtaking live. This song is a serious masterclass in rock power.

Another one from the King Animal album, more mellow but with a gorgeous vocal melody and a great harmony. Chris was in a league of his own when layering vocals, while the song maintains a lot of emotional weight.

Slaves And Bulldozers (from Badmotorfinger, 1991)

A live favourite, so much so the band would end their live sets with it, so it must have been close to their hearts. Even more poignant now as it was the last song they would play live, interspersed, coincidently, with Led Zeppelin’s In My Time Of Dying at the Fox Theatre in Detroit.

A song that sounds like the title. Beautiful and expansive, while pummelling you with a huge riff, while tweaked out feedback unsettles you in the background followed by Stooges-esque saxophone on the crescendo. Spellbinding.

The Vigil’s new single, Find A Way, is available now – check out the video below.

Celebrating the genius of Chris Cornell

Soundgarden: "We never got used to the success"