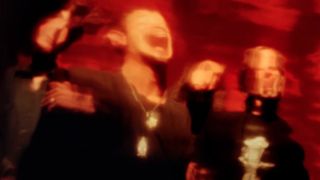 Kevin Westenberg has posted his original photograph that was modified for the cover of Soundgarden’s 1994 album Superunknown.

Some have said that the cover of the record is like a “screaming elf” with his hands in the air – but the “elf” is late frontman Chris Cornell who is flanked by bandmates Ben Shepherd and Kim Thayil.

Westenberg uploaded the picture to Instagram where he gives some background details behind the photoshoot and says that in some ways it was “just one glorious accident.”

Westenberg says: “I’m fortunate that during my career I have worked with many of my art director heroes. There have been many discussions concerning visual philosophy and theory as to what makes something work and why the opposite holds true.

“In some ways this cover was just one glorious accident. There was no real plan on the day of the album shoot for Superunknown. Most times with every musician, no matter which style of music I was working around the world, there would rarely be a plan.”

He continues: “I pushed myself to the point of exhaustion constantly. If there were no nerves before a big shoot like this one with Soundgarden, then you’re walking dead. Forget it. I knew the stakes were high for this band that I loved so much. The absolute need to perform was there throughout.

“Also, as someone who was born in Seattle but had by then immigrated to the UK, it was even more important. Maximum creative pressure is never a bad thing. This here is the full frame used for the album cover for Superunknown.

“While constructing the idea, I never expected this to somehow ever equate with the fantastic range of musical ideas created on the album. There’s always an added bit of luck and happenstance thrown in as well.”

He adds in a side note: “I was always disappointed that drummer Matt Cameron was cut out of the cover by the crop. Not my choice. Also, where did the name ‘screaming elf’ ever come from? Definitely not my choice! Good Times.”

Frontman Cornell was found dead in his Detroit hotel room last month, with the coroner’s office ruling his death as “suicide by hanging.”

Chris Cornell: Drugs “did not contribute” to death