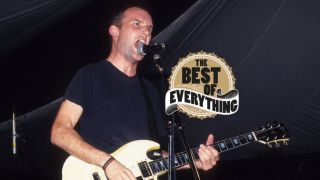 Founded in 1980 by teenagers Ian MacKaye and Jeff Nelson in order to release a posthumous single by their high school band the Teen Idles, Washington DC independent record label Dischord quickly became identified with the city’s burgeoning hardcore punk scene, releasing a slew of influential EPs – among them records from Henry Rollins’ S.O.A., Virginia’s Scream, the impossibly intense Void and MacKaye and Nelson’s new band, Minor Threat – which put DC hardcore firmly on the national map. More than just a record label, Dischord existed to document DC cultural life, to engage and connect with the local community, and to create a climate in which independent artistic thought and deeds might be nurtured and flourish.

Over the past 35 years, the label has released some of the most vibrant, vital music to emerge from the US underground rock scene: here are 10 inspirational blasts from the Dischord House vaults.

10. NATION OF ULYSSES – The Nation Of Ulysses (1990)
Want to know where Refused copped much of their sound and aesthetic circa The Shape Of Punk To Come? Look no further than the Nation Of Ulysses. Modestly describing themselves as “probably the most important development to beset music since electrification”, the flamboyant, insurrectionist N.O.U. were a self-styled ‘terrorist group’ peddling leftist manifestos as sharp as their cheekbones against a punk clatter that permanently threatened to dissolve into chaos. Pro tip: everything that cocksure frontman Ian F Svenonius has been involved with is worth checking out.

9. REPTILE HOUSE – I Stumble As The Crow Flies (1985)
The summer of 1985 – dubbed ‘Revolution Summer’ – was a tremendously fertile period for the ‘DC punk community, with a raft of new bands emerging, intent upon re-defining the boundaries of a hardcore scene they no longer considered home. Clearly influenced by Joy Division and British post-punk, Baltimore, Maryland’s Reptile House were one of the articulate new voices to emerge, and Ian MacKaye captured their youthful optimism on this, their debut EP. A full-length album followed before frontman Daniel Higgs went on to form the excellent Lungfish, and drummer London May decamped to join Glenn Danzig’s post-Misfits band Samhain.

8. Q AND NOT U – On Play Patterns (2002)
Quirky, cerebral, arty and challenging, DC post-hardcore collective Q And Not U sought to blur the boundaries between punk rock, funk and dance, re-wiring DC hardcore conventions as Dischord entered its third decade. The bass guitar-free On Play Patterns EP – featuring the songs Ten Thousand Animal Calls and Soft Pyramids – marked the group’s transition from a quartet to a trio, and opened up a new vocabulary for the band upon which they expanded later that same year with their brilliant second album Different Damage.

7. CIRCUS LUPUS – Pop Man (1992)
Produced by Joan Jett, Pop Man is a gloriously ramshackle, clattering punk ‘n’ roll single which recalls The Fall at their most charmingly aggressive. Frontman Chris Thomson had served time as the bassist in first wave DC punks Ignition, but Circus Lupus was his finest hour, with both 1992’s Super Genius and 1993’s Solid Brass worthy of exploration for those who like their punk rock literate, claustrophobic and wired.

6. JAWBOX – Jackpot Plus! (1993)
One of only two Dischord bands to depart the label for a major in the wake of the panicked A&R minesweep that occurred post-Nevermind (the other being Shudder To Think), Jawbox’s farewell to Dischord was this thoughtful, nuanced double-hit of emotive alt. rock. Both Motorist and Jackpot Plus! were recorded for the quartet’s Atlantic debut For Your Own Special Sweetheart, but these versions eclipse their later incarnations.

5. SHUDDER TO THINK – Hit Liquor (1992)
One of Eddie Vedder’s favourite bands, art-punks Shudder To Think were built around the swooning, sweeping vocals of androgynous frontman Craig Wedhren. More than 20 years after its release, this still sounds like rock music beamed in from the future. All stop-start, angular guitars and breathy, elastic vocals, Hit Liquor (and B-side No Room 9, Kentucky) floats and ducks between time signatures with an abandon more suited to jazz than orthodox punk rock. As with Jawbox, STT’s move to the majors yielded no discernible benefits whatsoever.

4. FUGAZI – 3 Songs (1990)
A bridge between the quartet’s early EPs and their stunning debut full-lengthRepeater, the three songs on er, 3 Songs find DC’s most inspirational, influential band at their most nimble and supple, bearing out Ian MacKaye’s original vision of the band as a cross between MC5 and The Ruts. Originally released as a limited edition as part of Sub Pop’s Singles Club collection, the EP received its full release via Dischord in January 1990. “Song number 1 is not a fuck you song,” chorused MacKaye and co-vocalist Guy Picciotto on the lead track, but of course, like everything Fugazi did, it kinda was, and thrillingly so.

3. EGG HUNT – Egg Hunt (1986)
Recorded in London over Easter weekend 1986, hence the band name, Egg Hunt was a one-shot side-project for old pals MacKaye and Jeff Nelson, and their final musical collaboration. The real treat here is the single’s B-side, the brilliant We All Fall Down, a song written for, but never recorded by, MacKaye’s mid ‘80s ‘emo-core’ band Embrace, which neatly prefigured what the singer would go on to do with Fugazi.

2. RITES OF SPRING – All Through A Life (1987)
A final missive from ‘Revolution Summer’ issued long after its fires had burnt out, theAll Through A Life EP represented a swansong for a much-loved quartet whose influence and legacy far out-stripped their brief career. Fronted by Guy Picciotto, Rites of Spring are cited as the pre-eminent band of the mid ‘80s emo-core scene, but their progressive, expressive, forward-thinking punk rock cannot be constrained by such a narrow definition. With Fugazi, Picciotto and drummer Brendan Canty would find the freedom and space to truly expand upon ROS’s huge promise.

1. MINOR THREAT – Salad Days (1985)
Released two years after Minor Threat broke up, the poignant, powerful Salad Dayswas Ian MacKaye’s requiem for the original hardcore dream, a bitter, caustic, nostalgia-free overview of a scene the idealistic young punk saw as compromised, stagnant and played out. “Look at us today, we’ve gotten soft and fat,” he sang. “Waiting for the moment. It’s just no coming back.” MacKaye’s sarcastic laughter before he delivers the lines “We call those the good old days… What a fucking lie” says everything about his disenchantment with the movement he helped propagate. Even as the single hit the shelves, DC punk’s inspirational leader was moving on…

Ian MacKaye on Minor Threat, Fugazi and the power of Punk Rock