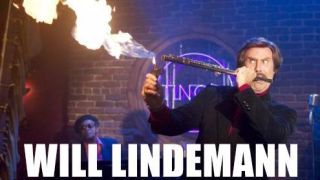 If you’re a band who have an unhealthy obsession with pyro and propensity for being a bit weird, the internet will respond with memes. Lots of them.

Here are 10 of the greatest Rammstein memes ever made. Beware: some of these are highly flammable.

Imagine being on a flight that was passing over an outdoor festival which Rammstein were headlining. The wings would surely melt. That’s because a muscular man such as vocalist Till Lindemann can hold many sparklers at once. Oh, to be held in those arms.

Take your copies of Deutsch Heute and put them on a massive bonfire. All you need to learn German is a copy of Rammstein’s best-of Made in Germany 1995–2011 – just hope that any conversations you do have with German speakers revolve around cannibalism, incest, dodgy priests and America. You’ll be fluent in no time. Scheiße!

We’re not sure how, but Till Lindemann managed to pull off this Donquixote Doflamingo look at Download in 2013. How his pink furry coat never went up in flames, we’ll never know.

Ron Burgundy’s polyester suit would probably go up in flames if he went within one mile of a Rammstein concert. Here he is paying homage to their pyro mastery using only a flute and a Zippo lighter.

We don’t know why Mark Ruffalo looks like he’s about to cry. He – or the Hulk, rather – made the mess below in the first place. See how he’s trying to blame Rammstein for destroying a city? They may have a spectacular stage show, but it’s done with safety in mind. They don’t kick off and turn green if they’re having a rotten day.

Imagine being the Queen and having to sit through a Royal Variety Performance or something to do with horses every week. You’d be bored shitless. We’re certain any member of the royal family would enjoy a Rammstein gig. They’re practically German too.

Ah, there’s Disaster Girl dishing out some hot charity to people with a poor taste in music. If you see her and aren’t a massive fan of Rammstein, just say how much you love Neue Deutsche Härte and your home should remain flame-free.

Does Till Lindemann have tanned retinas? We’ve wondered that for ages.

Forget what the experts say, because next year we’ll all be looking like an S & M street performer. Yet Flake would probably think this outfit is “a bit much” (but in German).

Remember that time you wanted to impress your German relatives and started singing Bück dich and they had to leave quite suddenly? That was a bit awkward.