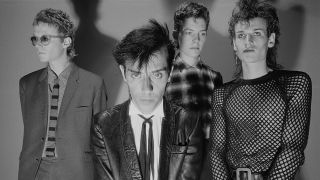 Post-punk is enjoying something of a renaissance at the moment. From the buoyant revival currently being ushered through Ireland by The Murder Capital and the Mercury Award-nominated Fontaines D.C., to the chaotic angst filtering down from England's north courtesy of the likes of Drahla and Life, the genre has found new vitality and meaning in the chaos of the present day.

Propping up the west country's contribution to this ongoing British revival are Naut. They may not be Bristol's most well-known addition to the genre's resurgence – that would surely have to be their chart-bothering neighbours Idles – but they channel the genre's brooding core in a way that sets them quite apart from their contemporaries. Borrowing from the gloomy, introspective template laid down by their 80s predecessors, they go heavy on the goth for a sound that would no-doubt make the likes of Peter Murphy flush with pride.

To celebrate the upcoming release of their new EP, Semele, the band join us to talk us through the post-punk albums that have inspired them the most.

Gavin Laubscher: I don’t think it would be possible for me to compile a list like this without a Bauhaus record on it. The question was, which one? The opener of this album, She’s In Parties, was the first Bauhaus track I heard, believe it or not. Ever since that first riff I was hooked. It was that track that started my journey on the path that I am on now in some ways, so Burning from The Inside had to be the pick.

Peter Murphy’s vocal delivery and the inventive riffing of Daniel Ash opened up a whole new form of music for me, something that made everything I had listened to before seem ordinary and by the rules. Theatre and drama – the hallmark of Bauhaus – abound, but there is tremendous variety here too, with the softer, but no less adventurous, tracks like Who Killed Mr Moonlight and King Volcano adding a change of pace from the more rocking numbers (if you could call them that?). I also appreciate that you get a sense of what would come post-Bauhaus with hints of Daniel Ash’s later works showing in the tracks.

Gavin Laubscher: If ever there was an album that struck the balance between antagonism and accessibility for Killing Joke, this was it. In some ways, I feel it reflects the two sides of post-punk as a genre in that regard.

I’d argue it’s perhaps their strongest album, with every track bringing something to the table and showcasing the different aspects that make Killing Joke the band they are. Jaz Coleman’s lyrics and their delivery, the tribal rhythm section and Geordie Walker’s stand out guitar work all pull together to create the unique sound that only Killing Joke have.

Gavin Laubscher: Before their more poppy hit Melt With You, Modern English released this masterclass in flanger pedal abuse. With its Hawkwind-esque spaciness and some of the post-punkiest post-punk drumming, the whole album is dripping with that late 70s early 80s energy that I find so endearing.

The guitar work on this is killer, the approach to effects is really innovative and the fact that it can range from thin and spidery riffs, to pure texture, through to cracking riffs, gives a real dynamic edge to the tracks. The synths and use of samples weaving in and out of the guitar and underpinned by the throbbing rhythm section is something that I find as inspiring now as I did when I first heard it.

It encapsulates that 'anything goes' attitude to music that was prevalent at the time: if punk started burning the rules of what music was, then the bands that followed chucked petrol on the fire and this is record is proof.

Jack Welch: This is the perfect outsider record and a masterpiece of Scandinavian post-punk. At times it is fragile and reflective, while at others it is cold and driving, however, it is always brimming with vitality.

Of course, a band is a coming together of talents and Cortex demonstrate this here but it’s undeniably the magic of their late frontman Freddie Wadling that makes this album shine. In Sweden he is revered as a legend, of Captain Beefheart stature, for what he brought to the country’s music scene and Spinal Injuries is one of his great works.

A few years ago, I had the pleasure of seeing his last ever hometown show in Gothenburg, shortly before his death. His presence manipulated the air and his songs felt like spells.

Jack Welch: This compilation album, comprising two EPs, showcases this unique group at their off-kilter best. Guitarist Mick Harvey has described TBP as being very much a “live band” – one to be experienced in the flesh, rather than on record, but this compilation is an album I put on again and again.

The Birthday Party’s angular guitars, stomach-churning bass lines and the sickly howls of Nick Cave are never bettered than across these EPs. Their music is like being hooked up to the mains or feeling strung out after too many hours awake on various chemicals.

Jack Welch: I Coldy Stare Out and Walking On Both Sides from this album are probably the most post-punk sounding songs ever. There is a melancholic beauty to the record, where each track straddles that thin line between being downbeat and yet somehow danceable, to me epitomising a crucial aspect of the sound of post-punk music. Those minimal guitar riffs and bass lines and downcast vocal melodies combine to make sparse, icy landscapes of sound.

Andi Effe: If we’re looking at bands who have made waves in this scene in recent years, there’s no way we could forget Drab Majesty. The Demonstration is an utterly incredible album, as soon as I heard the start of the first full track Dot In The Sky, I was hooked. As far as I can tell, the lyrics seem to focus on the Heaven’s Gate cult whose members committed suicide after seeing a comet which they believed was a UFO. I always found this a fascinating subject to focus an album around but then I’ve always been really interested in reading about cults.

Musically, the album is beautiful with dream-like guitars interwoven with synths that give the whole thing an other worldly feel. This isn’t one to miss.

Andi Effe: Asylum Party are a band that I’ve only started listening to in the past few months and I really regret not checking them out sooner. On listening to this album I was really surprised that this band isn’t better known, the instrumentation is very simple but works very well. The opening track Play Alone is fantastic and I love the sound of their drum machine. Sadly their bassist and singer Thierry Sobezyk passed away earlier this year.

Andi Effe: Turkish Leather opens with the energetic and relentless Zemmoa and overall it is a moody and broody album and I have a real soft spot for the sound of the bass throughout. I’ve always found it fun to listen to this album when driving around at night, it just feels so fitting. I keep hoping that Ritual Howls will come back to Europe, I was lucky enough to see them at Wave Gotik Treffen a few years ago and they were sublime.

Gavin Laubscher: I doubt there are many who would argue against this being one of Siouxsie And The Banshees’ finest moments. The opening track, Spellbound, is the dictionary definition of a banger and is perhaps their most played track, however the whole album goes from strength to strength. It has to have one of my all time favourite vocal performances and I feel it perfectly straddles the Banshees’ punk origins and the more refined sound of their later albums (which are still killer).

This is another album that I feel in some ways epitomises the genre, with almost pop moments shifting into wonky and off kilter tracks only to arrive at all an all out frantic banger. It encapsulates the range of the genre in an unforgettable 40 minutes.

Naut's new EP, Semele, is released on November 8 and is available for pre-order now. Check out the video for single Semele below, or catch them live at one of the following dates: