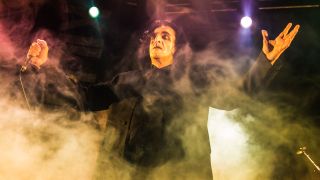 With a string of European tour dates on the way, singularly intense Killing Joke frontman Jaz Coleman ponders why people cross the street when they see him coming. Classical composer, student of the occult, green revolutionary, reincarnated soul, cigar smoker… Will the real Jaz Coleman please stand up?

Their hospitality. We always had lots of people staying at our house. So I took the idea of putting people up and feeding them, but at that point it stops.

I’m so far left in my beliefs that I’m right [laughs]. I don’t ever seek to own anything. I lose it anyway. Most people just want access to things instead of the burden of ownership. I’ve pretty much got two sets of clothes: I wear my leather jacket with various T-shirts, I’ve got three pairs of trousers and two pairs of footwear. I’m not materialist and I hate our globalised world. I’m not a Marxist – there’ll always be trade – but it’s gone too far. I believe in a really extreme, green, all-out revolution. That’s the only way we can save the human race.

And why do you think that is?

Because I look horrible… people cross the street when they seem me coming, so privacy’s never been a problem. People are surprised when they actually meet me.

It’s very difficult to be an artist and hold down a family. Or a relationship, for that matter. And certainly children. That’s always a struggle. It’s near impossible. So once you’ve embraced the fact that this is how it’s going to be – you’re going to see your children infrequently, you won’t be a perfect father, you can’t have everything and be everything and all things to all people – life gets a bit better.

I do what I do with music with the blessing of my daughters. It means I get to see them – well, two of them – twice a year, and sometimes not for a year. These are sacrifices you have to make. It’s difficult, but you can’t have it all.

Do you believe in magic?

Absolutely. It worked for us. How would Big Paul [Ferguson] and myself have found Youth and Geordie if it hadn’t been for a spiritual act? We didn’t know how we’d find the other two, so we did a ritual, a rite of dedication, and they were found within two weeks. Eight weeks later everybody knew about Killing Joke in the UK. So things happened very fast.

The divine… of course. But not in the conventional way the Christian religion would have it. If you’re looking for a saviour-god who is going to intervene on this earthly level, I don’t think it works like that. Human existence on this earth is pretty amoral. But in the greater scheme of things you have to study the ideas of parallel universes, by [Hugh] Everett. There’s no such thing as death. We’re only just discovering multiple time lines. We’ll be able to go into the past, and future. In the distant future, Paul Raven [former KJ bassist who died in 2007] is not dead yet. We’re just starting to access this world. Which is one of the great things about living in the 21st century. Our conception of time as we know it will eventually dissolve.

Was there anything left unsaid between yourself and Paul Raven?

No, there wasn’t. He knew exactly how we felt, and I was in touch with Paul pretty much until the end. One thing me and Raven always shared together was a good Rocky Patel cigar, and I’m really glad that when he came through Prague with Ministry I got my mates to give him a cigar, so he knew it was cool between us.

What’s the biggest mistake you’ve made in terms of your career?

Well, it’s all a learning curve, isn’t it? We make mistakes every day, you just have to try to improve on them. You could say it was a mistake when Youth took massive amounts of LSD in 1981 and went completely nuts. But it wasn’t, because it opened him up and he subsequently became a mystic and a great producer. They’re all experiences, so I don’t look at it as a black and a white thing.

There have been several mistakes along the way, but the will to keep Killing Joke going has always been strong and overridden everything. It’s certainly beyond money. We do it because we love it. It’s a hard life being in Killing Joke, but a fucking great one.

In the scheme of things it’s all quite insignificant, isn’t it? I follow the views of Professor Christopher Knight who believes human activity should be governed by our ancestral spirits. I feel very close to Paul Raven. Sometimes I feel his presence round me, and other ancestors my father and other people I’ve loved and who have moved into the next world. The last thing John Hicklenton said to me before he drank the liquid and died was: “I’ll get the drinks on the other side for when you come through.” Because I’d told him that I’m going to drink in the next life… I’ve already had my share in this one.

Killing Joke kick off their European tour in Dublin on 30th October.