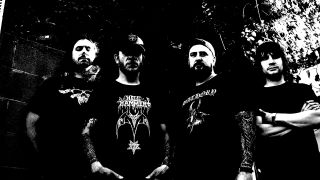 “Oh yeah for sure, I still enjoy the shit out of it or I wouldn’t be doing it,” says Ben Koller. We’ve just asked one of the busiest men in underground music if he still gets the same thrill living life on the road as a full time touring musician, while keeping one or possibly both feet firmly in the ethics of DIY punk rock. “I mean, sure, it’s not for everyone,” he continues, “it’s certainly a nomadic lifestyle and couldn’t more different from having a normal nine to five job. But I never really wanted that anyway, this affords me the freedom to do a lot of things that I wouldn’t be able to do, like travel the world, and I still love playing live. So I can’t really see myself operating in any other way.”

This probably isn’t a shock to anyone. If you are familiar with Koller’s work in Mutoid Man, Killer Be Killed or, most notably, Converge you’ll know we are talking to an individual who barely stops long enough to put his feet up at home before heading back out on tour. And, just weeks after bringing Converge over to the UK for the recent Temples and Deathwish festivals, he’ll be back on our shores again shortly, bringing his crust punk collective All Pigs Must Die over for their debut British show.

“I’m so excited to come over, to be able to do anything with APMD,” Koller tells us when asked about the forthcoming London show. “It’s very, very difficult to get us together to do anything. I’m in four bands and I’m married with two kids, Kevin (Baker, vocals) has a full time job and runs his own business, Matt (Woods, bass) has a full time job and a wife and kid, Adam (Wentworth, guitar) has a full time job, a wife and is in New York while the rest of the guys are in Massachusetts and I’m in upstate New York. It’s just really, really tough to get us all together, but I feel now that we are in a really good place to do something. We’ve probably only done two shows in the last couple of years and it’s good to get wrapped up in something like this again. It’s just fun – probably the most fun band ever – we’re just really good friends, so when you go out and play shows it feels more like a vacation than a tour. Our goal is just to keep it going and whatever comes along we take as it comes, this was just a really cool opportunity to play some shows and I’m really excited to play London for the first time with this band.”

This is a hugely refreshing thing to hear from a band member, it’s not surprising coming from Koller, but definitely refreshing in the grand scheme of things. There aren’t many people in the wider world of music that have taken the sort of route as Ben, and his success is even more impressive when you consider the lack of compromises he or his band have been willing to make.

“It can be alienating for sure,” he nods when asked how he feels in some of the more mainstream company his bands now keep. “I mean we dabbled in tour comforts for a bit in Converge, we’re all getting into our forties now and we don’t want to be sat in CBGB on a scabby couch, but it just comes down to the fact that we don’t really fit in stylistically. I can’t think of too many other bands in our position that do so much for themselves. We design all of our artwork, our merch, we book a lot of our own tours and hotels, rental cars and plans. I don’t think there are any bands that do that much just by the members of the band themselves.”

Which leads to Ben finding himself in some unusual situations.

“I just did a tour with Killer Be Killed in Australia and I was the only guy setting up my own kit!” he laughs. “It was kinda funny, there were all the techs and then just me sat behind my kit. The contrast is often so black and white, that tour was so accommodating, there were so many days off and the hospitality was amazing. Then I did a tour with Mutoid Man where there was just the three of us, no road crew, in a van with broken air conditioning in the middle of summer. But I really don’t mind getting in a van and doing shows like that, it’s very satisfying to me to know that I can just get in a van and go and fuck shit up like that.”

Obviously, far from wishing a simpler life, Ben is adamant he feels lucky that he can still continue the lifestyle he is so immersed in.

“I feel like there are only a handful of bands, someone like Fugazi maybe, who can do what they want to do and connect with people just though the sheer strength of their music alone,” Ben begins. “I feel like in Converge I am in one of those bands and I feel really lucky to be in the position I am in.”

That’s all well and good, but does Ben ever feel like he would love the comforts of touring as a legitimate rockstar? If we could offer you a place in a band that made millions touring their back catalogue a couple of times a year or the meagre but creatively fulfilling life you currently lead, which would you choose?

“If I could be in, say, Metallica?” asks Ben. “Well I’d like to try it and try and make something great out of it, of course. But, if you are saying tour the world making a lot of money occasionally in a huge band that I don’t like the music of? No, I’m happy doing what I do. Usually when you get together and have a band meeting to say ‘hey let’s just try and get really big guys!’ it doesn’t end well.”

Again, we can’t say we’re surprised to hear it.

All Pigs Must Die play the Underworld in Camden, London on Sunday 5th July