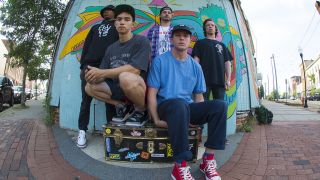 Undoubtedly one of the most exciting new bands to enter hardcore in years, Baltimore five-piece Turnstile have made amazing strides in a short amount of time. They’ve supported the likes of New Found Glory and The Story So Far, and signed to Roadrunner Records off the back of their brilliant debut album Nonstop Feeling.

And while the album is great, these songs really need to be seen in the live environment. Their mixture of classic hardcore, crossover riffs, hip-hop bounce and a slight touch of alternative rock make this young quintet one of the most exciting and energetic live bands in years. We spoke to bassist Franz Lyons about where he sees his band heading in the future…

When Turnstile formed back in 2010, what was the band’s intention?

“Well it’s all been a big accident this whole band, so it’s hard to say. I fell into it really. I was in Germany with Trapped Under Ice, and Daniel (Fang, drums) and Brendan (Yates, vocals and TUI drummer) asked me if I wanted to be in a band with them. I thought they were going to ask me to play drums, but they said ‘We need a bass player!’ and I said ‘I don’t play bass dog!’ So I had to learn and catch up with everyone else real fast. But Brendan is the mastermind of the band and I don’t think that even he thought past the demo stage. There was no plan, we were like ‘Okay, what’s the next thing we should do?’. We problem solve as problems appear.”

Is that why your music feels so free and unrestricted from the usual traits of hardcore?

“It’s a reflection of all of our individual ears and having a really eclectic taste throughout the band. Someone will always be playing something that the other four haven’t heard, I’ve picked up so much stuff from the other guys and they’ve probably picked up a lot from me too. I feel like with us listening to electro bands and these tiny pop-rock bands, you can’t write the same record over and over.”

Has there been a backlash from the militant part of the hardcore scene?

“No, I don’t think so. And, listen, I’d understand it if there was. There are some bands that should just tread the path of that style. If your favourite bands are youth crew bands and you want to sound like Youth Of Today or Better Than A Thousand then that’s absolutely what you should do. There are so many sub-genres, and those bands that are devout to those genres aren’t going to add any other flavours. I kind of feel like, if you are a hardcore or a metal band, you shouldn’t be looking outside of the box.”

But you guys do.

“Yeah but there was no ‘We want to sound like X, Y or Z band!’ so we didn’t have that level of thought or dedication to one scene. So we were able to go out and just make the music that we want to make.”

So do you guys have the intention to cross over to everyone?

“That’s a hard question to answer because I don’t think it’s something that we go out of our way to do. If you hear something good you can’t deny that it’s good – you can say you don’t like it but you can’t deny that it’s good. I’ve grown up listening to a lot of metal, I used to go see Skeletonwitch and a lot of bands from that scene, and I like a lot of that music, so to be accepted by those people would be really cool.”

You’ve signed to Roadrunner Records, a metal label to many people, so you might cross over into that world.

“I’ve tumbled around with the idea of being on the label, I’ve been thinking about it a lot recently, and I’ve started thinking about the bands that introduce you to a new type of music you become really passionate about. We might not be the most hardcore band in the world, but I play and go to hardcore shows. It could be really cool and special if we are the band, in that commercial aspect, that people hear and say ‘Hey, I think I might like that type of music!’ That’s a really cool thing to me.”

There are plenty of great new labelmates there, too. Do you see a shift towards heavy music entering the mainstream?

“It sort of feels like it, yeah. It’s crazy to see how rock music used to be so prevalent and then it became a lot of electronic music. I hope the exposure we get from being on this label can see a shift in that. When we do stuff like the New Found Glory tour and, to start with, I was thinking ‘I don’t know if these folks are gonna rock with us?’ and to see people look at us and go ‘Okay, you’re not my usual type of music but I can get off on the energy and I like what you’re trying to do.’ That’s an inspiring thing for me.”

There has been a lot of talk recently about punk being the preserve of white men, and if it really is part of an alternative culture then it should be more inclusive to minorities. As someone who is not a white man, what’s your take on that idea?

“Whoever said that has obviously never been a part of punk and hardcore culture. I think that’s hilarious. I’ve always found this scene so inclusive, and, just because you might not see so many black faces at a show, it doesn’t mean that all those people don’t all feel the same. You don’t see as many white people at hip-hop shows, does that make them inherently racist? I don’t think so. How people feel is all I care about, and I get the best feeling from hardcore shows.”

Turnstile release a new 7” Move Thru Me on September 16.

The 10 best hardcore songs according to Vinnie Caruana

The top 10 most underrated US hardcore albums

Watch the new video from Turnstile for Addicted