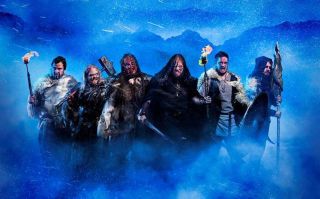 To name the top 10 folk metal bands of today is no easy task to be handed. So much of music is personal preference and your own taste in music. Some prefer the bands leaning more towards the folk part, some prefer bands leaning towards metal.

Some of you might completely disagree with my choices, and that's fine. I've tried to include bands that are still going strong, new talents that are doing something new in the folk metal genre, and bands that I personally think make great music.

Also we won't put ourselves on this list, but feel free to insert us wherever you please.

10. The new wave of folk metal

Okay, we’re of to a weird start. But I have a few bands I want to talk about. For a very long time, the folk metal scene has been dominated by bands from Scandinavia and Northern Europe with a lot of focus on Norse, Celtic, Gaelic and similar themes and mythology. But for a few years now we have seen new bands rise from around the world, bringing their culture and mythology into the folk metal scene. This is something I really enjoy hearing. So for this first entry I will just mention some bands that mix in some new sounds to the folk metal scene.

A bit of a weird start, but I really hope we see more bands from around the world using their culture and folk instruments to bring new music to the community.

A Swedish band with a lot of focus on the folk part of folk metal; often described as metal-inspired folk music. For a long time they have relied on the bouzouki and keyed fiddle driving the music and playing melodies accompanied by more classic metal drums, bass and keyboard. A great band if you're into the more traditional folk sounds.

A classic Swedish band that made a big impact with their first album Till Fjälls mixing melodic black metal with folky tunes. The lyrics are mainly about nature and its beauty, but for a few albums he went a bit further, singing about space and the cosmos. But recently Vintersorg went back to his roots with the sequel to his debut album named Till Fjälls Part II. And if this isn't folky enough for you, a tip is to check out Vintersorg’s short-lived but very folky side-project Otyg.

Yet another Finnish band nailing it. With their first two main releases they went straight to the top for a few years, playing a lot of big festivals. Great musicians playing great music incorporating both violin and accordion in an expert way. Mixing folk/power/melodic death, they have produced an epic sound that felt amazingly fresh at the start of their career. Even though their latest releases haven't quite managed to keep up with their earlier material, they still produce great quality metal.

Another great Swedish band that probably won't need much of an introduction. Mixing great heavy and melodic metal with folk music. Starting out with black metal influences and later leaning more towards melodic death, but always incorporating the folk part very well. They have made some really great albums throughout their career and they are still going strong.

One of the bands that took the lead in bringing forward medieval folk metal that had quite the uprising in Germany. Being a personal favourite of mine, the band use mainly medieval bagpipes, but also different folk instruments from all around the world. Mixing both traditional and original melodies with a quite modern metal sound, they have made a lot of good albums and played some of the best live shows.

One of the bands who really brought the folk metal scene forward during the early 2000s. Although the releases are a few years apart, they have consistently released solid material. And I really hope they keep producing quality folk metal.

A really great Swedish band – one of my favourites. The main part of the music is power metal, although the singer has a much darker voice than the traditional power metal singer. On later albums like Armod where they sing in Swedish and the lyrics are about folklore, it really catches the folk part of folk metal.

For me, Korpiklaani has all you want from a folk metal band. A lot of focus on the melodies and utilising folk instruments in a great way. The band have released a lot of music during their career, but for me they really hit it spot on with their latest album Noita.

An amazing band that just keep getting better. Although probably more of a melodic death metal band, they do have a sound that really seems to speak to a lot of folk metal fans. They utilise keyboards in an exceptional way to still get that folky feel. In my opinion this band has made some of the best songs during their later years.