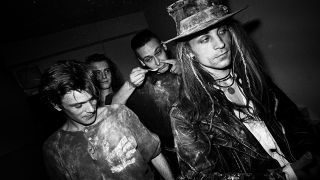 For a band that have only ever released a handful of studio albums, Fields Of The Nephilim have proved to be hugely influential since their arrival on the music scene in the mid-80s.

While the goth world was two-stepping their way through the shimmering sounds of The Sisters Of Mercy’s First And Last And Always and Hyæna by Siouxsie And The Banshees, Fields Of The Nephilim introduced themselves with the dark and menacing four track Burning The Fields EP.

Saxophonist Gary Wisker would soon depart the core group, with the band going on to release three studio albums with their classic lineup of vocalist Carl McCoy, bassist Tony Pettitt, guitarists Paul Wright and Peter Yates, and drummer Nod Wright in the shape of 1987’s Dawnrazor 1988’s The Nephilim and Elizium in 1990.

Following the launch of their 1991 live album Earth Inferno, McCoy walked away, with the remaining members hooking up with vocalist Andy Delaney to form Rubicon – releasing What Starts, Ends in 1992 and Room 101 in 1995.

McCoy, meanwhile, started his new outfit The Nefilim, launching the Zoon album in 1996 which carried more of sharper, metal edge than his previous material. However, that particular project wasn’t to last, with McCoy subsequently reanimating the Fields Of The Nephilim name for their 2005 record Mourning Sun – albeit with a mysterious new lineup.

Aside from the Ceremonies live album in 2012 and the single Prophecy in 2016, all has been quiet from Fields Of The Nephilim when it comes to something new, but they continue to play sporadic shows in the UK and Europe.

This, then, is a pick of the best songs from Fields Of The Nephilim, with a few honourable mentions just for good measure.

The Neph introduced themselves with their debut EP Burning The Fields in 1985 with four excellent songs: Back In Gehenna, Laura, Darkcell and Trees Come Down. While Gary Wisker's sax on Darkcell elevated the track, it's Trees Come Down which has remained a firm favourite among fans.

A rhythmic beat accompanied by McCoy’s mournful vocals kick things off – but then, at the four-minute mark, Nod Wright’s drumming really moves up a  gear and helps push the track to new heights. The band would later drop the opening section for their live shows and even revisit it on One More Nightmare – an much heavier version with added effects. As good as that version is, it doesn’t match the drab beauty of the original.

The band’s second album The Nephilim was a departure in vibe from debut offering Dawnrazor. Gone were the Ennio Morricone overtones, with Fields Of The Nephilim lacing the record with samples from Jean-Jacques Annaud’s 1986 film The Name Of The Rose. Love Under The Will is just one standout track on the record and carries a distinctly eldritch feel, with Paul Wright’s shimmering guitar adding texture to Peter Yates’ memorable riffs. It’s all underpinned by Tony Pettitt’s excellent bass work, while McCoy’s vocals drive this one deep into the cracks and hollows.

The Watchman follows The Nephilim opener Endemoniada - making this a quite brilliant one-two punch. The Watchman slowly creeps up on you with some atmospheric finger-picking from Paul Wright with brother Nod soon getting in on the act with understated drum fills. Then, it all kicks off into a maelstrom of driving goth goodness, with everyone coming together to create one of the band’s best-loved tracks and a live favourite.

The original track kicks off Fields Of The Nephilim’s masterwork Elizium – along with the eerie (Dead But Dreaming) but it’s the single release which edges out the album opener. The difference is slight – an instrumental addition in the second half of the song – but it makes all the difference. A brilliant track which was released prior to the launch of Elizium in 1990 giving us a small taste of what to expect from what turned out to be The Neph's finest album... in my opinion, of course!

Perhaps Fields Of The Nephilim’s best-known song thanks to it reaching no.28 in the official UK single charts after its release in the summer of 1988. Moonchild perfectly encapsulates this era of the band: it has some nifty guitar work, great bass lines from Tony Pettitt, Nod’s stellar drumming and McCoy’s distinctive vocals. Lower me down… it’s a classic.

A bit of cheating going on here as I’ve taken the liberty of rolling Wail Of Sumer/And There Will Your Heart Be Also into one – but they are meant to be listened to as a pair and their combined might makes this one of The Neph’s most memorable moments.

Closing out Elizium, the tracks take on some sort of Pink Floyd life of their own, washing over the listener in waves of sonic bliss. The Pink Floyd comparisons are perhaps apt as the album was partially recorded on David Gilmour’s Astoria houseboat, was produced by Andy Jackson, while longtime Floyd collaborator Jon Carin provided the keyboards.

No list of the very best Fields Of The Nephilim tracks would be complete without the title track from their debut album. Its slow, menacing pace, complete with creepy otherworldly noises and stellar musicianship from the band take this to another level. Experiencing this live back in the day was always a highlight. The Psychovikings would gather to build human towers in the crowd, while the rest would throw their arms skywards during the chorus amid billowing dry ice. Simply magical.

Released as a standalone single in the spring on 1989, Psychonaut gave a flavour of what direction the Nephilim were heading in. To call Psychonaut epic would be an understatement. Clocking in at almost 10 minutes, it’s a sprawling beast of a track which drives along thanks to a galloping bassline from Tony Pettitt.

The opening section is magnificent, but it soon morphs into something different, with just the drums, bass and keyboards cutting through the ethereal depths. McCoy then joins in the ceremony, urging us to “gather hallucinations from our private minds” and “witness the reincarnation of the sun.” It’s spellbinding stuff.

The sound further expands towards the end before racing for home. This marked a new chapter for the Nephilim and it still stands up 31 years later. For the record, there are three other versions: Lib I, Lib II and Lib IV which are all well worth a listen, albeit not quite as mighty as this one. Check out the video for Lib I below.

Another epic track that also weighs in at just under the 10 minute mark. Last Exit Of The Lost is a mournful head trip with Pettitt’s plodding bass setting the scene, while the feedback from Peter Yates’ guitar throbs away gently in the background. Last Exit slowly builds its swirling Lovecraftian atmosphere before all hell breaks loose as the tracks picks up the pace to its thrilling finale.

Fields Of The Nephilim released several versions of their greatest ever track. The first, Sumerland (What Dreams May Come), appeared on Elizium and the single Sumerland (Dreamed Version) soon followed. There was the stellar live cut that appeared on their Earth Inferno album along with a shortened video version (see below).

The pick of the bunch though has to be the Dreamed Version, which makes several changes from the already excellent album number. Nod’s drumming throughout in particular is magnificent – check out the Earth Inferno version if you don’t believe me – and the track ebbs and flows towards its atmospheric climax. Fields Of The Nephilim at their very best.

Now time for some honourable mentions: She and New Gold Dawn from 2005 comeback album Mourning Sun; Chord Of Souls from The Nephilim; Preacher Man from Dawnrazor; and Blue Water – the stand alone single following the release of Fields Of The Nephilim's debut album.