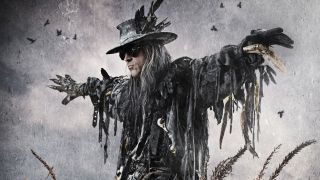 Nurtured on a diet of film soundtracks, psychedelia and Pink Floyd, these gothic cowboys emerged from the post-punk scene with one thing on their mind: to experiment.

Gothic rock and prog might not seem to have much in common, but dig deeper and there are similarities. For starters, they both refuse to stick to standard song structures, often have a penchant for evocative atmospheres and a passion for cerebral lyrical concepts. Yet Fields Of The Nephilim’s story starts not in Highgate Cemetery, but in the Hertfordshire town of Hitchin in the early 1980s.

“We were all trying to make experimental music – even as separate individuals,” remembers singer Carl McCoy as he relaxes in a hotel lounge ahead of the band’s sold-out show at the Bram Stoker International Film Festival in Whitby. “When we got together, we made a good sound.”

And that sound was quite unlike anything Hitchin, or indeed anywhere else, had heard. Along with bassist Tony Pettitt, guitarist Paul Wright and his drumming brother Nod, they experimented with elements of The Velvet Underground, Steve Hillage, Pink Floyd and even dub, infusing them with punk attitude. “We didn’t like the standard sounds of any instruments,” McCoy says. “We’d have to mess with everything… We never wrote songs with any sort of standard structure – pre-chorus, verse, chorus. No, it didn’t really work like that!”

Despite their punk leanings, the Nephs weren’t interested in making fast and furious two-minute songs. Instead, they wanted to create atmospheric soundscapes punctuated with McCoy’s ‘gargling with gravel’ vocals (said to be the result of the singer burning his throat when he was younger). The band worked outside the box, playing with tape loops and any musical gizmos they could lay their hands on. Equipment more commonly used by surf rock bands, like the vintage ‘spring’ reverb unit and Roland Space Echo, became integral to their psychedelic-infused sound.

“We were using kit in a way that wasn’t really the textbook way,” explains Tony Pettitt, who joins McCoy on the chintz sofa. “It was a good way to use and abuse technology and effects, a bit like they did with dub reggae. They’d use the studio as an instrument and instead of getting the perfect level, they’d shove something in there, get it overdriven and all feeding back. I love that. Paul used to have one of those WEM Copicat Tape Echo thingies, like Hank Marvin used to use… but he certainly didn’t use it like that!”

The more they played, the more they experimented and the more Fields Of The Nephilim’s sound developed. Although their debut EP, 1985’s Burning The Fields, was a hint of things to come, and jokingly earned them the tag ‘spaghetti metal’, their sound really started to evolve on 1987’s Dawnrazor.

Originally released through Beggars Banquet’s Situation Two sub-label, it opened with a reverb-heavy rendition of Ennio Morricone’s The Harmonica Man from Once Upon A Time In The West. The track was enriched with Pettitt’s throbbing basslines, Paul Wright’s spacey noodling and the addition of a second guitarist, Peter Yates. As the song bounced into the dark rock of Slow Kill, it was clear that the band were offering something different from the two-step gothic rock imitators that were becoming commonplace.

McCoy used his voice not only as a musical instrument, but also as an artistic one that painted strange landscapes scattered with Biblical, Lovecraftian and occult references – all inspired by his religious upbringing and ongoing interest in all things mystical. These landscapes would be transferred onto paper to help create their eye-catching artwork under the banner of his design studio, Sheerfaith.

“If we weren’t making music, we were watching films,” admits Pettitt, continuing the theme between sound and vision. “The Spaghetti Western thing was something we loved.”

McCoy adds: “I loved [Tobe Hooper & Wayne Bell’s] original soundtrack to The Texas Chain Saw Massacre, which was a load of clattering and noise – that was my favourite soundtrack ever. I liked some of the Tangerine Dream soundtracks, such as The Keep, as well.”

Inspired by what he heard, McCoy built up his own collection of weird noises that he went on to incorporate into the band’s lush soundscapes.

But it wasn’t just their sound that was inspired by cinema – their look was too. McCoy favoured coloured contact lenses to give him an other-worldly appearance and, along with the rest of the band, wore aged leather togs with cowboy hats and duster coats, mostly sourced from charity shops. They generously dusted themselves with bags of Home Pride flour for a weathered appearance, but accessorising with baking ingredients proved to be an occupational hazard. Their tour diaries are strewn with tales of over-zealous officials questioning them about bags of “suspicious white powder” in their luggage.

Their strong image, gothic lyrics and dark sounds saw them placed into the newly named goth movement, which was defined by its darkly dramatic music and black clothing. Support slots with goth-friendly bands such as Christian Death, Balaam And The Angel and New Model Army helped earn them a substantial and extremely loyal fanbase, with their live shows quickly becoming a play of dry ice, human pyramids and sticky dough.

Yet not everyone got them. Many critics considered the Nephs to be a joke band, while others accused them of ripping-off The Sisters Of Mercy. However, there was far more to the Hertfordshire five-piece than cowboy hats and flour, as their second album The Nephilim demonstrated. Its trance-like, brooding atmospheres helped it ascend to No.14 on the UK Album Chart. It even spawned their Top 30 hit Moonchild, still the most commercial-sounding song they’ve written. “It’s almost got a middle eight, which is something we never really did!” says Pettitt.

In reality, The Nephilim was only painting part of the picture and their best was yet to come. Intermediate single Psychonaut was recorded by candlelight over a three-week period at Real World, and offered a taste of the rich soundscapes that would soon emerge on their third long player Elizium.

At the time of the album’s release, the charts were split between hard rock, rave and dull pop ballads. Goth was creeping away from the British mainstream and into the crypts where it would remain for another decade, attracting only those who dared to cross its shadowy threshold. Even its leading lights, The Cult and The Sisters Of Mercy, were embracing a more solid rock sound, although The Cure had dabbled with prog on 1989’s psychedelic Disintegration. Now Fields Of The Nephilim were ready to delve deeper and unearth something so enormous, so conceptual, it could only be classed as prog.

“Elizium was a big jump forward from their previous albums,” remembers co-producer and Pink Floyd engineer Andy Jackson. “They’d gone for more of a soundscape kind of approach and it made sense why they wanted to get involved with me. It was big and cinematic, with lots of space… That was something they’d already formulated themselves and it was instinctive for me to do because I’d already done it.”

Originally written as one continuous song and released on Beggars Banquet in 1990, Elizium was partly recorded at David Gilmour’s houseboat studio Astoria, and it explored recurrent themes of life, death and resurrection. One movement features samples of occultist Aleister Crowley, while their Floydian influences extended to them borrowing some of Gilmour’s equipment during the recording.

“I have pretty good memories of Elizium,” McCoy says. “It was a weird time for the band – we were quite frazzled. We’d done a lot of touring and it was actually the last album we made with that line-up. I think the sense of that was pretty strong, that it wasn’t going to go much further after that. Looking back, I think it was a necessary album to make at the time, although I did find it hard work when we went out to play it live. It was so slow-moving, it was weird to perform, but some of the atmospherics and the vibes we got pretty nailed.”

He adds: “The way we wrote was never the same twice. At times I had my own language, but the essence of what was underlying has always been the same. It’s come from me; it’s a subconscious effort and sometimes the music is a conduit for that.”

Would he class the band’s work as conceptual? “I suppose, as an ever-evolving tale,” he says. “The more I move on, the more I understand it and the more it unfolds. It’s still going and that’s why I’m still doing it.”

Elizium came encased in dreamy artwork created by Sheerfaith and v23 graphic designer Chris Bigg. The back cover continued the mystical concept with one of Sheerfaith’s still-life pieces titled Dead But Dreaming, inspired by the kiss of death from the Kabbalah.

For Katatonia guitarist Anders Nyström, the album opened up a new world of music. “Elizium was lush, but it was hard to categorise because it was so alternative in its approach,” he says. “The music was a huge soundscape of atmosphere and emotions that went beyond what people referred to as gothic rock. At the time there were no bands you could compare them to. That’s what made them the godfathers of that progressive, gothic style and I haven’t come across any other album that has made the same lasting impression on me since.”

Fields Of The Nephilim split up a year after the release of Elizium. Carl McCoy dabbled with gothic metal under the banner of Nefilim, while his remaining bandmates formed the alternative rock band Rubicon. Subsequent Nephs offshoots have included Last Rites, NFD and, more recently, prog goths The Eden House.

But anyone thinking Fields Of The Nephilim are dead and buried is much mistaken. McCoy revived the band with a more fluid line-up in 2000, and released their fourth studio album Mourning Sun in 2005, followed by the lavish live package Ceromonies three years ago. Now, with Tony Pettitt back on bass, the band recently celebrated their 30th anniversary and are currently recording new material in the studio. One thing’s for sure: they’ve come a long way from Hitchin.