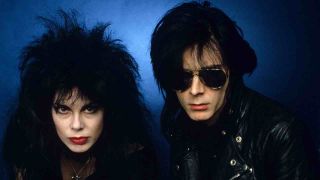 As a teenager growing up in Yorkshire in the 1980s, Paradise Lost guitarist Gregor Mackintosh was there at goth’s ground zero.

“We're from Halifax, and it was happening in Leeds and Bradford,” says Mackintosh. “I was into punky stuff when I was really young, then I started to delve into the goth stuff – Siouxise And The Banshees, Bauhaus and especially The Sisters Of Mercy.”

Of all the bands who can lay claim to being the Godfathers - or Godmothers – Of Goth, the Sisters have more of shout than most. They emerged from the shadows of Leeds at the very end of the 70s and spent the next decade helping shape the sound and look of the goth scene – through famously contrary mainman Andrew Eldritch has subsequently washed his hands of the whole thing.

There has always been a goth element to Paradise Lost’s music, to the point where they even titled their second album Gothic back in 1991. But their upcoming 16th album Obsidian brings those influences front and centre – close your eyes at certain points and you could be in legendary sticky-floored Leeds club Adam And Eves in the 80s.

Who better to pick the Top 10 Sisters Of Mercy songs than the Dark Lord of Goth Metal, then? No one. Take it away, Greg…

The first song on the first album, and one of the most archetypal goth songs I’ve ever heard. It’s pure goth – the guitar lines, the bass lines, the vocals, the moodiness.

Every Sisters era had different people who brought something to what they were doing  – Gary Marx, Wayne Hussey, Patricia Morrison, Tim Bricheno. It was the collaboration of these people with Eldritch that made it special.

It's so overblown – it’s a stadium rock song, basically, but it keeps its goth element because of Eldritch's voice. To a lot of people today it probably sounds ludicrous, but it came along at the right time. That’s why we incorporated it into our music when we were writing the Gothic album in 1990 – we liked the pomposity, the overblown-ness of it. The Sisters ride that line between pomposity and cool, and they mostly manage to stay the right side of it.

It’s one of their earlier songs. For me, it was all about the bass line. And also the original version had all these effects on it which I hadn't really heard before – reverse reverbs and things like that. It made it sound kind of otherworldly and spacey - it was like this cross between new wave and Hawkwind.

I'm going to have to pick the 1992 version over the original [released in 1983], because [Israeli vocalist] Ofra Haza was so amazing on it.

I went on holiday when I was kid to some Lanzarote-type island, and there was a group playing Syrian music, and it really blew my mind: ‘This sounds awesome.’ It stuck with me, and when I heard Ofra Haza blending into the Sisters' music I thought, ‘That makes absolute perfect sense.’ To hear her in a sticky floored club doing these Eastern melodies, it was, like, 'Wow.'

The bass was so important in goth in the 80s, and that's why I've brought it back on two or three tracks on this new Paradise Lost record. It was all about the bass and drums - they were what drove the track. The guitars were just the sprinkle on top for texture and atmosphere - sometimes you couldn't even discern what they were playing. Lucretia is pretty much all bass and drums.

It's one of the fastest Sisters songs, I love the double-time snare on it – it sounded almost like a New Model Army song to my ear at the time. And I liked the delay on the voice: ‘No… no… no… no… no…’ We've actually ripped that off a few times over the years. I actually wanted to cover No Time To Cry or Alice, but they were too obvious, so we did [1984 single] Walk Away instead.

We toured with the Sisters in 1998 or 1999, and he actually upped his game on that tour. Initially he was going out wearing white T-shirt and white trousers, the full ‘I’m not a goth thing’, but he got more goth as the tour went on. Not that he'd ever admit it.

When I initially started to listen to the Sisters, I used to think it was all doom and gloom, and I didn't realise how clever Eldritch’s lyrics were. It was Vision Thing that made me realise how clever it was, because it's got all these references to political things and societal things. It's very clever word play.

Musically, it’s quite direct by their standards – almost metal. I was delving a lot more into the metal stuff by then, and this really hit me as a fantastic goth-metal crossover.

Again, it’s just the sheer pomposity of it. It's got the kind of crescendos you get in Wagner, mixed the kind of goth music that's just the right side of ludicrous, all with this stadium rock production. It's a blend you'd think would be absolutely ridiculous, but it made you go on the dancefloor even if you weren't a dancer.

The only reason Marian only wasn't number one on this list is because it's not quite been constantly stuck in my head for the last 30 years. It's pure misery, that’s why I love it – if’s one of those songs you put on and go, ‘Wow, this is so grim.’ It's suicide through music. It's not pop at all - it's the other, really goth side of the Sisters. I actually think they could have done it more on later records.

It's a goth dance song, but it's the absolute simplicity of it that works. It's the same notes all the way through, pretty much. It's almost a three-note song, and to pull that off is incredible.

It takes me back to those clubs, like Adam And Eve's, sitting there in the gloom and the smoke, in your corner of the club with your tribe, looking across at the goths, who were looking across at the metallers, smelling that patchouli and the sticky floor. Alice would come on and you'd want to get up and have a dance, but you'd be clipped around the ear-hole by a slightly older punk if you did.

For me, it's ahead of anything Bauhaus did, it's ahead of Christian Death, it's ahead of A Forest by The Cure, it just pips my favourite Sioxusise And The Banshees song Israel. I would say it's the number one goth song full-stop

Paradise Lost’s new album Obsidian is released on May 15