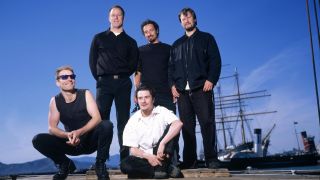 Faith No More's sixth, and final, album was released this week in 1997. Ahead of its release we joined the band in their hometown to get the inside story on what would turn out to be their swansong.

Within a labyrinthine rehearsal complex is a decaying area of San Francisco, four men in black are running through a new set of songs. A fifth man, attired with equal sobriety, sits on the floor, occasionally offering his colleagues suggestions. There’s much work to be done so small talk is kept to a minimum, even though this is the first time the five have been together for months. But then, many would be surprised to find them in the same room at all. Because at the start of 1997, you wouldn’t have bet on Faith No More still being around by now.

It’s been two years since Faith No More released their fifth album King For A Day… Fool For A Lifetime - a disparate, frustrated and hate-filled album which was recorded in the wake of original guitarist Jim Martin’s departure. It failed to realise the commercial impact of it’s predecessors, 1989’s The Real Thing and 1992’s Angel Dust, and frankly, the band didn’t seem to give a shit.

But Faith No More return with three UK live dates this month, and a new album, the cheekily titled Album of the Year, on June 9. Question marks still hang over the band’s unity though: given their other commitments and the fact that it was rare for more than two members to be present in the studio at the same time while Album of the Year was being recorded. These are hardly dispelled when photographer Mark Leialoha’s asks Patton the identity of the band’s latest guitarist and he replies, “Some guy called John” (That’ll be John Hudson, formerly of Systems Collapse and a long-time friend of Bill Gould).

Our first question for Faith No More when the finish rehearsing is simple: why are they still together?

“It takes a lot of work, but the bottom line is that if we weren’t totally comitted to making music as Faith No More, we wouldn’t still be here today,” replies Bill Gould. “It’s not like we don’t have anything else to do.”

“Our new songs were good, so we wanted to keep going,” says Mike Bordin. “While all the rumours were flying around, we were already back in the studio.”

But it did look as is you were all more interested in your solo projects than this band.

“Everybody needs the release of doing something different,” sighs Gould. “and if you try to keep people from doing their own thing our group would be a ball of frustration and wouldn’t function. It really is the only way we can operate.”

With everyone so preoccupied with their own things, did you ever wonder whether Faith No More was a going concern?

“Absolutely,” smirks Patton. “But that happens every time we do a record. Every record has it’s own little melodramas and paranoias.”

His band mates nod in agreement.

“We don’t talk much about our other bands, so it’s always a guessing game to see what everyone else is up to,” admits Roddy. “Personally, I’d just as soon not tell the others what I’m doing. But then I feel maybe I should be checking in with them every now and again. I think FNM is always at the back of our minds as an unfinished project.”

In truth, there is no logic to FNM’s continued existence other than the pure drive of five musicians to keep making great music together. And they have made some truly great music.

It’s impossible to overstate just how cool were at the turn of the decade: Their eclecticism and fuck-you exuberance made them stand out like a beacon in a pre-grunge sea of insipid, poodle-haired ponces. With their amalgam of rapped vocals, hip hop rhythms, cocktail lounge keyboards and sheet metal riffing, they made rock credible again. Their survival is all the more surprising when you consider the fate of their peers- Soundgarden (defunct), Jane’s Addiction (deceased) and the Red Hot Chili Peppers (AWOL).

“Ironic, isn’t it, since we’re supposed to be the volatile ones?” Patton laughs. “Most rock bands are portrayed as little teams - us against the world. Which is complete bullshit and definitely not what we’re about. We’re perfectly happy to talk about the problems we have with one another. A big part of being in a band is sticking up for what you believe in. And since we’re honest with each other, we do fight a lot.”

“When we started this band we were best friends, but it’s way beyond that now,” says Bill. “It’d be stupid for us to hand out together now just for the sake of it.”

But is it still just as much fun?

“It’s a different thing now,” Roddy admits. “There’s nothing like the excitement of going to towns for the first time with no-one knowing what to expect. When you get comfortable, it’s very easy to forget that going out on a limb is really important.”

The coolest thing about FNM was that they always seemed to do whatever the fuck they wanted; whether that be covering The Commodores’ sickly soul classic Easy, or releasing techno remixes long before it became trendy. Yet the band themselves reckon that this very open-mindedness has hurt them.

“If people people didn’t like King For A Day…, it was because they didn’t like it for Faith No More,” says Bill. “We went beyond people’s expectations.”

But I thought that Faith No More’s defining feature was that the fan’s never knew what to expect?

“Oh, we have our limitations,” argues Bill. “I’d love us to do a straight up soul ballads record, but it’d fail so badly.”

What happened to the artistic view that selling records isn’t the be-all and end-all?

“It’s when you have to pay the rent,” snorts Bill. “We have made records for ourselves, but it’s hurt us. Sometimes you fight against stereotyping so much that you end up losing your perspective.”

“Shit, you’ve got to learn something in 14 years!” Puffy laughs. “Stick your dick in a light socket once and you’re not going to do it again in a hurry.”

It might seem weird for a band as unpredictable as FNM to be talking about practicalities of their career, but their unflinching honesty is another cool thing about them. Everyone in the band readily admits to having regrets over mistakes they’ve made in the past. But no one can understand the relative failure of King For A Day...

“It was confusing, because it felt so natural for us,” Puffy sighs. “Maybe we are a little weird. But I think the record company is actually excited about this record. They definitely didn’t get Angel Dust or King For A Day.”

“When you start off playing in a garage, you don’t know anything about the record industry,” adds Bill Gould. “Then you try to learn stuff so that you can use it to your advantage. But you end at the point where you go, ‘If I keep thinking about this I’m going to go fucking insane so you stop and say, ‘I don’t give a fuck.’ Thats the stage I’m at now.”

But you’ve gone on record as saying that you reckon that the musical climate in America might be more suited to FNM now.

“If this record had come out last year it’d probably have been ignored-but now, who the fuck knows?” Bill sighs. “It’s cool that we can fit in alongside bands like Korn, but our fans are kinda strange. I don’t know who buys our records or why they do, we’re just grateful that people still give a shit.”

“I think that we’ve always been a freaky bunch,” Roddy considers. “I don’t see the general public ever embracing FNM as a trendy commodity.”

If being different has not always helped FNM’s cause, it’s unfair to suggest that their appeal has become more selective. It’s just that post Nirvana the stakes have been raised dramatically for alternative rock groups.

FNM’s breakthrough record, The Real Thing sold a million copies, and while the group’s sales since have consistently hovered around that figure, they’ve not thad the same dizzying spell in the limelight.

Which is where Albums Of The Year comes in. The main impetus behind the record came from Bill Gould, who was twiddling his thumbs in San Francisco longer than the others. It wasn’t an easy album to make due to the neccessity of integrating a new guitarist into the fold- in addition to the logistical difficulties involved. At least one band member laughs quietly when asked whether they turned up to the studio to find parts they didn’t like added to the songs.

“Sometimes the majority rules- but majority decisions can be wishy-washy, so it can come down to how hard certain people push,” Roddy smiles.

The main difficulties arose from the need to keep the band’s sound moving forward.

“It’s very hard now to do something which surprises any of us,” Bill admits. “Doing the same thing over and over in music get rewarded a lot, but we take pride in standing aside from that and being different.”

Which is where we could have left Faith No More - soberly reflecting on the difficulties of being one of the most maverick bands of the ‘90s- were it not for the fact that they’re filming the video for Last Cup Of Sorrow, Album Of The Year’s second single, the very next day. It’s here that we’ll see just how much of a hoot life on Planet FNM can still be.

This is where Roddy Bottum will dress up as a sailor, Bill Gould will wear an outrageous hotel doorman’s uniform, and Mike Patton will get to sweep a famous actress off her feet. She’s Jennifer Jason Leigh, star of Single White Female and Backdraft and now a Faith No More promo vid. As Patton carries her across a car park beneath the Golden Gate Bridge, Mike Bordin re-emphasises his band’s hunger for the levels of success they enjoyed with The Real Thing.

“But next time around,” he smiles, “I’d like to think we could direct the chaos a little better.”