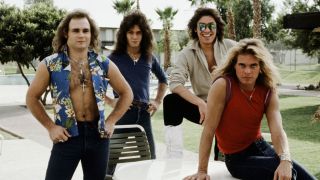 Let’s lay our cards out on the table right now. Van Halen’s 1978 self-titled debut album is one of the greatest opening salvos in all of rock history, maybe even since the invention of electricity itself. It ushered in the age of the shredder and introduced us to the most razzle-dazzle frontman rock’n’roll had ever seen. Released in February 1978, it scoffed at punk, left disco in the dust, and gave birth to a whole new era of hardcore rock’n’roll excess.

In eleven eventful tracks, Eddie Van Halen and his gang of acrobatic neon savages redefined the parameters of rock and it made bigger, louder, and more exciting than ever before. Some would say the follow-up, Van Halen II, is the band’s masterstroke. Well, fuck those people. There’s idiots everywhere, man. Some people even prefer Van Hagar. But we are here to worship at Van Halen’s holiest of temples. Here’s the whole thing, least-best to most-mindblowing.

I mean, Jesus Christ with this song. A cover of John Brinn’s raunchy 50’s era blues-jammer, this lightweight piffle exists mostly so that Diamond Dave can show off his propensity for gibberish. 80’s era hard rock bands were not known for their deep roots, so this at least showed the band knew what was up. But it’s eminently skippable, and really the only potential clunker in the bunch.

Van Halen’s early albums still sound so raw, alive and vital that it’s easy to forget that they were released during the era of FM rock giants/dinosaurs like Boston, Fleetwood Mac and The Who. Glam metal didn’t even exist yet and commercial accessibility was all the rage, which is clearly evident on this one, an otherwise full-on rager that goes limp on a radio-baiting chorus so saccharine it sounds like something Angel might’ve concocted.

Track placement was everything in the era of the rock album, and there’s a reason this one is buried at the tail-end of what is otherwise one of the greatest A-sides of the 70’s. I’m the One just sounds underwritten, like the only part they had when they hit the studio was the ‘77 punk thing they do on the bridge, so Eddie just filled the rest of the song with five zillion notes. I’m not even complaining really, they’re great notes, but they could’ve let this one bake in the oven a little longer.

Again, the tracklist spoke volumes in the 70’s. On Fire is the last song on the record and it’s probably the least catchy, overpowered by Michael Anthony’s incessant boinging bass and a non-chorus that’s just Dave shrieking the title. But on the plus side, I think this song invented Manowar.

It’s a good song. It just slower and breezier than the rest. This album is about sex and hammers and cops busting teenage house parties and heartless creeps making girls cry, and this sounds like something you’d hear at a picnic.

Pretty ballsy to drop in a two-minute guitar solo as the second track on your major-label debut album, but Eddie Van Halen wanted you to KNOW, man. And once you heard this testicle-dropping flurry of fleet-fingered notes, you fucking well knew, Jack. This track launched a million guitar players. None of them can play like this. That being said, we’re not all guitar players, man. Let’s get on with it already.

This is the album’s underrated hidden gem, a one-off slice of Dystopian sci-fi that finds ol’ Dave slipping out of his usual schticky hornball routine and stalking the post-apocalyptic alleys of a dead city while his band carves out a surprisingly dark swathe of simmering tech-metal. Bonus: It’s not punk. More bonus: “Nobody rules these streets at night but me” might be the most macho, chest-thumping lyric in all of 70’s hard rock-dom.

You Really Got Me

Best Kinks cover ever, and a remarkable twist on 60’s rock n’ roll. No complaints.

Statistically speaking, the first song on the second side of the album is generally the most popular. I’m not sure how that even works, but it’s true. And on a lesser album, that would certainly be the case here. Jamie’s Crying is one of the band’s all-time best, a swaggering, mean-spirited pop-metal gem full of irresistible hooks and a soaring chorus. It’s not the best song on the album, but it’s better than the best song on almost every other album they ever did. Bonus: Roth reportedly banged down half a bottle of whiskey before singing this one, to get a nice husky sound. It worked.

Runnin’ With the Devil

Everything you know (or think you know) about Van Halen is encapsulated in this song. If a space alien dropped into your backyard and you asked him about Van Halen, he’d probably do David Lee Roth’s yow-wow intro howl. As iconic as it gets, Runnin’ covers all the arena-rock bases, from Eddie’s spectacular shredding to the myth-making lyrics about life on the endless highway. It’s only their first album, but on this song, they already sounded like gods.

This is the one that ushered in the next decade of rock. Everything that came after, the endless torrent of 80’s flash metal, the glam and glitter and ant-snorting and overdosing and assless leather chaps and misspelled words and guitar solos that sound like exploding bombs and throngs of long-haired punks puking beer in parking lots, it all sprang from this effortlessly charismatic ode to David Lee Roth’s penis. No one can touch this song for sheer ferocity, not even prime-time GN’R. It is the sound of the greatest rock’n’roll band in the world operating at full capacity. A complete stunner then, now, and forever. Amen.