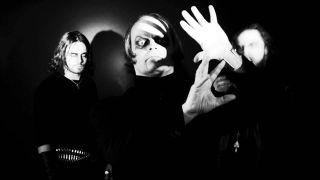 Black metal might have had its moment in the moonlight back in the ‘90s, but the scene has since spread across Scandinavia into mainland Europe and beyond, with different sounds and sects popping up all over the place. From the New Wave Of Icelandic Black Metal to the blackgaze movement straddling both sides of The Pond, this once lo-fi form of extremity has morphed into something much bigger and bolder.

“The chameleon. The hybrid. The ultimate proof that black metal doesn’t have to be bound within musical limits. Stellar atmospheric black metal, fractious, poisonous and harsh industrial, lulling trip-hop, old school ravage – Blut Aus Nord change their face on almost every record and deliver high-end music with authenticity, inspiration and ability. 777 – Cosmosophy is the most thrilling, emotional and devouring extreme metal album ever released in France. Period.”

“With their approach of always pushing boundaries, Celtic Frost are not only co-founders of the genre, but also innovators and visionaries. The music is defined by Tom G. Warrior’s incredible guitar sound and his amazing riffs, but also his great voice and the profound lyrics of him and Martin Ain.”

“Deathspell Omega is the perfect musical representation of Satan. It’s multi-layered, intensely stirring, majestic, epochal and orthodox – with aesthetic intellectualism at its very core – which form the audial and conceptual levels of this mysterious French formation. Si Monvmentvm Reqvires, Circvmspice is one of the most glorious reverences to the One who has many names.”

“Its hard to pick one of the many excellent bands from the New Wave of Icelandic Black Metal, but Naðra have the perfect synergy of power, agony and melody. Örlygur’s voice embodies the horror of living on that frozen rock and they are the only black metal band (I know of) where solos don’t sound like shit and actually make the music darker.”

“Regarde Les Hommes Tomber have managed to create their own, very imposing style, that is difficult to compare to others. Black metal paired with post-metal and sludge; always driving, crushing, captivating. Atypical song structures, coupled with the great French theatricality that unfolds more and more with each listen.”

“Only the first three albums of Samael can really be called black metal, but the sound is totally unique; full of great guitar riffs, and an overall morbid, evil atmosphere creating its own cold world. Even though the band developed into different directions they still produce great albums.”

The Great Old Ones

“The rather young formation from France manages to create a gloomy and, most of the time, dense atmosphere throughout their works. They combine both ambient-black with doom and add some shoegaze on top. Never too monotonous and not at all catchy. And H.P. Lovecraft!”

The Ruins Of Beverast

“They’re definitely one of the most important German black metal bands of today. They perfectly understand how to mix sinister doom soundscapes with hypnotic black metal. Infusing shamanic chants at one point to lull you in, only to disturb you with frightening invocations a second later. A symphonic corruption.”

“Originally known as Stigma Diabolicum, they changed their name because using Latin was becoming too mainstream. That was in 1990 mind you! As the inventor of black metal tremolo riffing, Snorre W. Ruch just had to be on this list. The riffs are untouchable and the industrial sounds as cold as Fimbulwinter.”

“With simple means, Urfaust create an incredible mood that is oppressively depressive and casts a spell over you. Sluggish and rattling, it reverberates with sensationally original vocals that have absolute recognition value. With their music, Urfaust have created a new branch in metal and remain unmatched therein.”

ColdCell’s new album Those is out now and available to order from Amazon. Listen to it in full below.