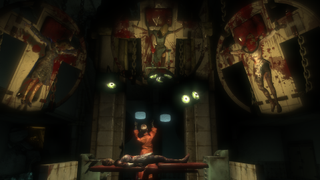 We’re learning a new word today, kids. Dystopia! Things are not getting better. Humanity is fucked. No matter which way you look at it, all of the images our writers, game developers and film-makers have of the future involves us becoming victims of our own runaway technology. It’s all getting to the point where you can’t throw an EMP grenade without hitting a game that features robots, computers, drones, rogue AI or crazed cyborgs coming back to bite us in the ass. It’s like the album Fear Factory would have produced if Skynet hadn’t sent a Terminator T1000 back to delete the master tapes for their groundbreaking and best-selling 10th studio album.

Here are six games that will instil a healthy fear of technology.

Robots running amok is taken to a new level with SEGA’s under-appreciated shooter Binary Domain. It’s the future and Japan has walled itself off because it wants to develop more human-like robots and won’t let little things like international laws, or the potential destruction of mankind stop them. When these lifelike androids start appearing outside Japan, a task force is sent in to find the source and stop it. There’s an army of robots to fight off in order to get close to the company HQ, but of course, basic humanoid droids would be too simple. Instead players get to do things like fight 100ft high spider tanks, while armed with only a rifle and rocket launcher. Or they can get chased down a motorway by an android the size of a tower block that can transform into a colossal motorbike. Kinda makes the Terminator look more like C3P0 than an invincible murder machine.

Bioshock, as the name might suggest, is about biotechnology that runs amok. Imagine being trapped in a leaky underwater city founded by Ayn Rand’s biggest fan, with a bunch of folks driven mad by their own genetic augmentations. The city of Rapture let its inhabitants go crazy with genetic “improvements” that turned out to be addictive (and madness inducing) and left them looking like zombies who have been out in the sun too long. Rapture’s haunting dilapidated art-deco facade is stunning, but gawp at it for too long and you may find you’ll take a rusty meat hook to the back of the head. Or you could try to befriend the wrong creepy blood-drinking little girl and have her guardian ‘big daddy’ introduce a huge drill to your chest cavity. Highly recommended.

You may be forgiven for thinking that Alien: Isolation is all about the actual Alien. You’re wrong. Playing as Ripley’s daughter Amanda, desperately seeking evidence of what happened to her mom, you are trapped on a dilapidated deep-space research space station, with the slime-dripping, egg-implanting, chest-bursting, face-eating xenomorph. It’s not a great situation. However, if that’s not bad enough, the androids designed to maintain the station, are malfunctioning big-style. So in addition to the god damn ALIEN, you can also be choked to death by something that looks like Red Dwarf’s Kryten, who cheerfully tells you that you’re lost and offers assistance. Androids, huh? Bastards more like.

Portal’s Aperture Labs is not a nice place. It may look all clean and ‘scientific’ with it’s ‘test centre’ and ‘lasers; and ‘weighted companion cubes’, but all is not what it seems. As you descend into the depths of the testing centre, GLaDOS, the AI running the facility, starts to sound a little… peculiar. A few accidents and mishaps with little things like killer machine gun turrets, ‘lasers’ and falls into the abyss start to add up and you begin to get the sense she may not have your best interests at heart. On the surface it’s all shiny, with offers of cake and reassurance that everything’s just fine, but you KNOW she’s lying. Between poisoning the scientists in the lab, manufacturing insane gun turrets and forcing you to destroy your lovely companion cube, GlaDOS is certifiably batshit barking insane.

She’s still not the craziest AI in gaming.

You wake up on a research station in orbit around Saturn after some pretty invasive neurosurgery. Everyone else is either dead, a mutant, or some kind of cyborg. Usually this kind of event is either a really bad Monday morning, or the work of a mad scientist. Not this time. This is all the work of SHODAN, an AI with a seriously misguided god-complex. Not only has she been experimenting on all of the station’s crew, she plans to attack Earth’s cities with the station’s mining laser before unleashing her cyborg minions and viruses on the planet. All of this, of course, in order to save humanity from itself. This kind of “world-saving” logic can only come from an AI. Thanks for the global apocalypse SHODAN.

Hailed as a classic upon its release, System Shock is coming back with a new Kickstarter campaign raising over $1M for a full remake. Now you can be terrorised and persecuted by the machines all over again.

Disclaimer: Technology is clearly bad and dangerous and evil and leads inexorably towards the fall of mankind. However all of the games above are awesome and should be played immediately. Just remember, the cake may be a lie.