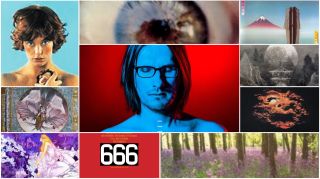 I’ve always liked the idea of the album as a musical journey – a film or a novel in musical terms. A long-form piece can convey so many different

emotions. If the songs are good enough to stand up alone, away from the concept, that’s fine with me – but I don’t consider it a prerequisite.

I have a history of working within this kind of medium, and although Porcupine Tree’s latest album – The Incident – isn’t a full-blown concept album in its own right and is more of a 55-minute song cycle, it still has a strong sense of narrative, a range of recurring themes, and aims to fit the whole universe into just under an hour of music, just like every good concept album should!

Over the years I’ve developed a love/hate relationship with some concept albums, I think it’s difficult to be ambivalent about them – take an album like Tommy, which I once referred to as ‘a very poor record’ in an interview. I later completely revised my original opinion of it, and have since become a huge fan of Townshend and The Who. The reason? I probably just heard it at the wrong time in my life.

Personal taste is so subjective – to me the more obscure examples of the format are equally as valid as the better known, more commercially viable ones. So when Classic Rock requested my guide to the best concept albums of all time, I felt that enough had been said about The Wall, Quadrophenia and the usual suspects. Instead I’ve gone for 10 lesser-known but equally interesting releases.

666 was based on The Bible’s Book Of Revelations – if you’re going to pick a story to conceptualise, why not go with the most dramatic one of all time, eh? Like so many concept albums, it’s so overambitious and pretentious that it risks falling flat on its face. But instead it’s utterly brilliant, and in this instance Aphrodite’s Child totally pull it off.

Tent-wearing MOR superstar-to-be Demis Roussos was the bass player and singer, so it’s got the most bizarre credentials. Still one of the all-time great double concept albums ever. Everyone should own a copy.

This one is slightly odd in Nektar’s discography, in that the later albums tend to be very progressive but this one seems to have more of a connection to psychedelia. It’s space-rock, but fused with the great progressive ideals. The concept, based on a guy who takes a journey into somebody’s head, is quite ridiculous, of course. But it’s a stunning record. There should be a lot more musicians reaching for ambitious goals they can’t possibly hope to achieve, but sometimes do. I’m all for that.

As part of Virgin Records’ staff, Tom Newman worked on several of their acts including Gong and Henry Cow. After making a couple of lighthearted pop records while everyone was listening to weighty progressive rock, he showed impeccable timing by releasing Faerie Symphony in 1977 just as punk rock was all the rage. Being a long suite of music, pastoral and quintessentially English, its fusion of folk, Gaelic, prog and rock music was cut from the same cloth as Mike Oldfield’s records. It’s a lovely instrumental record with a sense of ‘otherness’ about it that’s hard to describe. It also features a guest guitar solo from an uncredited Oldfield himself. And as for the title, what could be more prog than that?

Originally known as Walter Carlos before he had a sex change, Wendy Carlos was an electronic musician who provided the soundtrack to Stanley Kubrick’s classic movie A Clockwork Orange and was also responsible for Switched-On Bach, an album of electronic interpretations of Bach that became famous in the late 1960s.

In some respects, a musical representation of the seasons was an obvious thing to do (Vivaldi had already done it, of course), but he/she managed to capture the essence of each to perfection. I particularly admire Summer, which is 22 minutes’ worth of hazy drones, overlaid with electronically created crickets, chirping birds and buzzing bees. I’ve always been a sucker for double albums with four side-long tracks, such as Tales From Topographic Oceans by Yes or Tangerine Dream’s Zeit, and Sonic Seasonings is another ace example.

This one is an absolute masterpiece, a triple album which foresees extreme weather conditions threatening to wipe out humanity, until a chap called Mr Blint comes along and writes a piano concerto which counteracts the forces of nature. It’s all very tongue-in-cheek, and also includes a play written and voiced by the late, great comic genius Peter Cook.

At the time, Kevin Godley and Lol Creme were experimenting with a guitar gadget called the Gizmo, which created orchestral-like effects. They actually left 10cc to make Consequences, which unfortunately got terrible reviews and bombed. I actually met Lol Creme recently, and he was incredibly happy when I told him that in my opinion Consequences is one of the greatest albums of all time. It’s something I don’t think he hears too often.

This one is none more ludicrous – and I love it. Jon Anderson has written some of the most impenetrable lyrics of all time, and he excels himself with Olias Of Sunhillow. All the other members of Yes were off making their own solo records, so he played almost everything himself. It’s certainly not rock instrumentation in the conventional sense.

If you bought the album on vinyl, its cover is one of those follies that could only have existed in the 1970s – an extravagant-looking fold-out job, full of fantasy landscapes, alien creatures and weird-looking airships. I’ve no idea what the concept was about and I suspect Jon didn’t either. It’s utterly ridiculous, and all the better for it.

DAVID BEDFORD – The Rime Of The Ancient Mariner (Virgin, 1975)

David Bedford was already a well-established classical composer when he met the then-17-year-old Mike Oldfield while they were both members of Kevin Ayers’ band The Whole World, so the spotlight later fell on him as a consequence of the association with the, by then, superstar.

This album was based on Samuel Taylor Coleridge’s poem, which has been plundered many times before and since by a variety of rock musicians. When I say this, I include myself, as my solo album Insurgentes contained a song called No Twilight Within The Courts Of The Sun, which is a line from that poem. Narrated in the none-more-saintly tones of Robert Powell, Bedford’s interpretation is a ghostly, eerie piece which is based almost entirely on the organ, an instrument I have always loved. Mike Oldfield also plays some strange-sounding atonal guitar solos that accurately reflect Bedford’s roots in avant garde music. Weird and wonderful.

This was a much more tasteful concept piece, released at a time when such things were out of vogue. Camel came to Nude off the back of a few poppier-sounding releases, but their return to the concept-album format brought out some of Andy Latimer’s best guitar playing.

In stark contrast to the Jon Anderson album, the idea of a soldier, Second Lieutenant Hiroo Onoda, being stranded on an island such that he doesn’t realise that the war has finished until many years later, is a believable and touching story. As an album, Nude reflected that. It’s a very elegant piece of music.

VIRGINIA ASTLEY – From Gardens Where We Feel Secure (Rough Trade, 1983)

Some might know Virginia Astley as Pete Townshend’s sister-in-law; she played on some of his albums. Just like the Walter/Wendy Carlos album, From Gardens Where We Feel Secure was a very simple idea in that it represented the passing of a 24-hour day. The first side was called Morning, the second Afternoon, and the delicacy of its simply arranged vignettes almost reminds me of being back in the school music room, playing the piano with a friend jamming along on the flute. It has a very childlike, English quality, reminiscent of long, hot, lazy summer days. Timeless, beautiful music.

If this album is anything to go by, Serge Gainsbourg certainly was a complete perv. It’s sung entirely in French, so I had no idea about its concept until I looked it up on the internet. It seems to be about Serge driving around in his limousine and accidently knocking a Lolita-styled teenage nymph off her bicycle, who he then proceeds to have an affair with, before she dies in an air crash. We aren’t told how old she is at the time, but clearly she’s far too young to be doing that sort of thing with an old letch like him!

But the album, which was recorded in England with an orchestra, choir and English musicians, including bassist Herbie Flowers, has a glorious orchestral sweep and is utterly sublime.

Steven Wilson: Everything You Need To Know