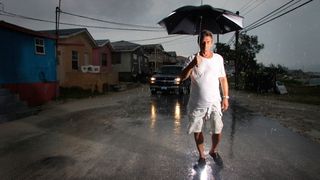 It’s fair to say that Mike Oldfield has lived quite a life. Born in Reading, he now calls the Bahamas home, having settled in Los Angeles, Ibiza, Majorca and more along the way. Father to seven children, he tells us that at 60 he’s about to become a grandfather. Professionally, he has recorded 25 albums during a career spanning more than 40 years, with his debut, the monumentally successful Tubular Bells, alone selling more than 17 million copies. He has also performed at the Olympics opening ceremony, composed music for a royal wedding, and recorded a Blue Peter theme tune. Plenty for us to talk about then, and we start with why the Bahamas is just like Berkshire.

You’re now living in the Bahamas. Is it a culture shock after the UK?

It reminds me of the UK in the 1950s. It’s in the attitudes of people: quite old-fashioned, really. I like the people, and obviously the weather is a huge factor. When I came here it felt like I’d arrived, and I’ve never wanted to leave.

Horrible! I could not wait to get out of there. I left a couple of days before my 15th birthday. I think I burnt my school uniform. I just wanted to get on with my life in music.

Did Tubular Bells become something of an albatross for you?

No. It might if it was some silly pop song, but it was a wonderful thing. At the time, I didn’t think it was that special. I always felt my real masterpiece was yet to come. I didn’t realise the most successful thing I did would be the first thing I ever did.

How much of an impact did the birth of punk have on your career?

When punk rock started I couldn’t understand why [Virgin Records] would want to do that. I do understand now. They saw that they couldn’t come up with any other artists who could do things as good as, if not better than, Tubular Bells, that was the problem. So they had to smash that image for the sake of the company credibility.

What’s the secret to having 40 years in the music industry?

Music to me is more than just a hobby or a job. You’ve got to be so into what you’re doing and obsessed, I suppose, to make it successful. You also need a bit of luck. I was lucky to bump into Richard Branson and the people that started Virgin at that time.

Probably that I’m shy. I’m not shy, I’m just not super-sociable. The other is that stupid thing that my music is New Age. It’s not.

What’s the biggest lesson you’ve learnt in your career?

Remain true to yourself and carry on aiming for that perfect piece of music.

What is your biggest vice?

I used to feel sorry for myself, but not anymore. I used to have all kinds of problems, and I was so unhappy I did a lot of psychotherapy, years of it. I did that until I got bored with it, bored of listening to myself going on and on. I’d think, “Oh, shut up will you?”. I was pronounced cured at that point. I still smoke, but then I don’t consider that a vice.

What’s the secret to a fulfilling life?

I suppose it’s starting young, working your arse off for as long as you can so you earn enough money to retire to a beautiful place. Having some children as well. They are the greatest gift we have as humans.

Very much so, although I don’t follow a specific religion. I believe in a supreme… something. I have a special word for it. I had this feeling of there being a ‘big one out there’. If you put those initials together it spells BOOT. So I believe in BOOT.

What have been the highest and lowest points of your career?

The high point would be the 2012 Olympics. Walking on stage at the opening ceremony was indescribable. I will never top that. The first low point that comes to mind is the Amarok album, the lack of recognition for that piece of music. I had such high regard for it, and so did the record company. The only reason they didn’t get behind it is because I refused to call it Tubular Bells II. If I had it would have probably been extremely successful, but it wasn’t Tubular Bells II. I couldn’t sell myself for the sake of being commercial.

What’s the best advice you’ve been given?

Get a music business lawyer – and a good one! There are so many pitfalls when you start off. You’re young and naïve, and everybody’s nice to you, especially if you’re successful. You get surrounded by sharks who think they can make money from you and you have to protect yourself. It’s awful, really. You can’t have normal friends anymore if you’re successful. A lot of people can’t take it. They go into themselves and get drunk or stoned or hide away.

I have actually done this. It’s on one of my virtual reality games, called Maestro. I put a beautiful forest in there with my gravestone. You’ll have to go and download the game from my website to see what it says.