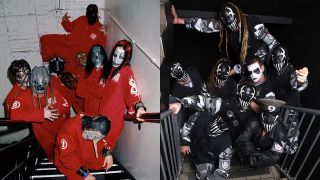 It’s September 11, 1999, and Slipknot are on top of the world. Hot off a game-changing self-titled debut album, the masked nine-piece are in Cleveland, Ohio, taking part in the enormous Livin’ La Vida Loco tour. They’re there as part of a stacked bill that also includes Coal Chamber,  Machine Head and Amen. It should have been another magnificent night of what had been a hugely successful trek.

“People came down and threw everything but rocks at us,” Slipknot singer Corey Taylor remembered of the set his band played that evening, discussing it years later at one of his solo concerts. “They hit Paul [Gray, bassist] in the face with a fucking padlock the size of my fist, while we were onstage!

“When we got done playing, we took all our shit off and went into the audience,” he continued. “There were a lot of them, but there was all nine of us, there was Machine Head and all our friends in Amen. Let’s just say, we fucking handled it right there.”

“Me and Jim [Root, guitarist] jumped offstage and took our masks off and started swinging at people at the end of one song,” Gray told Revolver. “When we were done with that set, everything came off. One of the guys in our crew got maced by the cops and arrested.”

The gig-turned-brawl was the Iowans’ first time in Cleveland: a city that happens to be the hometown of Mushroomhead, a band with whom Slipknot had more than a little in common. Both wore masks and boiler suits. Both even had a bassist that dressed up like a pig. Corey Taylor and co, however, were the newer of the two – and they were already bigger. Much bigger.

And that was the problem.

Mushroomhead released their first album in spring 1995, more than four years prior to The ‘Knot. Despite this though, the latter were an immediate breakthrough after June ‘99’s Slipknot, eclipsing the Ohio troupe in a minuscule span of time. In frustrated fans’ eyes, a very close imitation had not-so-subtly ripped off the genuine article and ridden their coattails for a quick buck, leading to the violent boiling point that was Cleveland in September 1999.

That one night was the height of the Slipknot versus Mushroomhead feud, which would go on to become one of the biggest talking points of the era. For years, loyalist fans would cling tightly to their respective favourites, while on-and-off mud-slinging consumed the rock ‘n’ roll press. Everyone else stood on the sidelines, wondering what they hell it was all about.

The stage for the rivalry was set in mid-1998, when Slipknot signed an extremely enviable seven-album deal with Roadrunner Records. A year beforehand, the label had been interested in signing Mushroomhead, but the band turned them down. “Roadrunner had a guy shopping us,” ex-frontman Jeff Hatrix said on a podcast in 2018. “And, at the time, we were making more at local shows than they were offering us in advance, and they wanted all of our merch […] The money just didn’t make any sense.”

Hatrix claims outright that Slipknot were a homemade imitation of Mushroomhead. “They are Roadrunner-invented clones of us, and everybody knows it,” he said in 2007. Drummer Steve “Skinny” Felton was more aggressive towards the alleged rip-offs, when he ranted that Slipknot “traded a platinum record for dignity, honour and respect”: “Corey Taylor says, ‘You cannot kill what you did not create.’ Maybe so – but I guess you can sure as fuck sell what you stole.”

Local magazine Cleveland Scene reached out to Roadrunner’s A&R director to get their side of the allegations. “I honestly [couldn’t] care less about your article and I have nothing to say,” came the reply.

Although Slipknot’s 1999 Cleveland show was the only time the debacle came to physicality, the two bands would trade vicious verbal barbs through the 2000s. In the May 2002 issue of Rock Sound, Taylor accused Mushroomhead of encouraging their fans to violence on that night. He brutally added, “I’ll fucking go to fucking Cleveland and grab every fucking one of them by their stupid fucking masks and I will put a knee to their faces until they pass out from loss of blood!”

Hatrix later admitted that he was indeed involved in orchestrating the events in 1999. “I know all the people who did it and I did personally paint [their] ‘Cleveland Supports Mushroomhead’ and ‘Slipknot Go Home’ signs. But I wasn’t there and I didn’t know the complete extent of what they were going to do. But, hey, these guys are men, right? […] Welcome to Cleveland, bitches!” The singer also accused Slipknot and their touring crew of harassing his girlfriend for wearing a Mushroomhead t-shirt near the venue earlier that day.

Hatrix et al. aggravated things even further in 2005, going so far as to perform concerts in their home state that mocked Slipknot. The eight men (together with one of their touring crew) dressed as The Nine onstage, playing samples that repeated, “The whole thing, I think it’s stolen” – a parody of the words that open their debut album.

“People started chanting, ‘Fuck Slipknot!’,” one concertgoer told Blabbermouth. “Waylon [Reavis, vocalist] then screamed, ‘Come on, don’t be afraid to say it,’ which made everyone start the chant back up. The crowd was brutal and I loved it.”

By the time 2007 rolled around, Mushroomhead were still continuing their crusade, slinging insults such as “straight-up frauds” and “the NSYNC of heavy metal”. However, they hadn’t been met with any further response from their rivals, who were becoming the mainstream face of a generation of rock music. Slipknot’s latest album, Vol. 3: The Subliminal Verses, had climbed to #2 on the American charts, while Mushroomhead’s most recent, Savior Sorrow, had barely scratched the top fifty.

With an ever-increasing number of outsider eyes on them, Slipknot began to take the more diplomatic route, refusing to add fuel to the fire. “I’m tired of it,” Taylor said in a 2005 radio interview. “We’ve tried everything that we could to squash this between ourselves and Mushroomhead. I’ve even come out and said I wish them nothing but luck. I don’t care. It’s not that big a deal to me.”

The decade-plus-long tensions seemed to have finally come to an end by 2010, as Mushroomhead, both publicly and privately, sent their condolences to Slipknot after the tragic death of Paul Gray. Since then, Taylor has regularly expressed interest in performing alongside his band’s former nemeses, wanting to curate a tour that will see the duo share stages with fellow masked rockers Mudvayne and Gwar.

More than 20 years after it all kicked off in Cleveland, the sustained Slipknot/Mushroomhead rivalry remains one of the 90’s most talked-about discords. It was the Metallica versus Megadeth of the nu metal era, escalated by fistfights, arrests and the internet. Today, both bands try to dismiss their past skirmishes as fan- and media-driven, each trying to downplay their own involvement in what was the most over-the-top feud in nu metal.