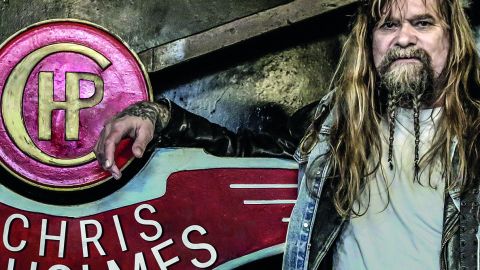 If life were fair, guitarist Chris Holmes would enjoy his rightful stature as one of the most celebrated riff technicians to lord over the Sunset Strip in those halcyon days of the 80s.

Instead, the ex-W.A.S.P. guitarist will forever be remembered for his über-drunky interview in The Decline Of Western Civilization, Pt. II: The Metal Years, during which he puts away nearly three bottles of vodka while draped over a lilo in his swimming pool, and boozily proclaims himself “the happiest son-of-a-bitch motherfucker there ever was” as his long-suffering mum looks on. Fast-forward 28 years and poor Chris isn’t sounding so happy. His sophomore solo outing is an unmitigated disaster of tragic scale. Its tinny, lo-fi production makes early 90s black metal releases sound extravagantly overproduced in comparison, with a snare sounding like somebody snapping the side of an empty milk carton.

Worse, Chris’s gratingly atonal vocals, cruelly prominent in the mix, eclipse whatever scratchy riffs might lay buried in the background.

Bereft of anything catchy, C.H.P. is difficult to listen to for a number of reasons.