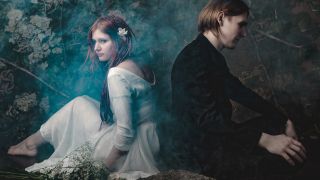 I t was on a mild November evening last year that something quite magical occurred in London.

The audience at the Islington Academy fell silent as they watched an enigmatic duo, accompanied by two chamber musicians, perform a spellbinding set of delicate, progressive songs. Their softly spoken, elfin frontwoman captivated the room as her passionate but sweet vocals embraced each tune. Unlike so many other prog shows, there was no nattering during the set and orders were whispered over the bar as no one wanted to disturb the serenity of the moment. That duo was iamthemorning, and their petite singer Marjana Semkina is in a reflective mood as she ponders the reaction they received that night.

“I was expecting people to be very loud, talking to each other and drinking, but I didn’t see any of that during our performance,” she reveals over the phone from the 21st-floor apartment where she lives in Russia. “Up until that tour, I was sure that our Russian fans listened to us so quietly because they’re awesome. But we had exactly the same reaction in the rest of Europe. It was a great feeling.”

Semkina and classical pianist Gleb Kolyadin formed iamthemorning in St Petersburg in 2010, and they spent the early part of their career performing to a predominantly teenage fanbase in their home country. Their 2012 debut, called simply ~, was independently released, and they became the first Russian act to successfully use Kickstarter to finance the follow-up, Belighted.

When I was 14 years old, I was absolutely miserable, but listening to Anathema’s albums was the greatest help.

It was during the early stages of its recording that Semkina struck up a friendship with Anathema’s Daniel Cavanagh and subsequently ended up backstage at Kscope’s fifth anniversary show in London. After meeting everyone, she says the post-progressive label were introducing her as “our future star” by the end of the evening. Just over 12 months later, the duo had signed on the dotted line to Kscope and released Belighted.

“It was a very lucky coincidence,” the singer says, “and I think our success in Europe all started with us signing to them.”

Despite their initial hurdles, it seemed the tide was turning, and supporting Polish band Riverside had already helped to spread the word among prog fans. After years of dreaming, they finally played their debut UK show on the Prog Stage at London’s Desertfest last April. Five months later, they embarked on their first European tour, with Norwegian art rockers Gazpacho. They even grabbed a spare moment in-between to launch a second Kickstarter campaign, this time for a lovingly packaged live album called From The House Of Arts.

The secrets of their success are down to a winning combination of luck, talent, sheer determination and relentless passion. Semkina modestly plays down her own role in all this but without those early introductions, it seems unlikely that she and Kolyadin could have expanded beyond the Russian borders quite so quickly as they did.

The last 12 months have been a maelstrom that looks set to gather more momentum with the release of the duo’s third album Lighthouse. Partly inspired by a visit to the infamous British suicide spot of Beachy Head, and partly by the lives of 20th-century novelists Virginia Woolf and Sylvia Plath, the record contains some of Semkina’s darkest lyrics to date.

“The main theme is to do with the progression of mental illness. It’s a conceptual album that looks at the diseased mind and one of the songs is even about electro-convulsive therapy [ECT],” she explains in perfect English. “The album has almost a circular composition – it was supposed to start and end with the song I Came Before The Water but we also wrote a postscript [called Post Scriptum], which gives the listener the chance to choose their own end to the story. He or she can choose to either continue the cycle or give the character up to the sea.”

Of course, it’s not the first time that Semkina has turned to such morbid reading material for inspiration. On Belighted, Os Lunatum’s dead narrator was inspired by the protagonist in Alice Sebold’s young adult novel The Lovely Bones, which The Lord Of The Rings director Peter Jackson turned into a feature-length film in 2009. She explains, “Once something has captivated me, it’s very hard for me to stop thinking about the story, and that was the way with Sylvia Plath’s The Bell Jar and her journals. Plath is a beautiful poet and novelist but people see her as someone whose work is only popular among whiny 15-year-old girls so she’s a tricky subject.”

Those bleak lyrics are set against the duo’s beautiful music, creating an unexpected mixture that’s both uplifting and melancholic. As with Belighted, Lighthouse was part-recorded in London and mixed by Marcel van Limbeek (Tori Amos), but production-wise, it’s a much bigger affair. Gleb Kolyadin’s piano was tracked in Moscow’s famous Mosfilm – Russia’s biggest and oldest film studio, where many orchestral soundtracks have been scored throughout the years – and they roped in a Russian children’s choir to add an extra layer to their sound.

Additional instrumentation came from a chamber orchestra comprising Russian conservatory students, as well as Porcupine Tree’s Colin Edwin and Gavin Harrison. Riverside’s Mariusz Duda also contributed guest vocals to the title track. The result fulfils the duo’s strong musical vision and, according to Semkina, is “more iamthemorning-ish” than its predecessor.

This idea of melancholy merging with beauty fits perfectly with the vocalist’s own personality. Despite writing about such morbid topics as death, mental illness and the afterlife, Semkina herself is engaging and chatty, with an uplifting and almost sing‑song rhythm to her speaking voice. In person and on stage, she comes across as happy, passionate and open, so how does she separate her two apparently opposing sides?

“I’m not the super-cheerful person that people see when they come to talk to me after the concerts,” she says thoughtfully. “But at the same time, I am. It’s very complicated. The songs I write are very dark but I’m not singing about myself – I sing about characters. I like to try to walk in someone else’s shoes. It’s like in theatre, where you have to feel that you are that particular person.

“I don’t have musical education so I have nothing to do with scales, keys or sheets of music – it’s all about emotion. You have to know exactly what every song is about and you have to feel it because you’re telling a story.

“Melancholic songs might make you cry or feel sad but it’s all about letting you know that you’re not alone with these feelings, because there’s someone else who feels this way. I felt like that with Anathema. When I was 14 years old, I was absolutely miserable but listening to their albums was the greatest help. Singing is definitely a form of therapy and it’s the best form for me.”

If Semkina represents iamthemorning’s emotional side then her musical partner Kolyadin is, according to her, “the brains. Gleb is a very wise man and he doesn’t let me go too far, otherwise we’d have dead birds on the cover! We’re very different and that is really what makes it work.

“He doesn’t talk to people, he doesn’t really know English and he doesn’t appear on social networks a lot,” she says, referring to her own maintenance of their Twitter, Facebook and YouTube pages. “But I think having just one person who is the mouthpiece is a very productive way to work.”

Judging from their track record, Kolyadin’s shyness certainly hasn’t done them any harm and Semkina’s personal touches have really helped create the duo’s image. From Constantine Nagishkin’s elegant cover art to the dried flowers and origami birds that Semkina has included with their Kickstarter rewards, everything falls together into a perfectly ethereal package. Yet it’s one they haven’t managed to export in full just yet.

Footage taken from the Belighted release concert in Moscow, where their crowdfunded live album was recorded, shows a blonde Semkina skipping across a stage that’s strewn with rose petals. Behind her is a full chamber orchestra, rather than just the two musicians they brought with them on last year’s European tour.

Touring with Gazpacho was definitely a career-defining event and it meant a lot to us.

At the moment, finances mean that such visual delights are reserved for their Russian audiences, but that doesn’t mean the duo aren’t itching to bring the full show out on the road in the near future. “I would love to tour more,” the vocalist says longingly, “but the touring part is very complicated for us right now.”

From the Russian visa system to the problem of finding suitable headliners, there are still a few very real barriers in iamthemorning’s way, but these are barriers they’re trying to work around.

“Touring with Gazpacho was definitely a career-defining event and it meant a lot to us. Of course, supporting someone like Steven Wilson would be great but that’s a bit of a fantasy!” she giggles.

Then again, iamthemorning have proved that fantasies can become realities. Only time will tell if they can make this particular dream happen.

Lighthouse is out now on Kscope. Visit the band’s website for more.